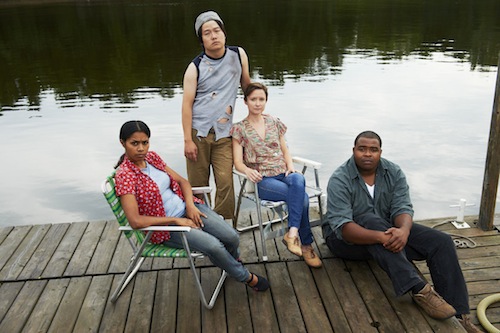 The Way of Water, which Frank Theatre is presenting at The Playwright’s Center through September 30, is not an easy show to experience. Set in Louisiana in the aftermath of the Golf oil spill, the play depicts the lives of two poor couples who are affected by the environmental ramifications of the spill. Excellently acted by a cast of four, it’s an emotional ride.

The play’s central character is Jimmy Robichaux (played by H.Adam Harris), a man who is as passionate about fishing as he is about life. At times, his emotions get the better of him. He’s the kind of person who can be filled with laughter and joy one minute, and then the next collapse into aggressive cynicism to those around him. He clearly deeply loves his wife Rosalie (played by Hope Cervantes), serenading her and holding her close, but also flirts with his best friend’s wife, Neva Skow (played by Emily Zimmer) when Rosalie is in the next room. His perhaps most complicated relationship is with his fishing partner and best friend Yuki (played by Eric Sharp), with whom Jimmy for some reason has ripples of jealousy and competition.

Jimmy’s emotional rollercoaster mirrors his physical health. A large man who was once a high school star wrestler, his body is now being destroyed from the inside by cancer caused by the chemicals used to break up the oil spill. In nearly every scene, Jimmy’s body is seized by convulsions, which sometimes seem to almost be set off by his anger.

Harris gives a tour-de-force performance as Jimmy. He captures the character’s larger-than-life exuberance, his insecurities, and his sweeping emotions. Cervantes also shows great range, and has a lovely sweetness as well as an ability to get to a place of deep sorrow. Sharp and Zimmer also give excellent performances as the couple that cares for Jimmy and Rosalie, but are limited by their own troubles.

Caridad Svich employs a short-handed writing style, where the characters speak in fractions or even one-word sentences. The whole play sounds like a poem, and the style forces the audience to pay attention to the connections between the thoughts of the characters, which traverse from the daily realities of their life, to the broader implications of the political world. The characters themselves understand these implications, but are at times too overwhelmed and stuck to do anything about it. How can they sue the oil company if they don’t even have enough money to put dinner on the table, much less pay for hospital bills?

This is not a script with many surprises, plot twists or revelations. You know from fairly early on what is probably going to happen. As a result, part of the experience of watching it is knowing that things aren’t going to work out for Jimmy and Rosalie, and witnessing the excruciating ways that they are screwed over by life.

The play’s politics intersect environmental issues, health care, and our country’s gross disparities between rich and poor. Svich never uses a heavy hand with these issues, however. They serve as the context, rather than the drama itself. The play’s story really lies in the relationship between the characters. It’s ultimately a play about love and of survival.