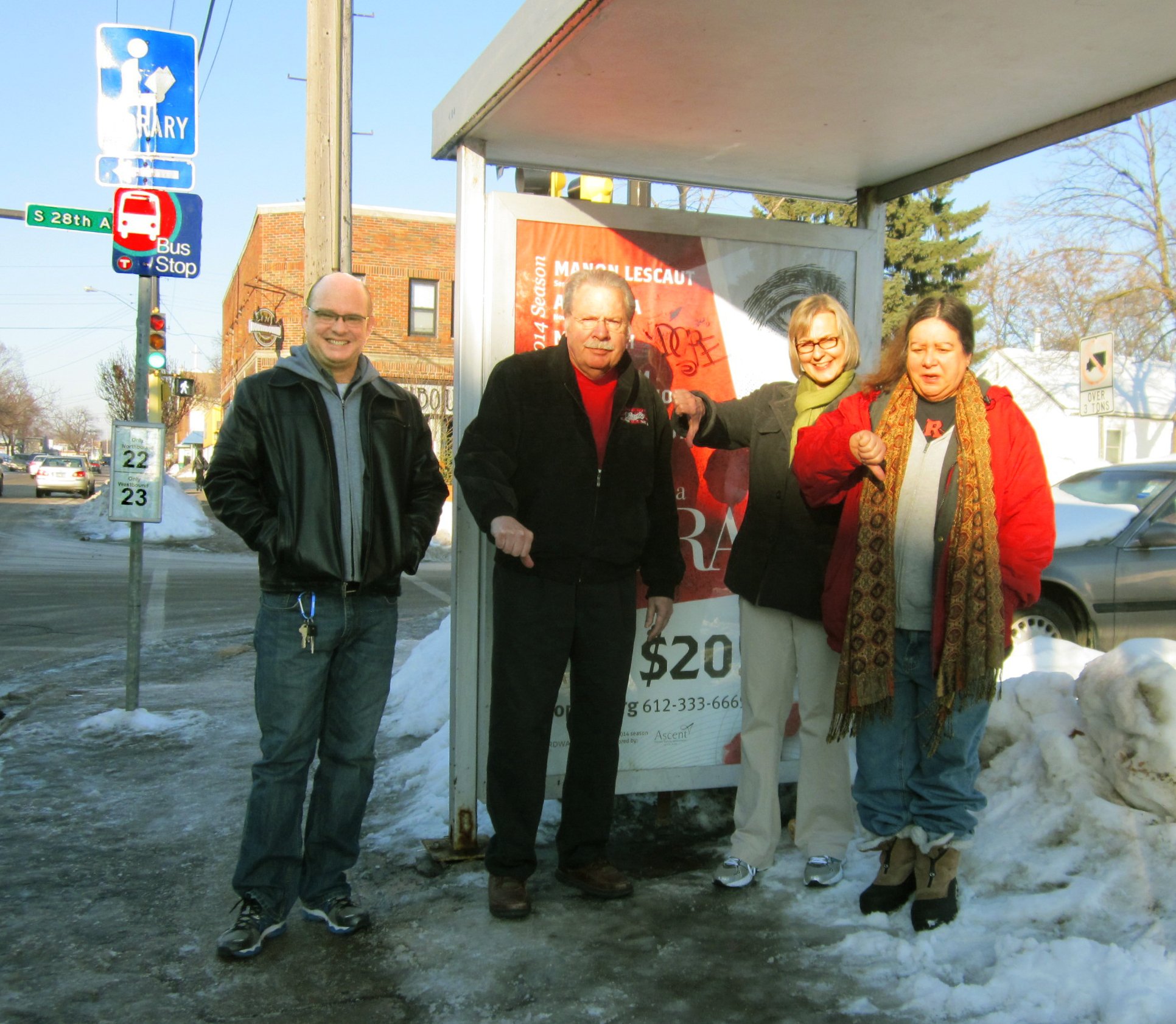 Back in February, the Star Tribune ran a story on the front page of the Metro section entitled “Mpls. Reclaims Bus Shelters.”1 The article described the city’s plans to acquire 177 existing bus shelters from CBS Outdoor, a privately owned company, and transfer management to Metro Transit. This decision came in response to citizen complaints about CBS Outdoor’s poor maintenance of the shelters.

The article quoted one citizen who described a CBS shelter as “crummy” and who went on to say, “If we want to attract and keep businesses on this section of East 38th, we have to make it look inviting. Please help!” The article did not name the citizen, but I knew immediately that it could only be one person—Francy Scurato.

Francy lives in the condo building on the southeast corner of 38th St. and 28th Ave. I first met Francy in 2010 when I interviewed her for a story on her efforts to form a neighborhood block club.2 At that time, she mentioned that her next goal was to get the bus shelter on the northeast corner of the intersection replaced. The shelter, she pointed out, was an eyesore and an unpleasant place to wait for the bus. It had only two panels or sides and thus offered limited protection from the elements, it had no place to sit down, and it was a magnet for graffiti and trash.

I recently sat down with Francy at Keen Eye Coffee (2803 E. 38th St.) to hear about her bus-shelter crusade in the last four years. She said that she had written letters and sent e-mails to city and county officials and the owner of the shelter, which turned out to be CBS, and generally griped to anyone who would listen about the shelter’s condition. Finally, in 2011, CBS replaced the shelter with an upgrade. The new one had a third wall, a bench inside the shelter, and, of all things to have in a bus shelter, a bus schedule! Francy was happy.

Her contentment lasted for only a year. One Sunday morning, a car crashed into the new shelter and destroyed it. CBS replaced it with a shelter that was even worse than the original one. “It looked like it came from the bus-shelter graveyard,” said Francy. “It was already ‘rusticized’ and ‘graffiticized.’” Francy and I went across the street so she could show me firsthand the rusty footings, chipped paint, and piles of dirty snow inside the shelter. She bemoaned the fact that after four years of lobbying she was back to square one.

People who never ride a bus may wonder why a decent bus shelter is so important. Francy rides the bus to her jobs as a substitute teacher and bakery assistant and appreciates the relative comfort a bus shelter can provide. Beyond that, she says, a poorly maintained shelter disrespects bus riders and makes them feel unsafe. Everyone who lives in the neighborhood should be concerned because a rundown shelter detracts from the businesses that are trying to revitalize the commercial node.

The city assumed ownership of the old shelters on Mar. 1 and will start replacing them over the next five years. Francy was thrilled by the news. She’s not expecting a new shelter with heat lamps and piped in music (although a light would be nice). She is expecting better maintenance from Metro Transit. Neighbors will be able to participate in the Adopt-A-Shelter program, which was not possible under private ownership. She believes that she has made the case for quick replacement of the 38th St. shelter.

What’s next for Francy? She hopes to reignite her petition drive from two years ago for street lamps. She believes that having more light from the light-rail station to 28th Ave. will draw more people to the corner businesses. She also envisions a lively streetscape with benches, planters, and flags and maybe even a street festival. Francy is starting small—in this case, the bus shelter—and dreaming big.