I am really looking forward to the opening of the Harriet Brasserie, in the old Cafe 28 space in Linden Hills.

I got to meet the owner, Alain Lenne, and his chef, Fernando Silva, a couple of weeks ago at the first anniversary party at Tilia, Steven Brown’s Linden Hills cafe. The talented chef Brown knows how to feed a crowd, with an unending stream of platters loaded with pulled pork sandwiches, jerk chicken, thighs, corn dogs, gravlax, farmstead cheeses and more. As you might expect, the place was packed, and the decibel level as high as ever, so I asked Steven about the best time to beat the noise and the crowds.

It turns out that the best bet at Tilia is to arrive early at lunchtime, but it sounds like there is never a really slow time, unless it’s after 9 p.m. I also got to chat with Jack Jefferson, who is now a cook and runner for Tilia, but previously waited tables at restaurants all over town. We talked about the foibles of past and present restaurant critics – Jack is good at spotting critics who visit incognito – and I got a few useful tips – like, those wigs don’t really fool anybody, and there’s no point in making reservations using a fake name if your real name shows up on the restaurant’s caller ID.

Jack introduced me to Alain, a big gregarious French guy and Fernando, a native of Brazil. I didn’t recognize Alain, but he recognized my name immediately – he remembered what I had written about him back in 1998, when he was a waiter at Tiramisu in Minnetonka, and could recite it all by heart, or at least the phrase “polished professional French waiter.” (Actually, the full quote was, “We had a polished, professional French waiter on one visit and a well-intentioned young server with little training on another.”)

Over the course of several beers, I learned a lot of Alain’s life history, starting with the fact that he grew up in Lille, in the north of France. He followed his heart to Minnesota, where his first job was waiting tables at the Pannekoeken Huis. Fast forward to the present, and he now is the proud owner of La Belle Crepe, 825 Nicollet Mall, which features a menu of sweet and savory crepes, plus pho, the famous Vietnamese noodle soup. Alain boasted that theirs was the best pho in Minneapolis, made with real homemade meatballs (some Vietnamese noodle shops buy theirs), and a savory soup stock. 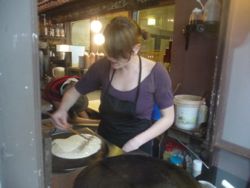 So of course, a few days later,  I had to head over to Nicollet Mall to try these specialties. On my first visit, I chose the mango crepe with almond cream ($4.99), which was spectacular, made to order with just the right eggy texture and the right degree of browning. On a return visit, I opted for the spicy crab melt, topped with cheese, peppers, onion and a spicy creme fraiche ($6.49). The spice tended to overpower the crab, but still a very enjoyable dish.

As for the pho, I wouldn’t really rate it as the best in Minneapolis — most of the versions served on Eat Street offer more meat and a more savory broth. But it’s good enough to be enjoyable, and it might be the best pho on the Nicollet Mall.

But the other news of the evening was that Alain and Fernando, who was an agronomist back in Brazil and more recently executive chef at the French Meadow, are in the process of opening up the Harriet Brasserie, right next door to Tilia in the former Cafe 28 space. Fernando says the cuisine will be New American food, but it wasn’t easy to pin him down on just what that means, except that it seems to be a pretty flexible concept, including everything from walleye and wild rice, and  a “salade Nicoise-esque”, to coxinhas, Brazilian fried dumpling. Coxinhas are traditionally stuffed with chicken and a creamy Brazilian cheese, but Silva will prepare them with duck confit and Brillat-Savarin.

When we spoke last month, Lenne said they hope to open the Harriet Brasserie by May 1, but it now looks more like the first week in May. For the first week or two, they’ll only be open for breakfast and lunch. But by the third week in May, they hope to have their wine and beer license, and to start serving dinner. The plan is to have six beers on tap, including beers from Harriet Brewing, and a selection of 10 wines, all available by the glass or by the bottle.