“I don’t make art,” Lakota artist Francis Yellow said during an open studio session at All My Relations Gallery. “I don’t call myself an artist. People don’t know what to make of it when I say such things.”

The soft spoken artist walked around the oti (home) made out of canvas that he is painting for the opening of AMR’s Mni Sota: Reflections of Time and Place exhibit, which opens November 4. He is making the oti in the same way that his ancestors made them, he said, though he is using different materials- canvas, instead of animal hide, with modern paints and brushes. But the sources are the same. “The sources come from mother earth,” he said.

Yellow makes the oti in the same way that his ancestors did. “In order for me to do this in a powerful way is to get into the right frame of mind,” he said. He slows down, and gets into a consciousness of heart, mind, body and spirit. He doesn’t create the oti for an “elite market,” but rather the whole process is about “sustaining relations and sustaining life,” he said.

Yellow said the Native American Community Development Institute (NACDI), which runs AMR, asked him initially to make two different otis, one traditional and one contemporary, but in the end he couldn’t make such a distinction. “Traditional is a western concept,” he said. “Our way of making an image is not symbolic, it’s not representative. It’s our way of life, our family system.” 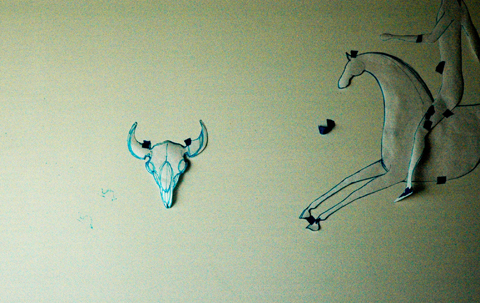 Yellow faced resistance when he went to art school, both in undergraduate and graduate institutions. In undergrad, he was told to “quit doing those themes”, and in grad school he was told: “quit hiding behind your ethnicity.” He disregarded this advice, and has sought to create work in the “friendly lifeway” tradition of his people.

During the open studio session, Yellow walked around the oti, explaining each of the images, from an image that depicts a making relatives ceremony, to an image of a buffalo hunter. Though Yellow said that it’s very uncommon for Native Americans to depict buffalo hunting in art, because it has become so stereotypical, he’s chosen to include it. “It’s essential to life,” he said. Also included are images of a fasting ceremony performed by adolescents, images of war, including Native Americans fighting each other, and a Native American stealing the American flag from a U.S. soldier, as well as other symbols of Native American history and identity.

Yellow explained that before he begins to paint, he smudges himself, and gets ready to work. Many hours he works, doing the repetitive motions of filling the colors in. “In lifeway these things are a way of making something different than art,” he said. There’s a wisdom to his practice, a wisdom that comes from his tradition, of honoring the body, and mother earth. “Every person has a responsibility to have their own relationship with life,” he said. “All this wisdom comes from close contact with life.” 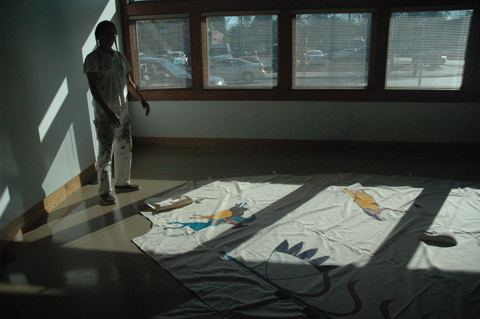