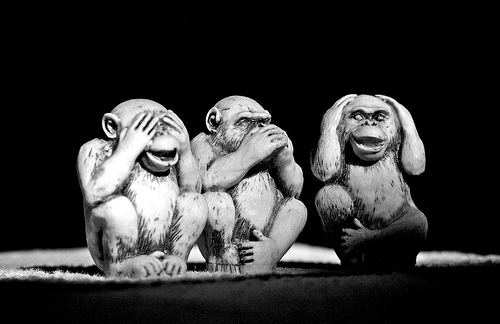 There’s a guy I’ve gone out with a couple of times; it’s gone well, and I was looking forward to the next date when I saw that on Facebook he called a certain female politician with whom he seriously disagrees (for the record, so do I) the c-word. The one with four letters, used to insult a woman. I showed my friends, and they said to cut him off—any guy who would ever use that word is a sexist jerk. I’m not so sure-he’s pretty outspoken, but that’s one of the things I like about him. I’d rather he didn’t go there, but I don’t know if I’m ready to entirely write him off just because of it. What do you think?

Don’t write anyone off completely because of a single word! Yeah, I find that word offensive, too, but words are just letters and a few letters can’t tell you that much about a person. We all have our sensitivities and just because he finds a word acceptable and you don’t, doesn’t mean you won’t mesh in other ways. You both disagree with this certain female politician and have enjoyed some dates together, so that’s a start!

I remember many years ago when my mother told me that she was offended when I would say that something sucked. She thought it was somehow anti-gay because gay men give blow jobs. I told her she was crazy, women give men blow jobs too (okay, that’s maybe something that we could argue about separately, but bear with me). Anyway, she was offended by that term, which I, her lovely daughter, used frequently. I am pretty sure she’s over that one. Maybe because 90% of the world uses it on a daily basis. My point is that we all have different sensitivities to words. I don’t think that our word usage says much about us as people. I curse like a sailor and don’t know how to shut my mouth even when there are kids (yes, kids!) around, but I don’t think I am a bad person. I’ve even said the c-word accidentally in the heat of an anger-filled moment when the most offensive thing I could think of came to mind. (I get really angry when it comes to airlines…) Yeah, he put it in writing, so it wasn’t a slip of the tongue or anything, but maybe no woman has ever explained to him why that term can be seen as super offensive. Because yes, I think women are more likely to be offended by that one.

I’ve met guys who seemed fabulously charming and wonderful. We’ve had tons in common. Then they say something like “oh that’s gay,” which totally makes me jump back and start wondering what kind of homophobe I’m dealing with. Usually the dude doesn’t turn out to be a homophobe at all, but has somehow adopted that term into his vocabulary and hasn’t thought to or hasn’t been able to remove it from his daily speech.

When you’re dating, I think it’s most important to consider A) whether or not you have fun hanging out together, B) if you share similar values, and C) are you (or could you be) attracted to each other? If you’ve got all those things going for the relationship then give it a try for a little longer. Learn more about him. Don’t decide he’s an asshole because he used one word that offends you. People aren’t perfect, and they deserve a few chances. If you said one thing that he found offensive or weird, wouldn’t you want him to give you the benefit of the doubt and put in the time to really get to know you and find out more about you? I think we all would like that from those whom we date.

Dating is hard. Give this guy a chance. Maybe this will go somewhere and then you will have the opportunity to teach this guy why he should avoid that four-letter word at all costs if he doesn’t want to turn people off and offend a Facebook wall full of people. Using one offensive word doesn’t make him a sexist jerk. He could be a sexist jerk, but I encourage you to keep seeing him until you actually find that out! He could just be ignorant. Ignorance is easily changeable.

Tell your friends you appreciate the advice, but you want to actually get to know him instead of making assumptions. I always ask my friends for dating advice, but I rarely or never ignore my gut feelings to follow their advice. I am who I am and I do what feels right for me. No one can give me the perfect advice; they can influence my thought process, but the final decision lies with me. I recently did something that was the opposite of what my friends were telling me to do. I immediately felt better and was glad I stayed true to myself. If you don’t feel ready to kick this guy to the curb, don’t! You’ll feel better if you give him the chance and find out what he’s really made of. If you find he is a sexist jerk (or just a non-sexist jerk), you won’t have lost anything but time and at least you’ll know for sure.

If we were all perfect, we’d have no one to yell four-letter words at,
Nicky