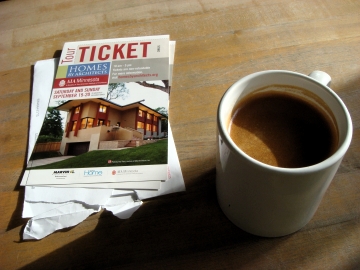 Hunched over a table at Moose & Sadie’s, Aunt Betsy and I scanned the map in Architecture Minnesota. One of our planned stops was in Apple Valley, the southernmost point on the Homes by Architects tour. “We may need to stop for Twizzlers,” said Betsy.

There were a total of 20 homes on this year’s tour, but we’d only be able to see a few of them: Betsy had to get to Park Square Theatre by 2 p.m. to see Becky’s New Car. The only house we regarded as a must-see was the Apple Valley home, designed by a trio of architects Betsy knows through her work at a local architecture firm not represented on the tour this year. The others, we chose for location. 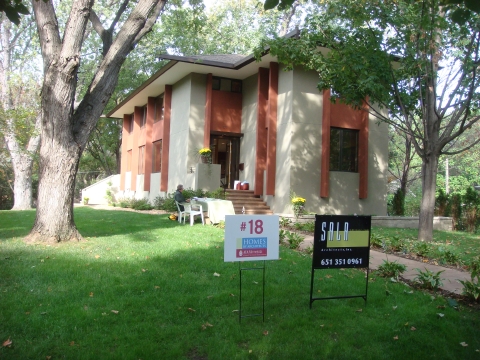 Our first stop was the only St. Paul home on the tour, a Mac-Groveland residence by Kelly Davis, Tim Old, and David Ferguson of SALA Architects. The house was designed by e-mail, explained Davis, as the owners were in Japan at the time. The most immediately striking feature of the house is its verticality, a feature that minimizes its footprint and makes its rolling lot seem especially spacious. Inside, a Japanese influence is apparent in details like a translucent screen near the front door and bamboo flooring. Big windows open one side of the house wide, while the other side is peppered with tiny peek-a-boo windows. Betsy and I both appreciated a thin window allowing a view from one of the children’s rooms down to the living room. Betsy said it reminded her of sitting at the top of the stairs and peeking down when her parents had parties.

The house, explained Davis, came in at a relatively affordable $175 per square foot (comparable homes can easily approach $300 per square foot) for about 4,000 square feet. Guessing that we were silently multiplying 175 by 4,000, Davis pointed out that it amounted to considerably less than a million dollars. True. 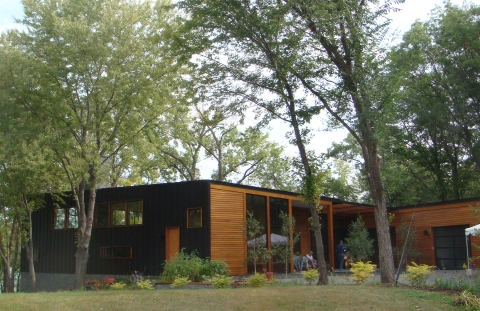 Our next stop was Apple Valley, where Tim Alt, Roger Cummelin, and Chad Healy of ALTUS Architecture + Design were proudly displaying their lakefront showstopper. If you have a lakefront lot, you’re going to want to see that lake, and there’s no missing it from almost any room in this house. A dramatic wall of windows angle upward to accommodate a loft space, under which is tucked a ridiculously cozy playspace for children. Bedrooms are housed in their own wing, connected to the main body of the house by a breezeway that includes a three-season porch with a fireplace. (Another nice small touch: a pass-through window to the porch from the kitchen.) The house is exquisitely sensitive to its natural surroundings, but fortunately the ALTUS team made no attempt to match the neighborhood’s dominant architectural style, a pretentious patriotic pastiche. 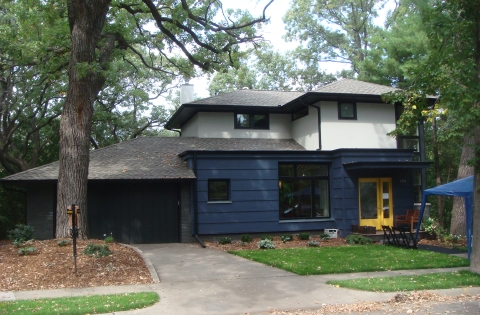 Stopping for re-caffeination in Eagan, we continued north to Minneapolis, where we took a look at a rambler retrofitted by Leffert Tigelaar, Bill Nagel, and Lauren Brown of Choice Wood Company. They’ve christened the house “Creekside Oasis,” and though the creek (Minnehaha) was temporarily dry, the remodeling had created a multitude of spots to sit and enjoy the woodsy view. There’s a lower-level patio area, a screen porch, and a little deck off the master bedroom—plus, explained Tigelaar, there would theoretically be room for yet another seating area atop the porch. The overall effect is of that of a swank treehouse, the kind of thing the Swiss Family Robinson might have built after cashing in on their movie royalties. 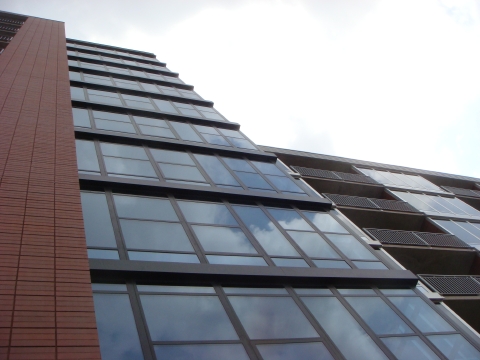 Betsy dropped me back at my car in the Warehouse District, and on my way out of downtown I couldn’t resist following the signs to yet another home on the tour—this one a condo in the Bridgewater building off Gold Medal Park. The condo was designed by Mark Nelson and David Heide of David Heide Design Studio, but it took me a while before I could even concentrate on the interior; it’s a corner penthouse, and it’s hard to believe that there are many better views to be found in any Minneapolis residence. Standing in the corner windows, you have a panorama stretching from the downtown skyscrapers past the Guthrie to include the Stone Arch Bridge, Gold Medal Park, and the new 35W bridge, with a Currier and Ives view of Northeast Minneapolis as a backdrop.

The residence itself is cleverly laid out to open the living room, dining area, and kitchen to the unbelievable view while creating private nooks for the bedrooms and bathrooms. The master closet and bathroom seem so spacious that I wondered whether the owners had somehow purchased a wormhole. I’m guessing that if a wormhole were to be had for sale, these owners could afford it; while the residence avoids gaudiness (okay, maybe that hanging-glass light fixture pushes it), it’s so redolent of high-roller luxury that I half expected to find kitchen jars labeled flour, sugar, and cocaine.

I had to end my tour there, but I was sorry to do so; visiting such cleverly-designed homes gets addictive, like popping M&Ms. The title of the tour—Homes by Architects—may seem redundant. Isn’t that like having a store called Books by Authors? What distinguishes the homes on the tour, organized by the Minnesota chapter of the American Institute of Architects, is that each is individually designed. The tour includes no cookie-cutter McMansions or “custom” homes in the sense of choose-where-you-want-the-TV-to-go custom. They’re homes designed for clients who appreciate—and, yes, are willing and able to pay for—homes that meet design challenges with style and personality, homes that are conversation pieces.

The homes’ architects are present at each stop, not just to pass out business cards but to watch people react to their work, like playwrights sitting in the back of the audience on opening night. Tigelaar seemed delighted to be asked about the possibilities for an empty rooftop expanse, ticking off the pros and cons of adding a railing, covering it with gravel, and even planting grass on it. “Being an architect is fun,” he said, smiling. “I love what I do.”