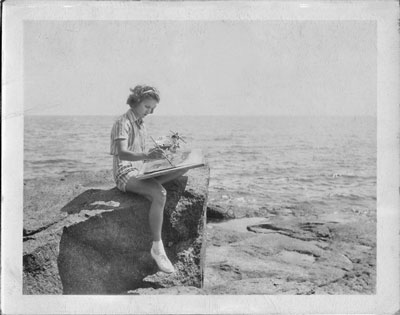 John Hunt took this photo of Frances painting on the North Shore. The painting is part of the show at the Undercroft Gallery.

Various traits—from eye color to ailments—often run in families, but artistic talent can also course through the veins of several generations, as evidenced by the members of the Hunt family.

St. Matthew’s Episcopal Church’s Undercroft Gallery is currently hosting Linked Lives—4 Generations of Hunts, an exhibit of paintings and photographs of the John and Frances Hunt family of St. Anthony Park. It’s more than an art exhibit; it’s also a history of the community, as the Hunts helped found several neighborhood institutions.

Joan Hunt Abbas came up with idea for a show featuring her sister, Susan, who lives in Madison, Wis., and their late mother, Frances, who died in 1997. Susan (who revived her art career after retiring) approached Peg Houck, the art chair at St. Matthew’s, about doing an intergenerational art exhibit there. “Initially, I thought we would just include my paintings and my mother’s, but I wanted to involve other family members too,” she said.

Joan lives in the same St. Anthony Park house that she and her siblings grew up in. “My parents came to [St. Anthony Park] early in their marriage and lived in our house for over 50 years,” she said. “My dad [John Hunt 1910-2004] got a job at Park Bank. He started as a cashier and worked his way up to executive vice president. He retired twice and ended up working there for 69 years [1927 to 1996].” John Hunt had leadership roles in many neighborhood organizations, including the St. Anthony Park Association and St. Matthew’s.

John Hunt loved photography, Susan said, and his work is featured along with photos taken by two of his grandchildren, John and Kristina Abbas, Joan’s children.

Susan points to her paternal grandmother, Eva Hunt (1884-1976), as one of the first known artists in the family. “My grandmother was raised like a proper Victorian lady—they were originally a British family from Canada,” she said. “She wanted to take art classes after she graduated from Central High School, but apparently my great-grandfather thought that art was not suitable for a lady!” Eva’s work also appears in the show.

The show features several of Frances Hunt’s paintings. Frances grew up doing ballet and painting and later got a scholarship to the St. Paul School of Art, Susan said. “At that time, Cameron Booth was teaching there.” Booth was called the “Dean of American Painters” by the Minnesota Historical Society, was well-known and had work in many museums. “When my mom took painting from him, it was just about the time of the WPA and the New Deal [the late 1930s and early 1940s], so her work has that character. It’s influenced by the Bauhaus and Ash Can School and has an industrial landscape approach, but she only painted until she had us kids.”

John and Frances Hunt had five children: four girls and one boy. “Growing up, we had poetry readings and singing at the table,” Susan said. “It was a very literate upbringing. We liked nature and my mother was a director at Northwoods Audubon Center in Sandstone for a number of years. She did many other things and I recently learned that she and another woman got the educational courses started at the library.”

The family encouraged the children to follow their dreams. “One sister does jewelry and synchronized swimming and another is a botanist who is also a master gardener, weaver and flutist,” said Susan. “Our brother is mechanical and has a heating and cooling business. Joan is immersed in raising her family and likes needlework.”

The show, which runs through Dec. 1, is “an homage to my mother because she had quite a bit of talent,” said Susan. “Had she continued, I’m not sure where she would have gone. But there’s certain joy in seeing her work. Mostly, I would like people to walk out and feel as if they’ve been with a family.”

“Linked Lives: 4 Generations of Hunts” can be seen in the Undercroft Gallery at St. Matthew’s Episcopal Church, 2136 Carter Ave., Tuesday through Friday from 9:30 a.m. to 2 p.m. and after church services on Sunday. Find out more at www.stmatthewsmn.org or call 651-645-3058.

Natalie Zett has been writing for the Park Bugle since the early 1990s. Her sowrk has appeared in Metro Lutheran, Amiercan Jewish News, Minnesota Monthly and Other Side magazine.