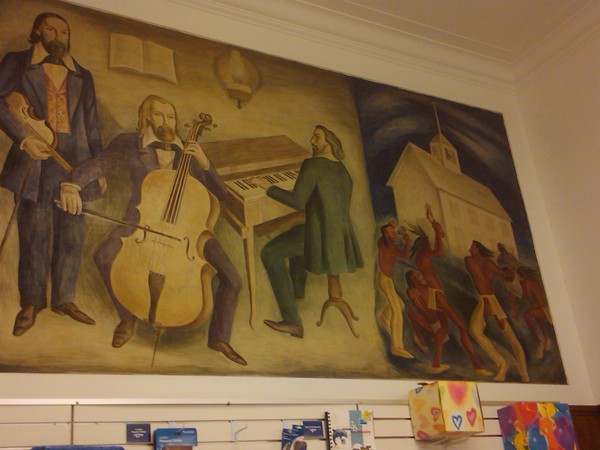 I missed the postal carrier today when she stopped by to deliver the new Monfrotto monopod, and so ventured to the Hutchinson post office. The line was longer than usual, and when my turn came, I learned this was their busiest day of the year.

During my wait, I noticed a WPA mural high on the wall behind the clerks, and mentioned it to the young woman who was cheerfully helping me. She had never heard of the WPA, but knew the mural was painted as part of a government program to help out artists in the Depression, and that the presence of the artwork placed the building on the National Register of Historic Places.

I was charmed that she’d remembered the substance over rote memorization of the program that created the art. Noting my interest, she went back into the sorting room and returned with a folder of photocopied articles about the mural’s artist. She gave me one and we chatted about the image behind her: stockaded settlers on the left, the Hutchinson brothers making music in the center, and Dakota men about to torch a school, presumably in 1862.

She pointed out that the image was of its time–1942–and a more positive image of Little Crow now stands by the new bridge at the north end of town. Given the line behind me, probably best not to bring up what the citizens of Hutchinson did with the real Little Crow in 1863.

The lines long and the modern town conservative, unwisely for me to dawdle over the fact that the Hutchinson Family sang edgy tunes, promoting  abolitionism, women’s rights and community organizing, and toured England with Frederick Douglass. The article the clerk handed me for later reading, “Mural Master” from Minnesota Monthly in November 1997, provides a brief biography of the mural painter, Elsa Jemne. That last name might be familiar to St. Paul residents, for Elsa and her husband Magnus designed the Jemne Building, once home to the Women’s City Club and the Minnesota Museum of American Art.

According to one biographical note online:

As an important Minnesota artist, Jemne was an inspiration to other women, and in 1921, she helped found the St. Paul Women’s City Club (former home to the Minnesota Museum of American Art) to help promote women’s rights.

The Art Deco building now houses an architectural firm, so I’ll assume it’s in good hands, though Elsa’s murals were gone long ago.

A small historical sidenote–but one that illustrates the connections that tie a small town and a big city artist together.