Increasingly, American Indian children in Minnesota are ending up in foster care, according to a study recently released by National Council of Juvenile and Family Court Judges. The study found that across the nation, children of color — especially African American and Native American children — are entering into foster care at higher proportions than the general population.

The study uses the “disproportionality index”, developed by Robert B. Hill, which divides the proportion of children in foster care of a given race by the proportion of the children from that racial group in the child population. If the calculated ration is greater than 1.1, that that population of children has a disproportional representation in the foster care system. The two racial groups in Minnesota that were calculated to have disproportional representation of children in the foster care system in 2009 were African Americans, with a 2.5 ratio, and Native Americans, with an 11.6 index. The ratio for African American children had decreased from 3.6 in 2004, but the ratio increased for Native American children, up from 7.3 in 2004. As a comparison, white children had a ratio of 0.6 both in 2004 and 2009, Asian children remained steady at 0.4, and Latino children decreased from 1.4 to 0.8.

Another study published in 2010, supplied by the Minnesota Department of Human Services, the Minnesota Child Welfare Disparities Report, gives statistics about the disparities in the greater child welfare system. That study found that American Indian children were more than eight times as likely to be subject of a neglect report, and African American children were five times more likely. The report also found that American Indian children were placed in out of home care in 2008 at a rate “more than twice that of any other group, and [were] more than 12 times more likely than a white child to spend time in placement.” African American children, meanwhile, were 5.3 times more likely than white children to end up in out of home placement.

A Long History of Child Displacement

The history of Native American children being taken from their homes is long and complex. Janice LaFloe, from the American Indian Family Center (AIFC) attributes the high disparity of Native American children in foster care to the specific needs of the community. “When you take a look at the history of who American Indian people are, there’s a significant distrust of any system,” she said. For years and years, American Indian people have worked together to protect their community, as decisions were made for them, through the signing of treaties and breaking of promises, through the forced system of tribal governments and the forced assimilation of taking children into mission schools, according to LaFloe.

Probably the most disturbing part of this history were the boarding schools that Native American children were sent to beginning in the late 19th Century and continuing throughout the 20th century.

“The forced removal of children to go to boarding schools was the most detrimental thing you could have done to Indian community,” LaFloe said. “There was a whole generation or more of children removed from their homes. The amount of abuse that happened to children in those boarding schools led to a perpetual cycle of learned behavior that surfaced and continues to play out.” According to LaFloe, boarding schools undermined traditional ways of raising children.

Children were also taken out of their homes at high rates and placed with non-Native families. According to B.J. Jones’s “The Indian Child Welfare Act: The need for a separate law,” published in 1995, before the Indian Child Welfare Act (ICWA) was passed in 1978, “as many as 25 to 35 percent of the Indian children in certain states were removed from their homes and placed in non-Indian homes by state courts, welfare agencies, and private adoption agencies.” In Minnesota, a quarter of Native American children were removed from their families and placed in non-Native homes, according to Jones.

In 1978, the U.S. Congress enacted the Indian Child Welfare Act, which gave tribal governments more of a say in child custody cases that involved Native children.

According to the National Indian Child Welfare Association’s Website, ICWA allows a child’s tribe and family to be involved in decisions for the child, and they can petition to transfer jurisdiction of the case to tribal court. A child must be a registered member of a tribe to apply for ICWA. Under the law, caseworkers must provide “active” efforts to the family (such as providing services to the family to prevent removal of an Indian child and reunifying a child with their parent/custodian), and must involve the participation of the child’s tribe in planning decisions, according to the website.

Poupart has personal experience with the issue. He watched his sister, as a teenager, placed in numerous homes, and ending up committing suicide. “It’s a reminder of the failures of the system,” he said.

According to Poupart, the problem isn’t that people aren’t following the ICWA. “People are following the law, but it hasn’t impacted the numbers,” he said.

The professional practice of social workers is in part to blame, according to Poupart. Social work, historically, is based on the mantra of “do no harm,” he says. “In my eyes, social workers have done all kinds of harm to Indian people.”

Janice LaFloe agrees that many in the child protection system are not educated in the unique cultural practices of the American Indian community. “You often don’t find informed, culturally sensitive social workers.” In her work at Ramsey County, some of the concerns and issues revolve around the decisions child protection workers make that are “so subjective” and “based on one person’s ability to understand the dynamics of a culture.”

According to LaFloe, every county in Minnesota handles ICWA a little bit differently. AIFC has been working with Ramsey County for a few years through a program called Nokomis Circle to specifically address the issue.

LaFloe sees a major problem when social workers develop a plan to get a child out of child protection. When child protection comes to a family’s house, it’s an “imposed, threatening relationship,” she said. “It doesn’t necessarily inspire cooperation. It usually puts a lot of families on guard.”

“There are time limits about what you have to get accomplished in order to get the child back,” she said, which often amounts to a year or less. If there’s addiction, and a family needs to go through treatment, a year isn’t enough time.

Kelly  Sarenpa, a Senior Social Worker at Hennepin County and member of Leech Lake Band of Ojibwe,  believes that stereotypes play a role in the high numbers of children being taken from their home. She believes more Native American staff would aid the problem. The number of Native staff has actually declined in Hennepin County, she said. As funding for the hiring of minorities has declined, so have the numbers of Native American staff. Even when non-Native Americans get training, she said, there are certain things they won’t be able to understand because “they’re just not Indians.” 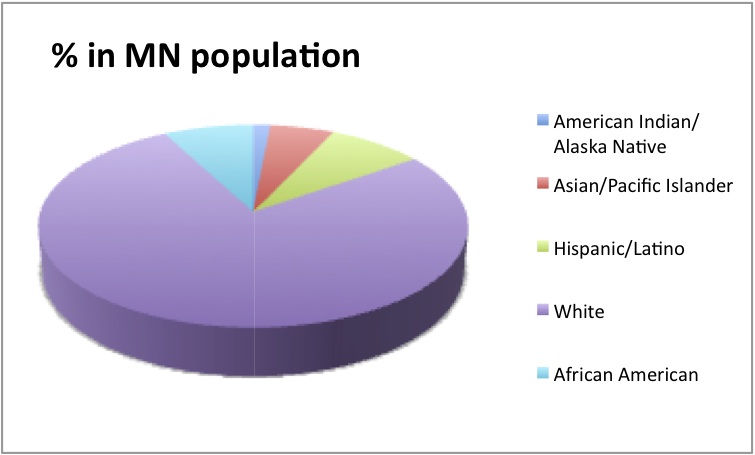 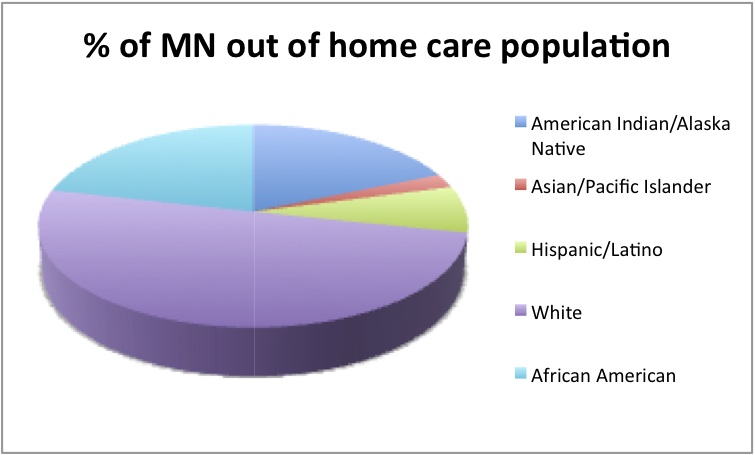 Erin Sullivan Sutton, the assistant commissioner for Children and Family Services at Minnesota Department of Human Services, said child protection is just one of the issues that affect Native American disproportionately. Other areas include health and criminal justice.

According to Sutton, “neglect” has been the primary reason that Native American children have been removed from their homes, based on allegations of inadequate supervision. According to the DHS website, more than 60 percent of child protection reports in 2009 were allegations of neglect. They define neglect as the failure to “supply a child with necessary food, clothing, shelter, medical or mental health care, or appropriate supervision, protect the child from conditions or actions that endanger the child,” and “Take steps to ensure that a child is educated according to the law.”

“We know that American Indian families are in deep poverty,” said Sutton. “There’s a strong correlation between poverty and out of home placement.”

A child’s “safety” is the key, according to Poupart. “It’s a very constrictive word… if the dishes aren’t washed, the floors aren’t swept… you have to ask what is behind that?” Perhaps there are beer cans or alcohol present, or children have thin outerwear for winter months. “These are the norms for poverty-stricken people,” he said.

Poupart sees the solution to the disparities involving the higher education institutions where social workers receive their credentials. “They have absolutely no training, experience, or exposure at building relationships with the community. They go into work on the issue with half a toolbox. I think they have to equip themselves better by learning how to work with American Indian families.”

According to Dawn Blanchard, one of the goals of DHS is core foundation training. She hopes that DHS can partner more closely with University of Minnesota on social work training. “Education is key,” she said. “American Indian kids have highest the dropout rates. We aren’t getting American Indians going into this field.” She said the only institution that specifically trains social workers in ICWA is the University of Minnesota- Duluth program.

Is there a need for a statewide system?

Poupart believes that there should be an office of Indian Child Welfare in the State of Minnesota, which would operate on the basis that it knows best on how to handle these issues. “Right now we depend on the judges and the social workers, and the licensing facilities.”

When asked if ICWA was being followed, Dawn Blanchard, the Ombudsperson for American Indian Families with the State of Minnesota, said: “You’ve got to remember. This is a county-based system. There are 87 counties doing child welfare in 87 ways. It all depends on where you are.”

Blanchard says her office has said to the legislature that what is really needed is a state-based system, which would make it more consistent. “That is the biggest first move,” she said.

Kelly Sarenpa advocated for the White Earth and Leech Lake tribes to handle their own child protection cases, and got Hennepin County to sponsor the initiative.

According to Sutton, there was a slight increase in out of home placements in the two reservations after the transfer, followed by some decrease.

Sarenpa said that cross-cultural understanding also plays an issue in the courts. “In a court hold hearing, if the mom cannot communicate well with the judge, the kids may be more likely to get removed,” she said in an email. “If there were more staff who culturally and demographically matched the clients, they could possibly help the parent more at the initial hold hearing.”

Sarenpa said she has heard of many cases where a worker didn’t think a child should be removed, but the parent wouldn’t give the right info in the right way or clearly enough at a court hearing. “It’s all up to county judges and judges see social workers as a party in the case rather than being on the same team,” she wrote. “Social workers need more respect overall, their recommendations need to be valued by the courts more.”