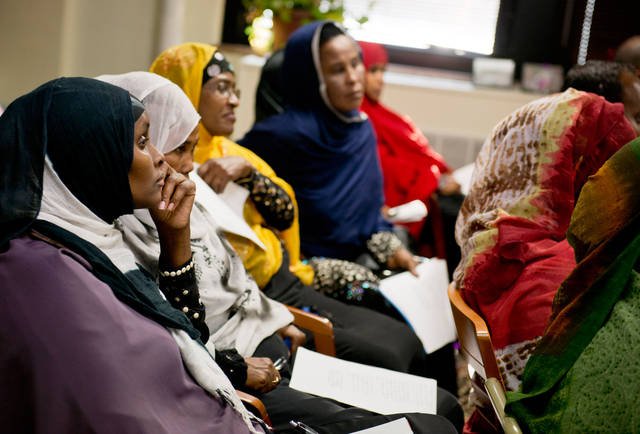 A group of Somali women listen to former Speaker of the Minnesota House Steve Sviguum explain the process of passing a bill in a workshop entitled “Governing 101” on September 6, 2013 in Sabathani Community Center. (Photo by Amanda Snyder)

The bill would have provided $170,000 to Isuroon, a nonprofit organization that Weli founded that is dedicated primarily to Somali women’s health issues. Her proposal made it into the health omnibus bill but was blocked because of a language loophole.

“I was heartbroken because I didn’t know how bills are funded,” Weli said. “I wish somebody had told me [how to write a bill].”

Now, Weli is partnering with Steve Sviggum, a University of Minnesota Humphrey School of Public Affairs legislative fellow, to teach members of the Somali community about state government.

“This is a group of people who want to live the ‘American dream,’” Sviggum said. “I’m hoping to help in a very small way to provide that opportunity to them.”

Sviggum, a former University regent and Republican state legislator, introduced legislative basics — including the process of passing bills — at a training session attended by about 30 Somali men and women Friday.

Weli said she hopes the new knowledge will inspire the Somali community to become more involved at the Capitol in order to eliminate issues like poverty and healthcare inequalities.

“We want to learn and be able to help ourselves,” she said. “And to do that, we need to learn the basics about how Minnesota is governed.”

Jacobs referred Weli’s proposal to Sviggum, who he said has an unmatched knowledge of the state legislature.

Despite Sviggum’s expertise, Jacobs said the partnership may seem “surprising” because of Sviggum’s storied history in the state Republican party.

“There’s a perception and maybe a little bit of a reality that the Republican party has struggled to reach out and have meaningful relationships with newer Americans and people of color,” Jacobs said.

Sviggum spent nearly 30 years in state politics, serving as both Speaker of the House and House Minority Leader.

“Here you have one of the most prominent Republican leaders in the state working with Somali women who are struggling to have a voice,” Jacobs said. “That’s just not a story you hear too often.”

Weli said she hopes to introduce a new bill to help Minnesota’s Somali community, but she’s not sure yet what it’ll look like.

Although they haven’t yet discussed writing a new bill, Sviggum said, he’s guessing the topic will come up in future trainings.

He said he’s hesitant to get too involved in a possible bill but is willing to advise Weli and help her make contacts.

Sviggum has already taken Weli to the state Capitol and introduced her to a few legislators.

“I don’t think I would lobby,” he said. “I think that would probably be beyond what I should be doing as a legislative fellow at the Humphrey school.”

After Friday’s training session, Sviggum said he was impressed with the group’s desire to become players at the Capitol.

At the end of the session, he handed out booklets with information about the state constitution and assigned homework for attendees to complete before the next training, which is not yet scheduled.

He also addressed the group in Somali and promised the training will pay off.