Every summer since 1976, a celebration called Summer Rendezvous or Stockade Days has taken place at Forest City in Meeker County.  Forest City’s replica stockade was built, according to its website, “as a memorial to the brave pioneers who settled here and sought safety behind its walls during the Sioux Indian Uprising of 1862.”

Like the Forest City Stockade, other historical markers reinforce the narrative that white Americans have been telling themselves about the U.S.-Dakota War of 1862:  that the Dakota attacked the innocent settlers, that the pioneers bravely fought to defend themselves, that the Dakota got what they deserved. As the 150th anniversary of the war approaches, Dakota people and allies are organizing around a different narrative – a story of a people driven to desperation by broken promises and starvation, and of genocide in Minnesota history.

I attended Stockade Days this year with my friend Sally Jo Sorenson, a blogger who lives in the area and showed me some of the sites and historical markers of the U.S.-Dakota War of 1862.  The Stockade Days celebration reminded me of the Renaissance Fair, with many people dressed in period clothing, and various vendors selling arts and crafts, and mementos of the “olden days.”

Some of the vendors sold tomahawks, knives, beaded sheaths and bags, and dolls that looked like Native Americans. All of the vendors and people that I saw at the festival were white. The U.S. Census Bureau shows Meeker County’s Native American population as 0.3 percent – fewer than 80 people.

Another example of Minnesota’s historical memory of the U.S.-Dakota War of 1862 is the site where Joseph Brown lived, near Sacred Heart, Minnesota.  In 1857, Brown was appointed by Governor Henry Sibley to serve as the United States Indian Agent, a federal appointment. 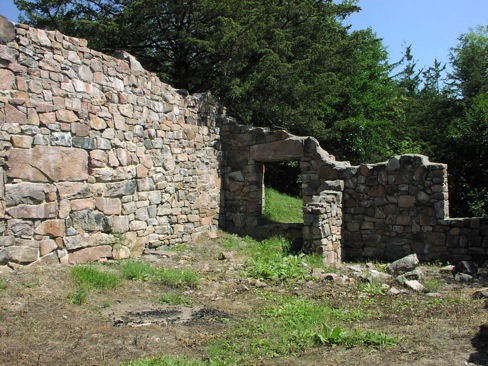 In 1858, Brown was responsible for leading the Dakota to Washington D.C., where they signed the 1858 treaty and forfeited their reservation on the north side of the Minnesota River in exchange for the promise of payments. They never received those payments, and instead were left devastated and starving. 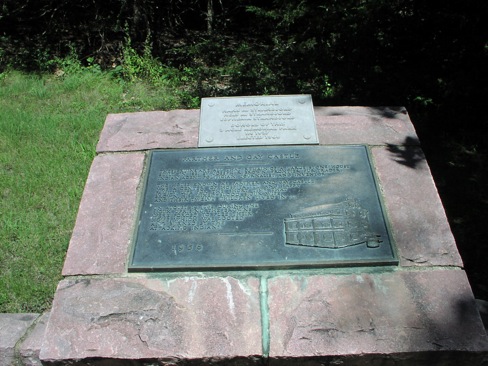 Brown was replaced as Indian Agent in 1861 by Thomas Galbraith, described on the Brown Memorial’s website as “a man who was unfamiliar and unsympathetic with the Dakota people and their needs.” During the war, the Brown House was burned to the ground. There are two plaques at the historical site.  The older plaque, erected in 1958, reads:

These Ruins are all that remain of a large stone house built in 1861 by Joseph R. Brown, Frontier Fur Trader.  The house known as Father and Gay Castle, was a center of hospitality and happy family life for the short time that Brown, his mixed-blood Sioux wife, and their twelve children lived in it.  On August 19, 1862, during the Sioux Uprising, the Browns were forced to flee their home which was looted and burned by the attacking Indians.

The plaque doesn’t talk about how the Dakota were literally starving to death, and that is why they attacked the white settlers. It makes no mention of the broken promises made by the federal government, which Brown represented to the Dakota. 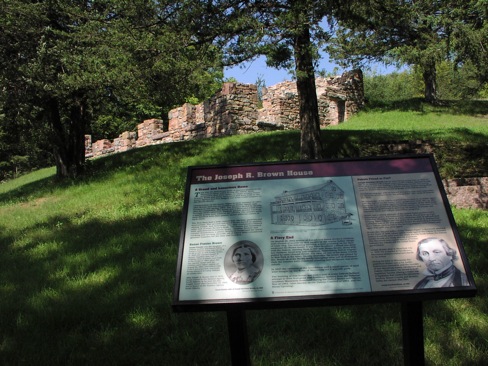 Near the Brown house is another historical site, the Schwandt Memorial Monument in Renville County along CR 15.  It remembers the Schwandt family members killed by Dakota warriors. Near the monument, which was erected in 1915, another sign, created with funding by the Federal Highway Administration and Walmart, which reads:

That same plaque, after telling the story of the Schwandt family’s murder, goes on to describe what happened to the Dakota:

After General Sibley recovered the white and mixed-blood captives at Camp Release, the Dakota were interned at Fort Snelling for the winter.  In this crowded space surrounded by a tall wooden fence, many became ill and died.

The plaque’s account of the Dakota internment at Fort Snelling doesn’t fully describe what many today call a concentration camp, where hundreds of Indian women, children and old men died that winter.

The dual – and dueling – narratives are evident in the language used to name the events of August and September 1862. Over the past half-century, their name has changed from the Sioux Massacre to the Sioux Uprising to the Dakota Conflict or Dakota War. In this series, we have chosen to call it the U.S.-Dakota War, a name that reflects the reality that two nations were involved. This series both reports  the “war” about the accuracy of historical description, about the naming of events, and about the relation of peoples and history in Minnesota in the 21st century, and reviews the historical events of 1862.