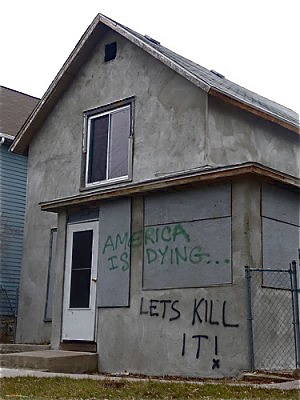 Are housing foreclosures in Minnesota on the increase in 2009? According to RealtyTrac’s latest assessment of the housing meltdown, the answer is an unequivocal yes: foreclosure filings are up an eye-popping 71 percent over last year in Minnesota. Through August, more than 25,000 properties have been involved in foreclosure proceedings.

But the Hennepin County Sheriff’s Department has an equally stark statistic to prop up the case that foreclosures are actually on the wane in the state. The number of foreclosures that the law-enforcement agency has processed is down by 30 percent so far this year. In 2008 the sheriff’s department had auctioned off 5,198 foreclosed homes through August. By contrast, through the first eight months of this year it had auctioned off just 3,669 homes.

And Hennepin County is not alone. According to statistics maintained by HousingLink and the University of Minnesota’s Center for Urban and Regional Affairs, in 2009 there were 11,089 foreclosure sales through June, the latest period for which statistics are available. That’s down from 13,795 such sales in the first six months of 2008 – a decrease of 20 percent.

So what accounts for the radical difference in the assessments? Is one set of numbers bunk?

Not necessarily. For starters, it’s a difference in methodology. The system employed by the Minnesota housing groups is quite simple (if labor intensive): each month they call the sheriff’s departments in all 87 counties and find out how many foreclosure sales were processed.

“There’s no quibbling with that number,” says Dan Hylton, HousingLink’s research manager. “It is what it is.”

But RealtyTrac uses a more complex (and probably less precise) methodology to determine how many foreclosures are occurring across the country. It tabulates five different indicators of foreclosure and then adds them all together to come up with a grand tally.

“The data provided in the report counts the total new filings, consisting of Notices of Default, Lis Pendens, Notices of Trustees’ Sales, Notices of Foreclosure Sale and Real Estate Owned for the period requested on either a monthly, quarterly or annual basis,” reads a statement on the group’s web site explaining its methodology.

Since many homes go through several of these steps on the road to foreclosure, it’s highly likely that RealtyTrac is double-, or even triple-counting some properties. However, that still doesn’t explain the huge difference in statistics purporting to track the same trend.

At least part of the disparity can likely be traced to a difference in time frame. The statistics compiled by the Minnesota housing groups only run through June, while RealtyTrac’s study measures foreclosure filings through August. There was a lull in foreclosures earlier this year owing to moratoriums imposed by some of the country’s largest lenders.

But most housing experts expect a second wave of foreclosures during the second half of the year. While the initial housing crisis was largely due to irresponsible borrowing and dodgy mortgages, this next wave will be primarily homeowners unable to keep up with payments owing to the dismal economy. RealtyTrac’s numbers are likely more fully capturing the start of that next crest.

“The consensus among housing experts is that we’re in a lull between waves and that this next wave is going to be more economically driven,” says Hylton.