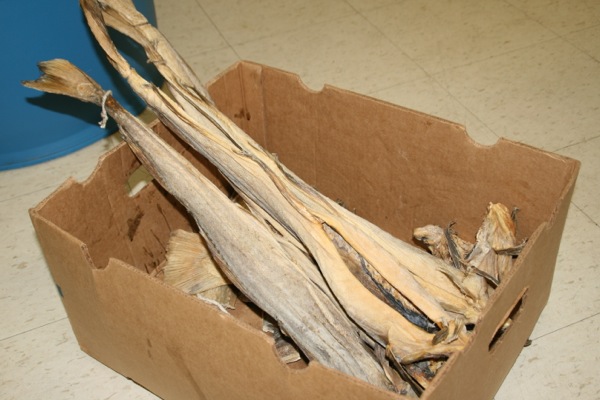 Dried fish; from Iceland to Africa to Minnesota. (All photos by Stephanie Fox)

When people think about the world’s great gastronomies, foods of Africa, or at least of West Africa, don’t often come to mind. It could be that most Americans don’t know much about this cuisine, but foodies should pay attention. In Minnesota, some West African provisions (like boxes of instant fufu, a dough-like staple made of pounded starchy vegetables) are starting to show up at some Cub or SuperValu stores. For less sought-after supplies, you need to show up at one of the many small African food stores, such as Adom African Grocery at 1224 E. 66th St. in Richfield.

West Africans tend to eat a lot of starches and boiled or fried foods. Oil plays an important part in the cuisine, and richly flavored red palm oil and palm cream are used in quantities that may not appeal to health-conscious Americans and, increasingly, health-conscious Africans. Used in moderation, they shouldn’t be a problem. Palm oil has no cholesterol and both are high in vitamins A and E.

Even Abigail Abbey, who helps run Adom and is happy to explain what to do with fermented corn flour, dried bitterleaf or Tom Brown (a corn porridge with groundnut and sorghum,) admits that the African food around her home country of Ghana is high in calories. “That doesn’t stop us from eating it,” she says. 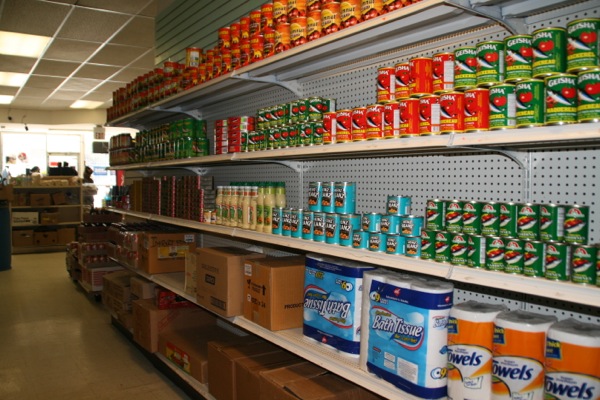 Cans of various fish, an important part of African cooking.

At Adom, shelves of various canned fish line the walls. There’s also stockfish – dried fish, hard as birch planks – their tails sticking out from a cardboard box. On a trip to Iceland, I saw such fish hanging from drying racks, swinging in unrelenting costal Icelandic wind. Caught by the descendants of Vikings, they’re shipped to Africa and then to Minnesota where both African immigrant cooks and other descendants of Vikings can use them to prepare dinner. The fish adds protein and lots of flavor. 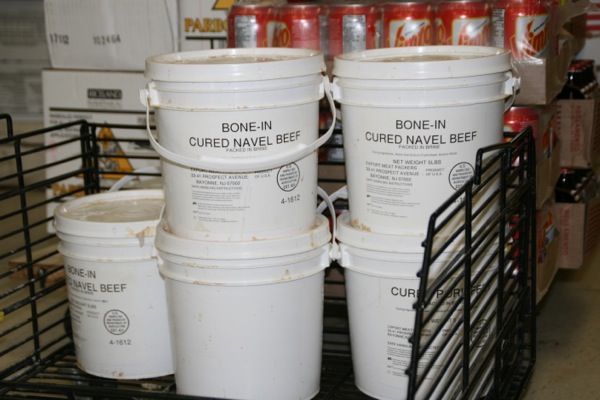 Plastic tubs of navel (or is it naval) beef – what to do with the contents remain a mystery.

If you want meat, check the freezer. Or, look for large white buckets filled with five pounds of beef, variously labeled navel beef (because it’s belly meat) or naval beef (because it’s salt beef once used to feed sailors.) There’s no consensus on which is the true story. A quick search of the Internet produced only Canadian recipes. Is this Montreal style meat? Is it salted brisket? Is it something else? Send feedback if you try it.

Only two types of bread are for sale: Solomon’s Bread and the Guyanese Plait Bread, which looks a lot like a traditional challah. To further complicate the culinary geography, the plait bread hails from Guyana, which is a South American country. 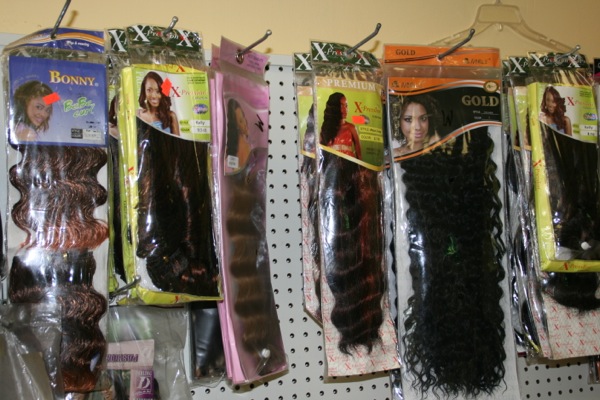 Hair extensions and traditional clothing sell along with the African food.

In addition to the groceries, Adom Grocery carries beaded necklaces, African facial creams and pairs of glitzy high-heeled shoes, size 9 ½, for sale behind the counter. 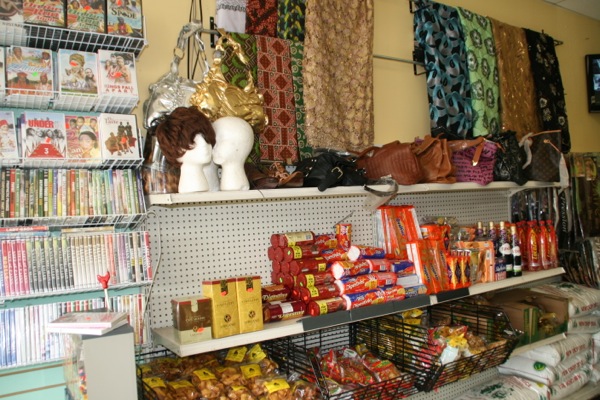 Videos and African clothing are part of the retail mix.

Toward the front are popular DVDs – look for titles like ‘Sorrows of Love’ and ‘Die wo Yeyi’ – hair extensions and traditional clothing.

Remember that the foodways of West Africa aren’t universal and while one group may have a favorite food, others won’t like it. “We don’t eat it, “ Abby says of the frozen cassava. “The other tribe eats it. They put it in their soup.”