When LaDonna Redmond couldn’t find an organic tomato within 10 minutes of her home in her Chicago neighborhood, she decided to become an urban farmer. Her urban garden led to a grass-roots movement of citywide-and then national-conversations about food justice. It is her quest to see that every citizen has a right to food. She now lives in Minneapolis and is the founder of a new organization (Campaign for Food Justice Now) to be a one-stop shop for individuals and organizations working on issues of food justice. 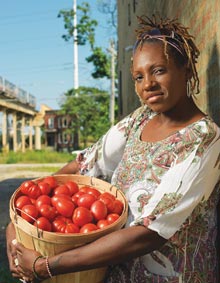 What sparked your concern about our food systems?

I became interested and concerned about food justice issues when my son developed food allergies to shellfish, dairy products and peanuts at an early age. I realized that the right kinds of food for him were not readily available to me in my neighborhood-non-GMO [genetically modified organism], foods that were fresh and free from his allergens.

At the time, I lived on the West Side of Chicago. My husband and I started urban farming in our backyard and it grew from getting vacant lots to developing urban farm sites and selling food at farmers markets. That was the beginning of my work of rebuilding local food systems, first around my neighborhood and now around the country.

What does “food awareness” mean to you?

It’s about knowing where your food comes from, knowing who grew the food, under what conditions and to what degree those products are healthy for the land.

How do you define “food justice?”

I define food justice as the activity to shift the injustice in the food and agriculture systems. Filling the gap, for example, in worker rights, making sure that the workers are treated fairly; making sure that all communities have access to healthy food; and if people want to grow food, making sure that they have access to land and materials or capital necessary to grow it. Also, to have seeds that are free from genetic engineering and land that is not contaminated by pesticides and other chemicals.

I think everyone has a right to eat. We should have a system that protects people from being hungry. But instead of just feeding hungry people, how do we get food to everyone? This would really mean pushing against corporate control of our food system.

Talk more about your work, what you’re envisioning.

The issue of food is political at a corporate level but not at the consumer level. We need consumers to be educated to know when their legislators are not supporting the right to food. When legislators are not supporting SNAP benefits [also known as food stamps] or if they are supporting genetically modified foods, we need to call people’s attention to that and help them make a decision to support candidates who support the right to food.

When you look at Wal-Mart being the largest purveyor of groceries in the United States … Why don’t we have the diversity in our food corporations that we are asking for in our food? Particularly in agriculture, we know that mono crops are not good. So mono crops and mono corporations? There should not be one corporation that is dominating any field. We need to diversify and bust corporate control of our food system.

What is the role of women in the food justice movement?

Women who have had children have an intimate relationship. We are the first food through breast feeding-being food for someone else. Often moms are the ones who do the cooking and are the protectors of the nutritional value in the home. I think that is a really important voice, underrepresented in the movement.

I call myself the “urban food goddess” and I want to capture the voices of women, politicize them about the food that is available in our communities.

You’ve talked about dreaming bigger. What does that mean to you?

Dreaming bigger means that we can have a healthy, fair and just food system all at the same time. Instead of just trying to have more organic food or give more food to hungry people, why don’t we dream of a world where we don’t have hungry people, where we don’t have poverty? We’ve compartmentalized the work on food systems-one group of people working on organic foods, other people working on closing factory farms. What we really want is a fair, just and healthy food system. For me, one of the absolutes is that we’ve got to get rid of hunger. We should not have hungry people.