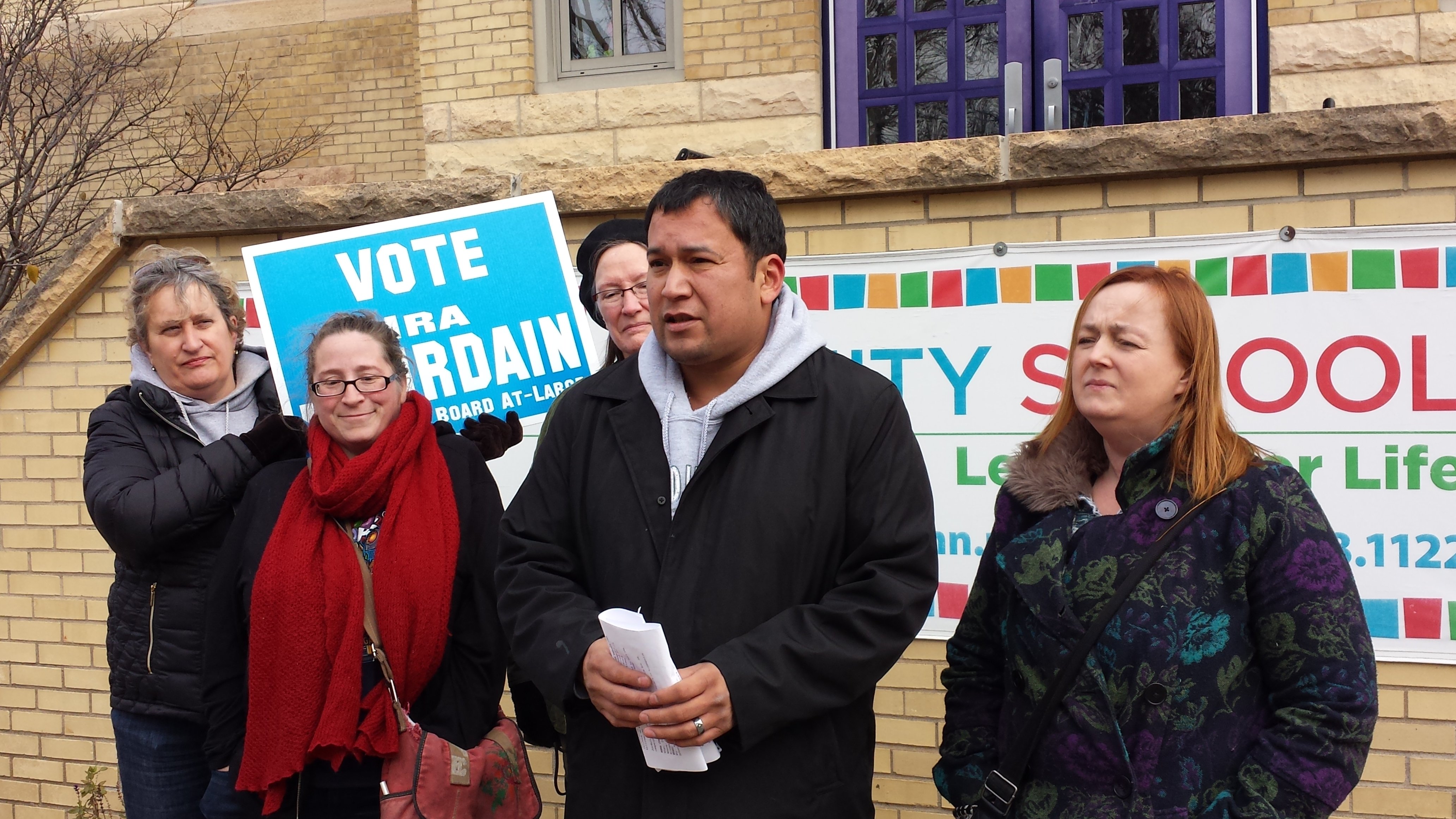 (Photo by Sarah Lahm) Minneapolis school board candidate Ira Jourdain addresses a crowd regarding dark money flowing into the local school board race.

What do John Kline, Tom Emmer, Mitt Romney, and Minneapolis school board candidates Iris Altamirano and Don Samuels have in common?

They have all received campaign donations from Minneapolis attorney Douglas Seaton, who was one of the lead attorneys working against the recent drive to unionize home-based childcare workers in Minnesota. Altamirano is a former organizer for the Service Employees Internation Union (SEIU), which helped lead the fight to organize home childcare workers.

Seaton, who has given thousands of dollars to Republican candidates and committees, according to the website opensecrets.org, also  contributed $5,000 to the 2012 Minnesota Voter ID Amendment campaign, which was defeated by voters in the 2012 election.

According to recent campaign finance reports, Seaton has given $250 donations to both Samuels and Altamirano.

Another donor to both Samuels and Altamirano is the Hubbard family. The Hubbards, who run Minnesota media company Hubbard Broadcasting, gave $2600 to each candidate in September 2014. Hubbard Broadcasting, the corporation, is a very politically active one: the company recently gave $200,000 to the Freedom Partners Action Fund, which is the Koch Brothers’ new super PAC.

Other prominent supporters of Samuels and Altamirano include former Minnesota Republican party chair Rob Eibensteiner, who gave $1,000 to Samuels, and local attorney and MinnCAN board member Mike Ciresi, who gave $1,000 to each candidate, individually, and contributed $10,000 to the recently controversial group the Minneapolis Progressive Education Fund, which has been campaigning for Samuels and Altamirano.

Benson Whitney, who is the board chair of MinnCAN and a prominent funder of Republican campaigns, also gave $1,000 to both Samuels and Altamirano.

Jourdain’s campaign also put up a new website that draws further attention to Altamirano and Samuels’ campaign finance reports. Jourdain says campaign supporters did the digging into the campaign finance information for all four at-large school board candidates, including Rebecca Gagnon, Samuels, and Altamirano, and encouraged him to go public with the details.

Gagnon’s response to these recent revelations about Samuels’ and Altamirano’s funding sources indicates that she considers it an issue: “Conversations with everyone are our job as elected officials because we represent everyone. Taking money is different and typically reflects your values and aligns with your beliefs.” Gagnon went on to say that she is proud of her “broad base of support” because it comes from those who “know and love” what she stands for.

Neither Samuels and Altamirano responded to requests for comments regarding their funding sources, both have gone on record saying they have enjoyed broad support for their campaigns. On KFAI radio’s Truth to Tell program, recorded Oct. 27, Altamirano said that the amount of money in the race this year is “shocking,” but that she is “very proud” of what she says is broad support for her campaign. On KFAI, Altamirano describes her support from unions, the DFL, through the endorsement she shares with Gagnon, and “outside” money, and makes the point that having such varied funding sources is part of our “political reality.”

Samuels, in this KSTP news report, states that he has “never taken a penny” from the Minneapolis Progressive Education Fund, and says he is running a locally-funded campaign.

Minneapolis residents will vote for two at-large school board candidates on Nov. 4, 2014.