Ready Htoo's family fled Burma when he was only 4 years old. (Photos by Grace Pastoor)

When Ready Htoo tried his first hot dog in America he loved it – until he found out what it was called.

Ready and his family came to America in 2003 after spending five years in refugee camps. Born in Burma, he said his family fled their home country because the government is trying to drive his ethnic group – the Karen – out of the country.

The Karen are the third-largest ethnic group in Burma, according to the CIA World Factbook. The country in Southeast Asia is located between India, to the west, and Thailand, Laos and China to the east. It is also known as Myanmar.

Only four when his family left Burma, Ready relies on his parents’ re-telling of their move.

“My parents said that the Burmese people attacked our village,” he said. “They destroyed any village that opposed them.”

Ready’s father, Nay Htoo, said the Burmese government is a military dictatorship that tries to drive the Karen out of the country. Soldiers attacked the Htoo’s village, Ready’s father said, because it was in control of the Karen National Union, a group representing the Karen people and fighting for democracy in Burma. The military regime in Burma is socialist.

After the Htoos left their village, they lived in refugee camps in Thailand.

Ready’s father said his family wanted to come to the United States so his children could get a good education. Ready “had no time (to get good schooling) when we lived in Bangkok, (Thailand). We just lived in places for a moment,” his father said.

Left: Ready hangs out with other Karen kids at First Baptist Church in downtown St. Paul. The church is a cultural center for the Karen community, which has been growing. There are an estimated 5,500 to 6,000 Karen living in Minnesota now, according to estimates by the Karen Organization of Minnesota.

The Htoos decided to come to Minnesota because of the growing population of Karen immigrants already here. “We had friends that live here,” Ready said. “They called us so we came and picked that state.”

Saw Morrison, a program manager for the Karen Organization of Minnesota, said: “Minnesota has the largest Karen population around the country. It is a nice place to be. The government understands the refugees’ lives better than in other states.”

Morrison said one reason Minnesota is popular with Karen immigrants is because other immigrant groups, like the Hmong, had already set up organizations to help new refugees.

“The other refugees already set up things like human services and businesses and schools,” he said.

One place where the Karen people have found a lot of support is at churches. There are four churches in the Twin Cities with large Karen congregations, and one of them is the Htoo’s church, First Baptist Church in downtown St. Paul, which has the largest Karen congregation.

Ready said he and his family have been going to the church since they came to Minnesota.

First Baptist is a cultural hub of the Karen community, offering worship services entirely in the Karen language. The atmosphere is festive and casual with children running up and down the aisles. During the service, a live band plays hymns in Karen and people clap for the baptized. Morrison said the church also helps children adjust to life in America.

Ready volunteers at his church: he sings in the Karen choir, teaches Sunday school and babysits younger children during the church service.

“The church is great,” Ready said before services one Sunday in September. “It’s a second home. They welcome everybody here.”

The problem with English

Ready said the hardest part of adapting to the United States was learning English.

“English was pretty difficult for me,” he said. “There were new words every year and there were a lot of vocabulary words that I did not understand. It was really hard.”

Ready also said he experienced some bullying because of the language barrier between him and his classmates.

But now that Ready has overcome the hurdle of learning English, he said he feels at home in America. He fits in well and has friends of all races.

“They’re American kids and Asian kids and I just speak in English with them and I feel pretty comfortable,” Ready said.

Ready is a senior at Roseville Area High School. His older sister, Zinzin Htoo, said Ready has taken well to America and usually does well in school.

“Sometimes he gets lazy with doing homework and stuff but most of the time I think he’s doing good,” she said.

Breaking down the barrier 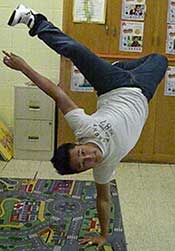 Ready has embraced American culture and music. He said he loves to break dance and listen to all kinds of music, including hip-hop and R&B. He also likes to make his own music.

“I like singing,” he said. “And I’m trying to learn guitar so I’ve been practicing guitars.”

Ready is doing well, but he does wish the Karen people could have a better life in Burma. He said he would never move back, but that the situation still needs to change.

“I think someone should free the people there,” he said. “But it’s pretty hard to step up there because the soldiers are very violent and if you stand up to them they will kill you.”