Aisli and Vaccaro performed with Titirimundi on August 19 at the Black Dog Coffee and Wine Bar in Saint Paul’s Lowertown. Over two sets, the groups performed about three hours of flamenco music.

From Albany, New York, Asili and Vaccaro is vocalist Taina Asili and guitarist Gaetano Vaccaro. Titrimundi is based in Minneapolis, and consists of dancer April Goltz, percussionist Edwin Scherr, and guitarist/percussionist Trevor May. A guest dancer who declined to give her name or appear in photos also performed with the two groups.

Though the words were in Spanish, Asili’s rich voice filled them with enough emotion to stir anyone who listened. She traded the lead with the dancers who created rhythms with clacks from the heels and toes of their feet, stepping and twirling in front of the musicians. When they did take solos, the dancers led the others with the tempo their feet set. Following them, the guitarists plucked and strummed their instruments with their fingers and the percussionist tapped a beat with his hands on a cajón, a box-shaped wooden drum.

About 50 people packed into the Black Dog for the performance, and I spoke with two of them. Sharon Pfeifer said that she enjoyed all the performers and especially liked the venue because it has a family atmosphere where you can enjoy a glass of wine. Elmira Lilic went to the show because she wanted to experience something new. She was not disappointed, she said, and loved the combination of the music with the dancers’ movements. “This adds some spice to Minnesota,” she remarked, “we need more of it.” 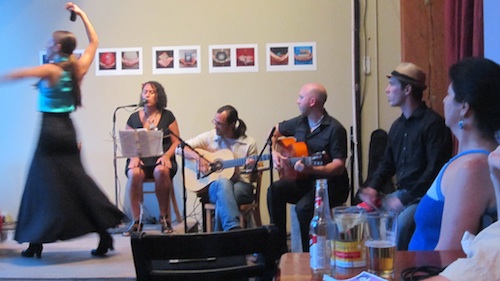 Asisli said flamenco is a folkloric art form that came together in the Andalusia region of Spain. As she explained, it was created by Roma people in Spain, called gitanos in that country, who combined North African, Afro-Caribbean, and Spanish folkloric musical influences. When asked to compare flamenco to other musical styles, she replied “There’s nothing else like it in the world.” Goltz explained that flamenco artists seldom create new songs, but rather perform the same letras, or verses, that have been used for centuries. “It’s not about doing something new,” she said, “it’s about interpreting it in a new way.” Exemplifying that spirit, they performed one letra as a fusion of hip-hop and flamenco.

According to Asili, Seville, Spain is the center of flamenco in the world, but it is popular in many other areas, including Japan, Germany, Argentina, and the United States. 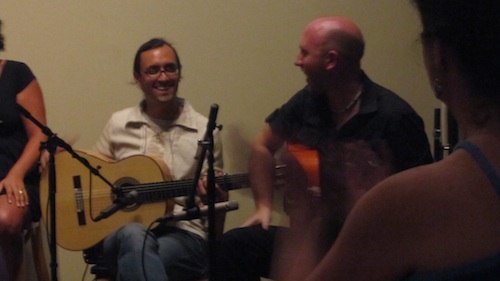 This the second year that Asili and Vaccaro and Titirimundi played together, but it was only the latest instance in a long musical friendship. Taina and Goltz started playing music together when they were in a punk band called Antiproduct. That band eventually broke up, but both women continued to study and perform music.

In 2008, Goltz formed Titirimundi in Minneapolis with guitarist Aaron Maus. Then, in the winter of 2010, Taina went to Spain and met Maus was there to study flamenco. Taina said that he helped her and Vaccaro discover and study flamenco in Spain. In Spain, Taina said, they all decided to bring it together. So Asili and Vaccaro decided to come to Minneapolis that summer to play some shows with Titirimundi. “It’s really a treat to play this kind of music with someone so integral to my family,” said Goltz.