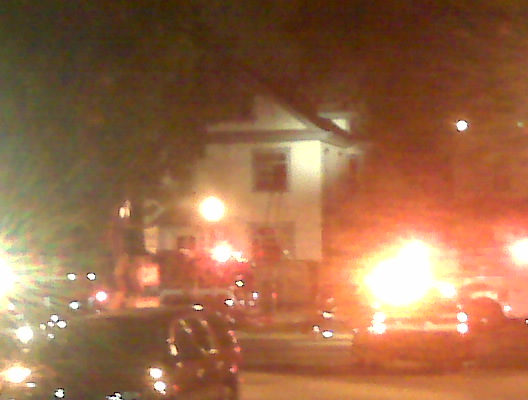 The house once belonging to one of Minnesota’s most important female historical figures, Pauline Fjelde, burned last night, and some neighbors are pointing fingers at the building’s owners, James and Kristen Schoffman, who they say neglected the building by leaving it unsecure. The house has been at the center of a dispute over the last year between the Schoffmans, who bought the building in order to turn it into a parking lot, and historical preservation advocates who believe that the property should be saved for its historical significance.

Pauline Fjelde lived in 3009 Park Avenue from 1908 to 1918. Fjelde was a noted textile artist and painter whose work was displayed around the United States and Europe and who is perhaps best known for the first Minnesota State flag which she sewed with her sister, Thomane. The home was designed in 1907 by architects Boehme and Cordella who also designed-among other notable structures-the Swan J. Turnblad Mansion (current home of the American Swedish Institute) at 2600 Park Avenue, just four blocks north of the Fjelde home.

In January, the Heritage Preservation Commission denied James Schoffman’s petition to raze the building to create a parking lot.  The commission established interim protection for the house, and noted that the Schoffman failed to “prove demolition was necessary to correct an unsafe condition or that no reasonable alternative existed,” according to a press release put out by the Minneapolis Historic Homeowners Association (MHHA).

Connie Nompelis, a realtor and advocate for preserving the house, said she received a call from Council Member Elizabeth Glidden around nine o’clock in the evening Tuesday,saying that the house was on fire, and Nompelis rushed over.  Neighbors in the area began calling each other around that time, and nearly 100 people gathered across the street from the house as the fire department worked on putting out the fire.

Brian Finstad, who  lives two blocks away from the Fjelde house, said that he has emailed the city regarding the continually insecure status of the building.  Twice this summer, the city has come to board the property, and both times Schoffman unboarded the building, Finstad said.

A licensed broker, who also lives in the area, said that in the past few months she has been showing the house to prospective buyers, and all three times the door was unlocked.

“The first time I went to get the key from the lock box, and the door was wide open,” said the broker, who asked that her name not be used.  She called the police, and wrote a note to Schoffman on Showing Solutions, a listing service for real estate agents, recommending that he lock the windows, remove the beer bottles and broken furniture, and clean up where a living room had been used as a toilet.  When she went back a few weeks later, the building was still unlocked, the broker said, and the third time she visited the property this summer, it was still unlocked, and none of her recommendations had been followed.