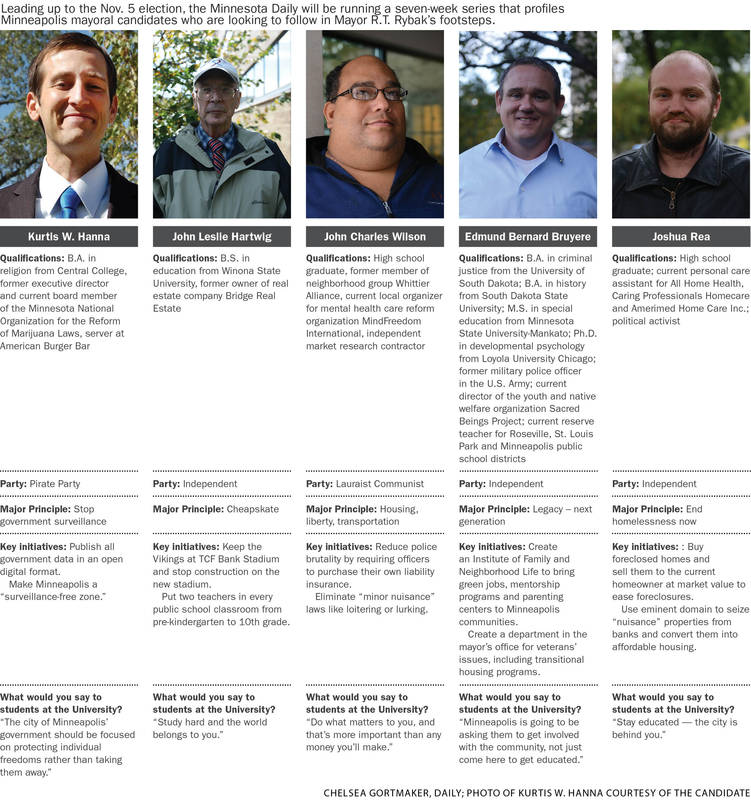 When polls open in Minneapolis on Nov. 5, 35 mayoral candidates will be on the ballot, focusing on issues ranging from the Vikings Stadium to government reform.

Minnesota Daily Editor’s Note: Leading up to the Nov. 5 election, the Minnesota Daily will be running a seven-week series that profiles Minneapolis mayoral candidates who are looking to follow in Mayor R.T. Rybak’s footsteps.

Kurtis Hanna, John Hartwig, John Wilson, Edmund Bruyere and Joshua Rea are five of those candidates, and they hope to reform the city’s police department and close the achievement gap if elected.

Hanna said he’s disappointed with the city’s Police Conduct Review Panel, a board that reviews cases of alleged police misconduct. He said if he’s elected, he’ll start a new organization completely separate from the police department to investigate and report on police misconduct.

“There currently is not any sort of effective oversight,” he said.

Bruyere said he would like to evaluate the city’s police system because a few years ago, he was pulled over by a Minneapolis police officer, arrested and then hit five times by the officer. He said the incident is an example of unacceptable police conduct.

But Bruyere, a former military police veteran with a degree in criminal justice, said he isn’t dwelling on the experience and understands police officers are often working in stressful situations.

“There’s more good going on with the police department than there is bad,” he said.

Wilson and Rea both said they want to increase police accountability by making each officer purchase his or her own liability insurance instead of being covered by the department.

This way, he said, incidents of police misconduct would have more personal consequences for officers.

Wilson said he admires the San Francisco police review system because it focuses heavily on civilian input. He said he would set up the Minneapolis system to resemble it.

Hartwig said he’s concerned that the police department will be further alienated from the community if city officials continue to “go after” officers over incidents of police misconduct.

“Let the police do the job they were trained for,” he said, noting that he’s confident in the current civilian review panel.

Though Hartwig is confident in the Minneapolis police department, he said he would make larger changes in the city’s school system.

He said he’d put two teachers in every classroom from pre-kindergarten to 10th grade to increase the ratio of teachers to students and ensure a more “personalized” education.

“If we lose [students] by third grade, we’ve probably lost them for life,” he said.

Rea and Bruyere said if elected mayor, they would meet with teachers, families and school board members to help improve the education system.

Bruyere, who currently works as a substitute teacher, said the mayor should have the power to appoint school board members.

The UNICEF Convention on the Rights of the Child, which advocates for human rights, social welfare and education, is the foundation for his policies, he said.

Hanna said the city’s achievement gap is one result of the “broken,” racially discriminatory police system.

He cited a recent American Civil Liberties Union report that said in 2010, black people in Minnesota were about eight times more likely than white people to be arrested for marijuana possession, even though the two groups’ usage rates were about the same.

He said that disparity ultimately perpetuates the achievement gap, so he plans to close the gap by decriminalizing the possession of any amount of marijuana below 1.5 ounces.