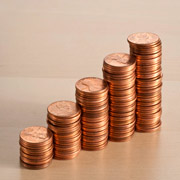 In recent comments, Governor Dayton has reiterated his commitment to making Minnesota’s tax system more modern, sustainable, and fair. Reform of the state’s sales tax will be critical to achieving these goals. While the Governor’s full tax reform will not be released to the public until later this month, it is possible to get at least a partial picture of what sales tax reform will look like based upon Dayton’s public comments.

This is the first in a series on restoring Minnesota’s fiscal fairness.

For several months, Revenue Commissioner Myron Frans has been presenting Governor Dayton’s case regarding the need for tax reform. The icon of the Revenue Department’s tax reform presentation is the “three legged stool.” Each leg of the stool represents one of Minnesota’s three major taxes: income, property, and sales. Based on the analogy, ideally the three legs of the stool should be approximately equal length, signifying that the state is equally dependent on each of the three major taxes. A decade ago, this was the case.

But not today. Over the last decade, some legs of the stool grew longer (specifically property taxes), signifying increased dependence on these tax types, while others shrunk. The shortest leg of Minnesota’s tax stool is the sales tax, comprising just 26.7% of combined property, income, and sales tax revenue in 2012—down from 32.3% a decade earlier.

The decline in Minnesota sales tax revenue—both in constant dollars and relative to the other two major taxes—is due in large part to the narrow base against which the tax is levied. The sales tax in Minnesota is applied almost exclusively to goods (with exemptions for food, clothing, and many other items). Almost all services are exempt. As illustrated below, goods as a percentage of all consumer purchases has declined significantly, while percentage comprised of services has increased. 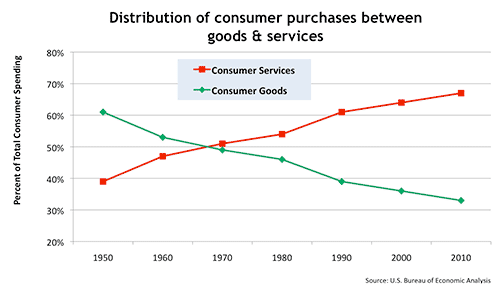 Minnesota’s sales tax base is currently among the narrowest in the nation. Economists generally favor broad tax bases with few exclusions. Minnesota could broaden its sales tax base to include many types of services that are now exempt, thereby adding stability to the sales tax base and contributing to more robust revenue growth in the future.

As noted above, some categories of goods are also exempt from the sales tax. In addition to selected services, Governor Dayton may propose expanding the sales tax base to include digital products and telecommunications equipment and possibly even publications and advertising materials—all of which are currently exempt. Another possibility would be to expand the sales tax to include items of clothing above a specified value.* Finally, it is likely that the Governor will include several sales tax items first proposed in his 2011 budget: including the taxation of direct satellite services, remote access software, and goods sold over the internet through Minnesota-based affiliates; these items are described in the Governor’s 2011 state tax proposal.

The Governor’s sales tax proposal may also recommend a direct upfront sales tax exemption for capital purchases. Currently, businesses must pay the sales tax on purchases of capital equipment, which is later refunded to the business provided that a refund application is filed. Providing a straight upfront exemption and eliminating the refund will satisfy a request that the business community has been making for years while also reducing paperwork and simplifying the tax system.‡

Because the sales tax is regressive, an increase in sales tax revenue—even one accompanied by a rate reduction—will contribute to increased tax regressivity. However, this can be overcome through a combination of reductions in regressive property taxes and increases in progressive income taxes. Given Governor Dayton’s commitment to fair taxation, it is a certainty that the complete tax plan he proposes to the legislature will reduce the overall regressivity of Minnesota’s state and local tax system.

After ten years of tax policy predicated on accounting gimmicks, one-time fixes, and an intense anti-government mentality, Minnesota is now potentially on the eve of tax reform that will make our tax system more modern, less regressive, and capable of generating the revenue needed to end the ongoing cycle of budget deficits. Dayton’s plan to reform the sales tax will be a key part of this new modernized and sustainable Minnesota budget.

*Taxing only those items of clothing in excess of a specific value (e.g., $100 or $200) would help to reduce the regressivity of a tax on clothing by applying the tax only to more expensive clothing items that are more likely to be purchased by high income households.

†The 6.875% state sales tax rate includes the general 6.5% rate which goes to the state general fund and the 0.375% “legacy” rate which is dedicated to natural resource and art funds. The language of the 2008 “legacy amendment” which authorized the 0.375% rate allows the rate to be reduced in the case of sales tax base expansion, provided that the reduced rate generates the same amount of revenue. Under a sales tax base expansion scenario such as that described above, the legacy sales tax rate could be reduced from 0.375% to about 0.245% and still generate about the same amount of revenue, while the general state general tax rate could be reduced from 6.5% to about 5.63%.

‡Because the capital equipment sales tax provides temporary revenue to the state (during the period between the time the tax is paid and the refund is executed), converting from a refund to an upfront exemption will have an FY 2014-15 cost to the state of approximately $170 million; this cost will drop sharply in the subsequent biennium (FY 2016-17).