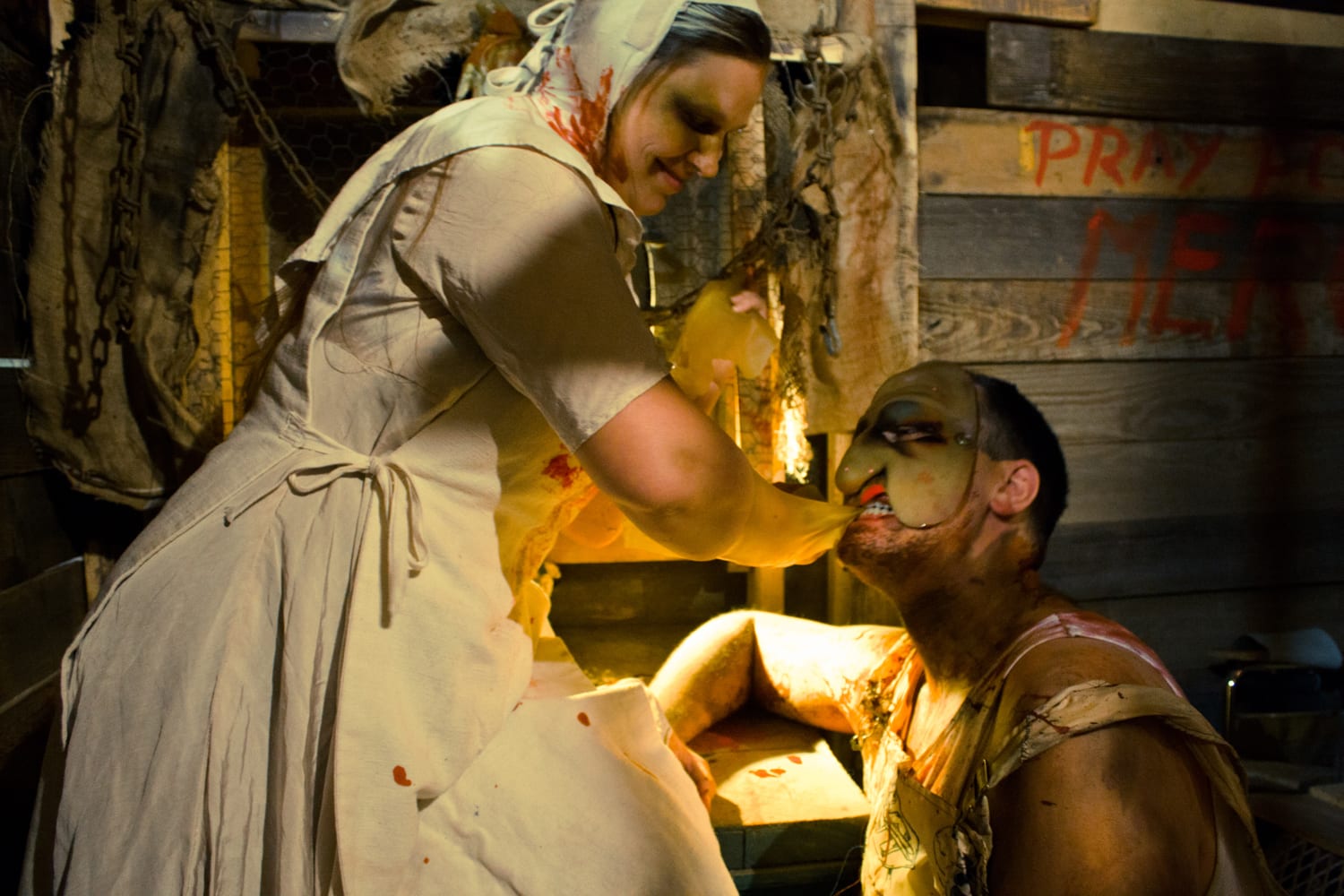 I don’t watch scary movies—besides the occasional, “Guys, lets watch Jack Frost 2!” when I’ve had a little too much to drink. And then my neighbor texts me at 3 a.m. asking why he hears, “I’ve been wearing this vial of antifreeze around my neck for a year, Jack” coming from my door as he walks by.

I saw The Ring during my first year of college when I went to Madison for Halloween with my roommate. When we got back to Macalester I wouldn’t walk down the hall to the bathroom alone at night; I made her accompany me. She then somehow convinced me to see the original Japanese version, Ringu, and I could barely sleep alone. When I saw The Grudge only because I like Sarah Michelle Gellar (from my Buffy the Vampire Slayer love), I ended up covering my face with a coat and plugging my ears. Since then it’s been very rare that I’ll see anything even remotely scary. The Soap Factory’s Haunted Basement has always been out of the question…

Until last weekend. I met up with a fellow in town from Florida to go on the #30daysofbiking closing festivities ride, and after taking way too many pictures as a group and biking all over the place, we went to Honey to get our dances on. Sometime during the ride, Florida Dude announced that he had two tickets to opening night of the Haunted Basement at the Soap Factory. I’d already mentioned that I’m a wimp and don’t do scary so he said that he didn’t mind missing it. After one of the dudes on the ride decided we all needed to drink the “Lady’s Lady” at Honey, Mr. Florida asked if I wanted to head over to the basement for our 11:36 p.m. time slot. It may have been the sugar-flavored girly drink on an empty stomach or the fact that I was feeling adventurous, but somehow I ended up saying I’d go. We biked over and when we arrived at a completely empty Soap Factory, he realized it was actually opening the next night. After getting myself so worked up because I was scared out of my mind, I had adrenalin to spare. I think it could be likened to blue balls. Scare balls? Forget I said that. We went back to Honey for more dancing and then followed that with a gluten-free pizza from Pizza Luce. This was my first of two in two days. (Note: It’s good! This gluten-free diet may just become a weekly Pizza Luce diet.)

The next night I almost got out of having to get my face scared off because Guy From Florida fell asleep accidentally around 10 p.m. and almost didn’t get up for the Basement. I had some strange desire to go since I’d talked myself into it the night before and still felt slightly brave. So we went.

As soon as we walked in I started asking the staff how scary it was, hoping for at least one person to say it wasn’t bad. The woman who had us sign the waiver saying we wouldn’t punch the scary actors told me she’d been through earlier that night and had thrown up afterwards. I asked whether it was from fear or if it was gross down there, and she said something like “some of both.” I learned she was one of a few who’d thrown up that night.

I hid my face in a red knit hood and managed to move my little red riding hood self along the way towards the stairs down to what I assumed was the scariest place in the world. At the refreshment counter I asked the two gals how scary it was and one told me she never goes through it. I started to really worry and asked her to go through with me. She wouldn’t. We met our companions who’d be going with us (it’s four people at a time) and I prepared them for the fact that I would maybe be jumping into the arms of anyone close. Florida Dude was pretty convinced I was going to pee myself from fright, so he made me go before we got in line. I made sure everyone was prepared for the possibility that I’d pee and cry and vomit all at the same time. The lady at the stairs also said she never goes through the haunted basement and she told me ten people had already cried uncle that night.

I took a deep breath, latched onto Mr. Florida, and walked down the stairs. I was so incredibly afraid of being afraid that I think I rushed us through the first half of the basement, yelling, “we have to catch up with our friends!” A group of four is safer than a group of two, right? I tried not to look too closely at anyone at first, hiding my face a little in my hood, figuring it’d be less scary that way. I did a rather great job of convincing myself with the “it’s just actors in costumes thing” and started to be able to look at everything, managed to only scream a few times, and did not pee, cry, or vomit. Actually, what I did most was laugh. I was mostly worried that it would get super scary but it never happened. Somehow, I made it through without feeling like a huge wimp or worrying that I would need to be escorted to the bathroom and everywhere else for weeks.

We talked about it with some folks later and I was told that they lost one of the lead designers so the whole thing was a bit different this year and—as some folks said—less scary. [Read Heidi Schatz’s review in the Daily Planet.] I think it was the first year where they allowed actors to touch people, and I thought maybe they relied too much on that. I felt like it was more touching than scaring—and I’m totally cool with touching; someone grabbing at my legs is just someone grabbing at my legs. When I got to the end I was surprised it was over because I didn’t think I’d make it all the way through without some real terror.

Florida Guy asked if I thought I’d go again and I said probably not, unless maybe someone presented me with a ticket again like he’d done, but it was nothing I’d seek out. I may have changed my mind though. Knowing that I made it through once encourages me to try it again and see how it changes in terms of layout, themes, and scare-level. Since I made it through with dry pants this time, I won’t have to worry that I’ll wimp out and embarrass myself (I don’t like to give up!) by crying uncle—and then if I do wimp out, who cares?

I encourage everyone to go, because not only does it support the Soap Factory, but if you’ve been before you can figure out if it’s less scary than previous years, or if I’m just totally brave and awesome. So go get scared—and let me know if you throw up!