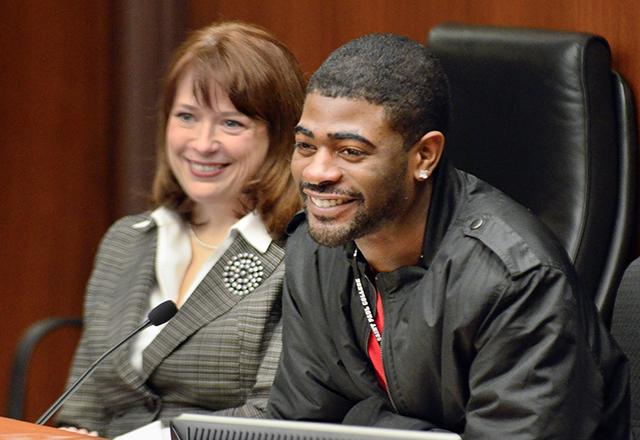 Jeremiah Carter testifying before the House Health and Human Services Finance Committee on March 20 in support of a bill sponsored by Rep. Laurie Halverson, left, that would provide funding for Homeless Youth Act activities. (Minnesota Legislature photo by Andrew VonBank)

The first Twin Cities suburban homeless shelter for youth is moving forward in Brooklyn Park faster than anyone expected, thanks to a coalition of church and community leaders and support from city leaders.

Organizers say it could be ready by the end of the year, and will house 10 to 12 young people, ages 16-21, who need a place to stay and help with job training, school, medical care and other services.

“There has been an astonishing response from the churches and the community,” said the Rev. Rachel Morey of the Mosaic congregation of Brooklyn United Methodist Church. “I’d be lying if I said I thought it would come together this quickly.”

The current plan is to build a new facility on city-owned land; it would be operated by Avenues for Homeless Youth, a nonprofit that runs a similar shelter in North Minneapolis.

Although the problem of homeless young people in the suburbs can run under the radar for most folks, those who work directly with youth — school counselors, police officers, social workers and ministers — know that it happens everywhere, not just in the core cities.

Morey said it was the biggest issue she heard about when talking with people in the community as she formed her congregation.

Couch-hopping, sleeping in cars or under bridges or staying all night in playgrounds all happen more than most people realize, she said. And without a safe, supportive base, young people are far less likely to finish high school and move into productive work.

A 22-year-old formerly homeless woman named La’Tecia spoke with me last week, at the behest of Avenues leaders, and said that a safe haven turned her life around.

She knows homeless youth in Brooklyn Park and the northwest suburbs who would benefit from a shelter closer to home.

“Everybody’s got their own story, but it’s hard for someone without transportation to get to Minneapolis, where they can get help,” she said. She said she left home with nowhere to stay four years ago, and wound up crying on the floor at the Dorothy Day Center in St. Paul. A social worker saw her, and helped get her into a safe house, and eventually into the Avenues program, where she earned her GED.

Now, she has her own transitional apartment and is working at a temp job that she hopes will become permanent.

The first meetings on this suburban safe haven came less than a year ago and they’ve moved at a rapid pace. Brooklyn Park Mayor Jeff Lunde and the City Council embraced the idea, and voted recently to use $800,000 for a safe-haven building.

Planners say they looked for a site close to public transportation, but not in too conspicuous a location; young people in crisis need a discrete location to stay.

Services will be provided on site, or in the nearby community, so that the young people won’t have to travel to Minneapolis, where there are more resources, including YouthLink, a nonprofit that helped more than 2,200 youths ages 16 to 23 in 2013.

Deb Loon, executive director of Avenues, says the new Brooklyn Park shelter will be slightly smaller than the organization’s North Minneapolis location, which has 20 program beds and one emergency bed.

The Brooklyn Park safe haven will have 10 program beds (for youth who will live there while they work to reunite with their families or learn to become independent) and two emergency beds (for those needing a short-term place to sleep, maybe someone the police might find after curfew). There will be 24-hour-a-day supervision and a full range of community based services.

Meals and basic needs will be provided, and the young people will get help for their immediate problems and so they can start to focus on the future.

Organizers of the new shelter say they’ll work closely with the local high schools and the nearby North Hennepin Community College and other educational programs.

“If they want to go to college, we’ll work to help them make that happen,” Loon said.

More immigrants to be served

Operating in a suburban location may require some tweaks, “but we’re not sure yet, what they will be,” Loon said. “The model will be adjusted based on the needs and challenges we find. We do anticipate a higher proportion will be immigrant youth, so we’ll work to be culturally responsive,” Loon said.

There are some small drop-in resource centers for youths in the Twin Cities suburbs, Loon said, and some scattered site apartments. But until now, there are no programs that take someone in when they’re first homeless and in crisis, and help them move on to independent living or reunification with their families.

“Awareness that there are homeless youth in the suburbs is a relatively recent phenomenon,” Loon said. “People now see it’s a statewide problem, and the suburban communities are starting to realize that they’re losing young people because they don’t have opportunities.”

The Legislature, too, is looking into the issue. Recently, Jeremiah Carter testified at a state Senate Finance Committee about how he turned his life around after connecting with Avenues in Minneapolis. He obtained his GED and started college, thanks to the homeless youth program, he told legislators, who are considering a bill to provide $4 million for a grant program to help emergency shelters, drop-in services and other youth homeless services across the state.

Capitalize on the energy

And how did the Brooklyn Park proposal, once suggested, move along at such a fast clip?

“No one wanted a long, drawn out process,” Morey said. “We wanted to capitalize on the energy people were bringing to the process and people were ready to move. The churches were clamoring and doing their part.

“This was one of those magical moments when calling, gifting and timing all worked out.”

And, so far, there’s been no negative reaction from residents.

“To date, we’ve seen no opposition,” Morey said. “That’s as gratifying as it is astonishing. No one is saying: ‘Not in my backyard.’ All we’ve seen is two rounds of applause for the unanimous votes [at the City Council.]”

Organizers are now raising money to operate the shelter, a cost estimated at $600,000 annually. Half, they hope, will come from government sources. The cities of Brooklyn Park, Brooklyn Center and New Hope have already chipped in some federal grant money and there’s a state grant.

They’re working to raise $150,000 in donations from churches, civic groups and individuals. Foundations will be asked for the rest, and the Bremer Foundation has offered a $75,000 matching grant.

All involved expect it to be a successful endeavor, and say it can serve as a model for other suburban and rural communities.