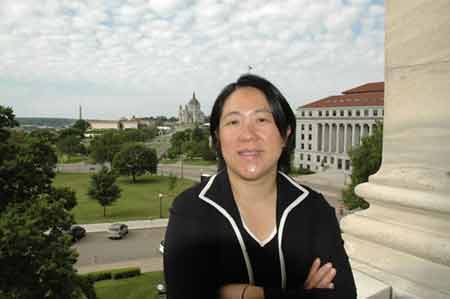 As the first Hmong-American to be elected into state office, Sen. Mee Moua’s impact goes far beyond the borders of St. Paul’s East Side, the district that she represents. Whether it is to give a speech in Wisconsin or to mediate treaty issues in the Native American community, Sen. Moua’s status as the only minority woman in the State Senate has gained her the distinction as being the “champion of the under-represented.”

Recognized by her colleagues as being a star senator on the rise, Sen. Moua is very active within the legislature. Besides being a Majority Whip, Sen. Moua sits on three very powerful committees including Health and Family, Taxes, and the Transportation committee where she currently acts as the vice-chair.

During the last few months of her first full term, Sen. Moua faces the unenviable task of fighting for her seat in this November’s elections. Hmong Today was fortunate to spend a few moments with Sen. Moua to reflect on the last four years and to get a glimpse into her future. The following is a truncated transcript of the conversation:

How would you describe your first term?
It’s not very simple to describe in so many words. I do have to say it has been very productive on a number of fronts: From a policy perspective, I feel I’ve been effective in helping to make public policy decisions that have achieved my policy priorities when I ran four years ago. Those priorities were economic development opportunities, housing, increased spending in education and public safety.

And if you look at those four areas, in terms of housing, I’ve been an outspoken advocate and champion in the Tax Committee to increase opportunities in affordable housing in the state of Minnesota.

And in terms of education, I’ve worked very hard in working with my colleagues that we increase funding to early childhood education and K-12 education, which led to one of the highest per-pupil increases in a long time in the state of Minnesota.

Also, I chief-authored the initiative to get money into the Trio Program, an enhancement program to help disadvantaged students get to college.

In addition to the policy initiatives, I also feel I’ve been a strong voice for the immigrant and diverse communities in the state of Minnesota. I am very proud to have been given the opportunity to be an advocate for the American Indian community during all the debates about the casinos. I’m very proud to have been a champion of the immigrants this last legislature session when the governor and the Republicans chose to pick on immigration and immigrant families.

So looking back, I am very proud that I have been very productive over the last four years.

Speaking of immigration issues, what was your stance on the debate that took place last session?
In the face of escalating anti-immigration, almost racist policy proposals, I stood against proposed laws, for instance, that would have forced St. Paul School students to pledge their allegiance to America, despite their religious backgrounds. There was also a proposed law that would have eliminated interpretive services in this state. Or the attempt to take away second-language testing opportunities for things like driver’s license test. Those proposals are signals that we have some real issues, and that as a state we are not quite ready to acknowledge the fact that the Minnesota of today is very similar to the Minnesota that existed 50 – 60 years ago, in that we are a state of immigrants. The big difference now is that the immigrants today are not from Europe, but come from Africa, Asia and South America.

Of course, illegal immigration is bad because these undocumented immigrants can easily be exploited by employers and others who want to take advantage of them. We need to work with the federal government to give those deserving undocumented aliens amnesty and in turn develop job training, education and such programs that will help them survive in America.

What is your response to those in the Hmong community who criticize you because you haven’t done enough for the Hmong community. Or because you didn’t show up for their event, that you don’t care about Hmong causes?
I love my job, especially working with a wide range of different communities throughout the state. In saying that, the job of being a senator is like being a problem solver. And with all the problems that are out there, I am constantly working with people. I am a senator 24 hour a day, seven days a week.

For example, right now, I am booked all the way to October. I meet with people at 7:30 in the morning and my day seemingly never ends. I have to prioritize where I can best make my presence, rather than sitting through two-hour meetings to nod my head here and there, it might be just as effective if I can send a letter acknowledging my support.

In the Senate, there are many examples of work that I have done that benefits the Hmong directly, but because I can’t simply keep writing bills that have the word Hmong in it, people don’t recognize it actually affects them as well.

Do you think you deserve to be re-elected and if so, what will your priorities be for your next term?
The last four years has been baptism by fire, but I have learned a lot and have established many good relationships. I hope I’m not sounding boastful, but I am very good at this job. I’m a good senator.

The next four years I hope to concentrate on four main topics:
1) Taxes. I want to bring property taxes in St. Paul down because currently we are taxed way too high;
2) Health care. I want to work on expanding affordable healthcare to working adults. There are simply too many working people right now who do not have health coverage;
3) Education. Reinvesting in education is key to the future of this state;
4) Mass transit system. Can you believe that there is a 10 to 15 year waiting list for repairs? With all the delays that people face in traffic, millions of dollars are being lost every day, and I think we can do something about that.