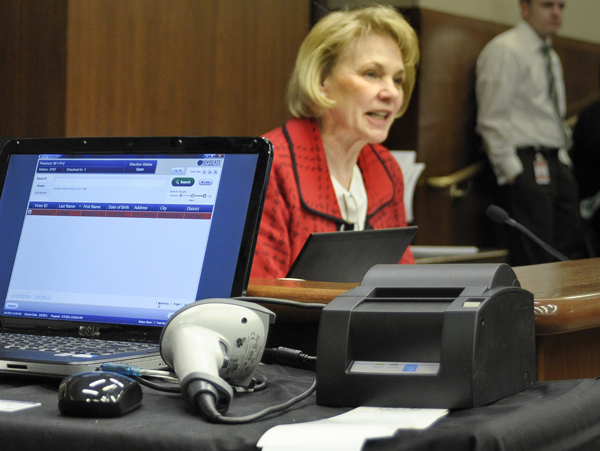 Minnesotans need to have photo identification: to drive a car, order a drink, buy cigarettes or write a check.

But should we need a photo ID in order to vote?

Those who would answer “yes” are making headway in the Legislature.

Twice in one week, members of a House committee voted to require all Minnesotans to present a valid, government-issued photo ID before voting.

On Feb. 8, the House Government Operations and Elections Committee approved HF210, sponsored by Rep. Mary Kiffmeyer (R-Big Lake). The next day, it approved HF89, sponsored by Rep. Mike Benson (R-Rochester). Both would establish a photo ID requirement and provide a way for voters with the proper documentation to obtain an ID card free of charge.

The votes marked the first time since 2006 that a photo ID measure has cleared a House or Senate committee. Republicans have long sought such a requirement, arguing it is needed to protect the integrity of Minnesota’s elections. DFLers have consistently opposed it on the grounds that it could disenfranchise certain groups like poor people and senior citizens.

Registered voters in Minnesota currently don’t have to show a photo ID when they check in at their polling place. Instead, they sign their name on a printed roster. Benson and others argue that unless voters are required to show a current ID, there’s no guarantee they’re not voting illegally.

“I was stunned by this procedure that we would not verify who people are, even if they are pre-registered,” said Laura Norlander, who testified Feb. 3 in support of Benson and Kiffmeyer’s bills.

Norlander, who served as an election judge for the first time in 2010, said she was surprised by “how many opportunities there are for fraud” at the polling place. Not only do voters not have to show a photo ID before receiving their ballot; they can also register on the day of the election without any form of identification just by having someone vouch for their identity.

Proponents of voter ID argue that, in theory, someone could spend an entire Election Day going from one polling place to the next, casting illegal votes. All they would have to do is give the name of a registered voter in that precinct and sign the roster.

But does it ever happen?

An oft-cited authority on elections, Mansky said he knows of not a single instance of voter impersonation fraud – the kind of fraud the bills would address – occurring at a polling place. Moreover, he argues it would be difficult to pull off. “Many of the judges know the voters by sight,” Mansky said. “You run the risk that someone is going to catch on that you’re doing something improper, at which point we report you to the county attorney.”

A voter fraud conviction, which is an automatic felony, is arguably a hefty price to pay for casting a few extra votes, which is why Secretary of State Mark Ritchie says voter fraud is so rare in the state.

“County attorneys are the ones who prosecute illegal voting in our state,” Ritchie said. “Generally, in each major election year, they report that it’s a handful of people prosecuted – almost all of whom are felons who voted before their sentence expired.”

The issue of felons voting illegal is relatively small – 38 cases were prosecuted in 2008 – and would not likely be addressed by a photo ID requirement. But supporters of photo ID say that misses the point: we would never know if someone did impersonate another voter.

“We presently don’t have a system to deter or detect when someone decides to lie about their identity and vote,” Benson said Feb. 9.

Whether there is evidence of fraud, opponents of photo ID legislation argue it would fence some legitimate voters out of the process.

Mary Lou Hill, a 94-year-old resident and member of the League of Women Voters, said many senior citizens lack the mobility and the financial means to track down and purchase birth certificates and other documents that may be required to obtain one of the free photo IDs provided for in the bills.

“There’s no question that these bills will disenfranchise thousands of senior citizens,” Hill said Feb. 3.

The vouching process, which both bills would do away with, is commonly used by people like seniors in assisted living facilities, college students, and people who move frequently and don’t make a habit of updating their driver’s licenses or state IDs. “Putting obstacles in their path to the voting booth,” in Hill’s words, might endanger those voters’ fundamental constitutional right.

The fear among many DFLers is that a photo ID requirement would suppress voter turnout among these key demographic groups by making voting more difficult for them. But Benson said experience shows it isn’t true. In Indiana, where a similar law was enacted, he said voter turnout actually increased – ironically, in counties with a higher percentage of Democratic voters relative to other counties.

“There is no consistent evidence that counties that have higher percentages of minority, poor, elderly or a less educated population suffer any reduction in voter turnout,” Benson said, quoting from a University of Missouri study.

Many other controversies surround Benson and Kiffmeyer’s voter ID proposals. Critics have voiced concern about the provisional ballot system provided for in both bills, and Kiffmeyer’s bill proposes a much broader overhaul of the state’s election laws that several groups have expressed concern about. Both bills are also projected to cost the state in the tens of millions of dollars.

But ultimately, supporters of photo ID believe it’s an idea that has broad public support and whose time has come.

“The perception of the vast majority of Minnesotans is that we have enough wrong with our current system that photo ID is needed,” Benson said.

Both bills now go to the House State Government Finance Committee. There are no Senate companions.

Article
molly.salzberger
Do NOT follow this link or you will be banned from the site!
X