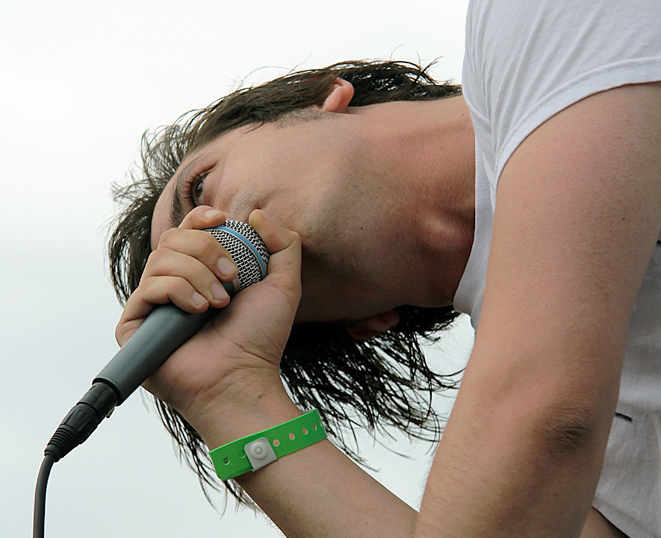 I can’t say exactly what Andrea was thinking, but there were a lot of things about the evening that did seem unreal. Mostly, it still seemed hard to believe that Eyedea—the MC, breakdancer, and rocker whose life the night celebrated—had actually died, just a few weeks before his 29th birthday, which was last night. Micheal Larsen, known as “Mikey” to his friends, died in his sleep on October 16, and the cause of death is not yet known, so there wasn’t even an explanation for Larsen’s tragically untimely demise. There was no disease to fight, no violence to decry. Eyedea is simply not with us any longer, and the First Ave event was a surprisingly intimate, brave acknowledgement of that fact.

At the request of Larsen’s family, a no-cameras rule was strictly enforced, adding to the unreal air: the normally bustling photo pit was empty, save for a single family representative holding a small video camera. Instead of the usual sea of point-and-shoot cameras and cell phones held aloft, people just stood and watched and listened as performers took the stage, one by one, to perform and pay their respects.

Instead of being a superstar jam session, the evening belonged to those who had lived and worked most closely with Larsen. Most conspicuously, prominent Rhymesayers labelmates including Brother Ali and the Doomtree Collective did not perform, yielding the stage to performers including Kristoff Krane, Carnage, No Bird Sing, Roma di Luna, and Eyedea’s longtime collaborator DJ Abilities. The singer-songwriter Kimya Dawson, a favorite of Larsen’s, made a surprise appearance, San Francisco rapper Aesop Rock joining her on stage at the conclusion of her brief set. Other out-of-town guests included Themselves, a hip-hop duo who toured with Eyedea & Abilities. Representatives of the 90s hip-hop scene in which Eyedea came of age included the Abstract Cats and the Battle Cats breakdance team. Slug (of Atmosphere) served as master of ceremonies, trying to explain the acts’ many interconnections to the many of us who weren’t intimately versed in the past 20 years of local hip-hop history.

The event had less the feeling of a conventional tribute concert than a genuine family celebration. Young children sat on the pizza counter at stage right, and relatives with all-access stickers came and went from the backstage area. A well-curated video tribute was shown, one not entirely unlike the slideshow my mother assembled for my grandmother’s funeral last month—but with more breakdancing and freestyle battles. Larsen’s mother Kathy stood, flanked by Abilities and Slug, to read a dark, rhythmic poem about hip-hop that Eyedea wrote years ago.

I did not know Larsen personally, and only saw him perform a couple of times, so for me the event was a real eye-opener. I learned a lot about the many worlds of Eyedea, and about the friends and colleagues who supported him and were inspired by him (as Slug noted at the evening’s conclusion, after a surging freestyle jam with all hands on deck) to better themselves as performers and as people. The show was also a dramatic demonstration of the diversity of hip-hop in the 21st century. Larsen had musical projects that fell into many genres, and sometimes transcended any genre, and those varied interests were represented on stage in a way that demonstrated how a talented and driven performer today can skate among worlds from rap to folk to rock; and without ignoring race, doesn’t have to be limited by it in the way that musicians formerly were.

It was appropriate that KRS-One, hip-hop’s most boldly proclaimed philosopher, was heard during a breakdancing scene in the tribute video, because Eyedea was very much a thinker. Interviews with him (including this 2008 interview republished in the Daily Planet) ranged across subjects from prosaic to cosmic, and in a video interview shown at First Ave, he was explicitly asked whether he believed in an afterlife. He made clear that he did not, and Tuesday night’s event was accordingly free of references to the supernatural.

At events following my grandmother’s death, we were constantly assured of her happy afterlife—but that isn’t where Micheal Larsen believed he was going, and he made the most of the time he had. The clear message on Tuesday night was that we should all do the same. Roma di Luna closed their three-song set with a performance of the Flaming Lips’ “Do You Realize?”, which Roma di Luna’s Alexi Moon Casselle said that he recently heard Larsen strumming on a guitar. The song might have seemed inappropriate at an event following the death of any other man, but on Tuesday night it seemed exactly right, and enormously moving.