A St. Paul firefighter uses a cup of water-on-a-stick to pour on an inch of water on burning corn oil inside their mobile fire demonstration (Photos by Stephanie Fox)

The mobile kitchen was the brainchild of Jamie Novak, a St. Paul fire investigator, who saw a similar unit on a trip to Australia and brought the idea to the department. After raising $30,000 through grants and donations, Novak has been bringing the unit to locations around the Twin Cities to demonstrate how mistakes in trying to put out kitchen fires can lead to disaster.  The three-sided unit is the first of it’s kind in the United States and is equipped with a working gas stove on which to show how typical kitchen grease fires start. 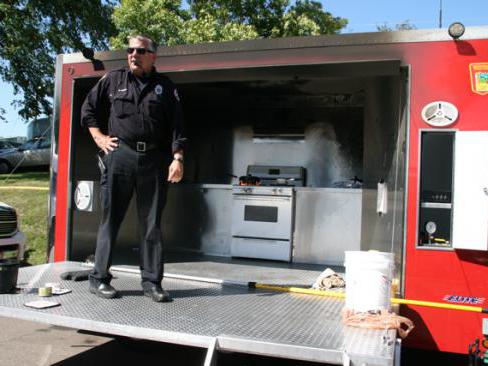 “The greatest cause of fires,” said Mark Monson, a St. Paul firefighter, who along with Novak, instructed the crowds every half hour throughout the day, “is men, women and children.” People make the wrong choices when dealing with kitchen fires and he said he hoped to show people safer ways to deal kitchen fires.

Inside the demonstration kitchen, firefighters heated a sauce pan with filled with only an inch of vegetable oil until it caught fire, then showed the correct way to put it out – covering the pan fire with a tight lid or a pizza pan. “Once you do this, keep the heat off for 20 minutes and call 911 so the fire department can come and check that it’s safe,” he said.

But many people try to put out grease fires by pouring water on it. “We want to show you why you don’t want to do that,” he said.

Standing 10 feet from the fire, a firefighter used a cup of water on a stick to reach the burning oil, then poured it on the flames. Instead of putting the fire out, a fireball filled the portable kitchen and burned for more than 30 seconds. 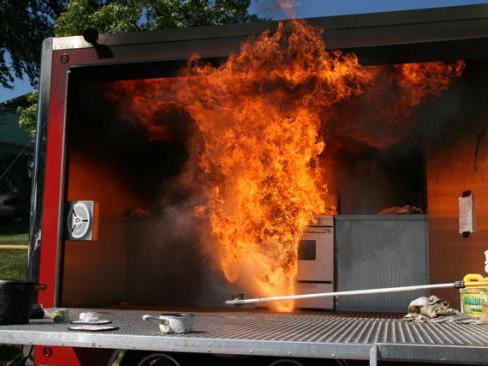 The hot oil explodes and the fire spreads.

Oil can catch fire at about 600º and older, reused oil can burn at a lower temperature which means leaving a pan unattended for only a minute or two can cause it to flame up. As little as one cup of water poured on one inch of burning oil in attempt to extinguish the fire can instead, generate 1,700 cups of steam in a matter of seconds and create a fireball of burning oil. 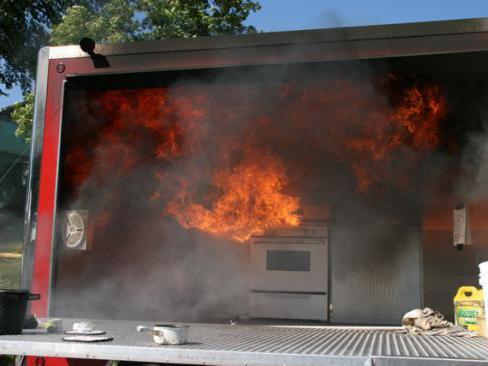 The fire begins to burn out, but the kitchen and anyone in it is heavily damaged.

The department said that they estimated they could reach several thousand people a day at the Fair.