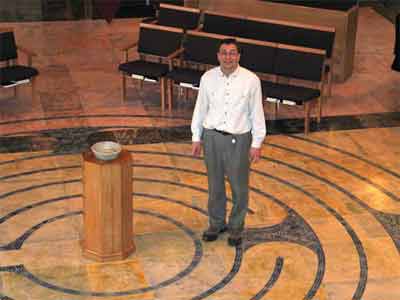 What does a small Lutheran church in Lauderdale, Minn., have in common with the great Cathedral of Our Lady of Chartres in France? Only one thing: Each has its own labyrinth.

For Pastor Dave Greenlund, a potter and visual artist, installing a labyrinth at Peace Lutheran Church fulfilled a vision he had for the congrega-tion when he arrived two years ago.

When Greenlund came, the group was down to about 20 congregants. He decided to enlist the power of art along with the power of prayer.

“I love art,” he says. “I have it all around and I believe in its power to tap into people’s creativity. When I first came here, it was a matter of do something or die. I wanted to try.”

Surveying the physical space, Greenlund thought that the church, which was built in 1954, needed a makeover.

“The sanctuary was inaccessible to wheelchairs, for one thing,” he says. “And we wanted to open up the space. The old pews had to go.”

Greenlund and Dan Mackerman, an artist and parishioner, lined up a group of people and removed the pews and carpet. Then the volunteers “marbleized” the floor by painting over the tile.

“That transformed the space,” said Greenlund. “Instead of pews, we have chairs and benches in a circle. It’s intimate, like a Quaker-style service.”

Lutherans facing each other?

As much as people liked the new floor and seating arrangements, Peace Lutheran was still missing something. Greenlund, who was intrigued by labyrinths, thought that adding a permanent labyrinth would complete the building’s transformation.

The church commissioned Lisa Moriarty to do the design, which was drawn onto the floor. Then Mackerman and crew cut a sponge to mimic a mosaic pattern in the labyrinth’s outline. One has to look closely to realize that those aren’t tile pieces but a painted floor.

The transformation worked and now, Greenlund says, “We have about 60 attending each Sunday. It doesn’t sound like much but we’ve tripled our attendance.”

The church has also begun adding art classes and wants to use the space for other artistic expression.

“I really believe in art and imagination as a catalyst for change,” says Greenlund. “It helps sustain us.”

As hip as now and as ancient as prerecorded time, labyrinths can be viewed both aesthetically and spiritually. A labyrinth is an archetypal design (usually a series of circle-shaped paths) found in many cultures (Celtic, Mayan, Greek, Cretan, Native American) and many eras (the earliest labyrinths date from 3000–4000 years ago).

Even nature has its own labyrinth designs, such as those found in seashells and spiders’ webs. Our fingerprints also provide a labyrinth of sorts.

Architectural labyrinths have several designs, such as the Classical Seven Circuit Labyrinth, which has a cross, a right angle and a dot in each quadrant, and has seven paths. This is often called the “Cretan Labyrinth.”

One early labyrinth legend is the story of the Minotaur, the half-man, half-bull creature that lived in the center of a labyrinth in Crete. Theseus managed to get to the center of the labyrinth, slay the Minotaur and find his way out again by following the thread he had trailed behind him on the way in.

Labyrinths can be as large as the one inside the Chartres Cathedral or as small as what can be drawn on a piece of paper. One can use one’s feet, fingertips or even a computer mouse to “walk” the path.

The labyrinth has come a long way from the Minotaur legend. Today it is primarily used as a meditation device for personal and spiritual transfor-mation. One moves along the path, pauses and reflects, moves again until reaching the center, then works one’s way back out again.

A labyrinth is not a maze, however.

According to Moriarty, “A labyrinth is a single path with a center. There are no tricks, no dead ends. It’s not a maze, which is like a puzzle where there are a lot of choices.”

Moriarty discovered labyrinths in 1991 and was captured by them. She even convinced her husband to mow a pattern of one in their back yard.

According to Moriarty, labyrinths’ popularity ebbs and flows. “There was a resurgence of interest about 20 years ago,” she says. “When the world is in turmoil, people seek a spiritual anchor. Many find such an anchor by walking the labyrinth.”

Entering the sanctuary at Peace Lutheran might remind one of a European villa with the wash of warm neutral tones on the floor, juxtaposed with the staccato pattern of the labyrinth outlined in blues. In this setting the labyrinth is as open and expansive as the worship space. With a high ceiling hovering overhead, the labyrinth immediately becomes the organic focal point of the room, with the baptismal font in its center.

As one visitor remarked, “The baptismal font is the beginning of your journey through your Christian life, and what better place for it than in the labyrinth.”

Peace Lutheran Church is located at 1744 Walnut St. in Lauderdale. Their worship service is at 10 a.m. on Sunday. For more information, visit www.peacelauderdale.com or call 644-5440.