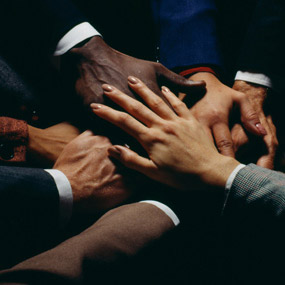 The bigger and more diverse a group, the tougher it is to prevent internal conflicts that grow from competing interests. Minnesota has plenty of these groups and some of them are more frayed than the Metrodome roof.

Part two of this series looks at other issues tearing us apart and keeping us from finding consensus on the common good.

To show that we’re not just picking on business, workers have examples of internal divisions as well. Take the recent Delta-Northwest merger. Workers from the newly formed conglomerate at Delta, a non-union company, vote against unions that had represented Northwest Airlines’ merged employees for years.

Some of this carries over North-South idiosyncrasies. But put in the language of business schools, it also means that a majority of those employees in what is now the nation’s largest airline voted to be “free riders.” The definition of free riders is a “party (or people) that benefit[s] from collective efforts but contribute little or nothing to the effort.”

Thus, Delta employees will continue to receive most of the benefits derived from collective bargaining at other airlines that have become the industry norm.

In other fields, Minnesota is especially blessed with natural resources. This is a burden, not a blessing, for anti-government forces because it takes money, scientists and programs to be proper resource stewards. However, people who realize these resources’ blessings still form associations to protect them according to personal priorities-such as fishing, hunting and farming.

Farmers have always worked within multiple associations divided along broad-based social, political and economic lines. They also form within more narrowly focused fields promoting the interests of special commodities that tend to be in conflict with the broad principals of other groups which they’re members.

Businesses more recently have been forming associations that represent certain industries and professions. Ironically, some of these new or more narrowly focused groups attempt to mitigate the damage done to their business by other organizations of which they’re also members.

Independent retailers and small business owners band together in groups such as the Metro Independent Business Alliance (Metro IBA) and similar groups in the St. Croix Valley and western Minnesota. Some benefit from the larger chamber of commerce’s lobbying efforts, but many are hurt by the stance it takes on other issues.

Minnesota’s huge health care sector divides along specialty fields and works to promote patient access to insurance and care when their other business lobbies are indifferent or actually erecting barriers to health care reform.

Manufacturers can be just as divided, seeing employees either as a cost burden or as their most precious, skilled stakeholders, depending on the sophistication of the industry and the value of their production.

This is what makes life difficult for associations that try to unfold too large an umbrella. Mancur Olson, a North Dakota farm boy who went on to be a Rhodes Scholar and economist at Princeton University and the University of Maryland, saw inherent problems with organizations.

His 1971 book, The Logic of Collective Action, argues that many government policies do not make economic sense because political power is not balanced.

He went on to say that unless the group is small or unless some form of coercion is employed, rational, self-interested individuals would not work to achieve common group interests.

This plays into another set of business theories with a local tie. Minneapolis native Michael Jensen (Harvard) and the late William Meckling (University of Rochester) advanced “agency theory” problems that would sometimes pit agent interests-corporate managers-against “principals”-the shareholders or bondholders.

Such agency theory problems had surfaced in a big way during the past election year in Minnesota. You may remember the GLBT community took prominent Minnesota-based retailers and manufacturers to task for huge campaign contributions to a political organization the GLBT community says was working against its issues.

Beyond social equity, economic interest groups should have also raised questions about the retailers’ and manufacturers’ donations. Why was no one from the business community criticizing these companies for supporting a political organization with policies that were working against federal stimulus activities? Essentially the political organization’s policies sought to undermined actions that helped keep cash registers ringing despite the weak economy.

This was a fight that shouldn’t have been left to GLBT issues alone. Where were the shareholders during this policy debate?

In a nation and state where 70 percent of Gross Domestic Product (GDP) is based on household consumption, the interests of shareholders are not the same as those of corporate officials looking to avoid taxes and preserve golden parachutes.

That top 1 percent can only buy so many work shoes, socks and underwear, or electronic gadgets.

As Minnesota and the nation muddle along trying to recover from a severe recession, two things should be clear:
The number of associations and organizations will grow to encompass the disenfranchised and those looking to bridge diverse interests. Second, associations formed around just saying “No” to people and programs will have even greater problems trying to lead.

Rare is the Minnesotan who is content with the way things are.