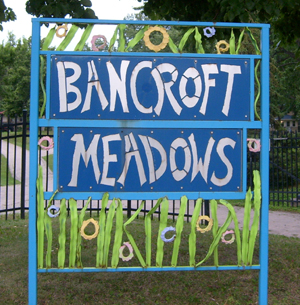 In the Old County (and it’s probably true of the Old Country your family came from-whether in Europe, Asia, Africa or South America) the village held the valley in common. All families were allowed to graze their livestock there and use the property as a common area for festivals, fairs and recreation. Crops were grown on higher ground to avoid the spring floods. But by the beginning of the 19th century in Europe the commons were being sold to individual farmers, and the children had to leave the land and emigrate to the New World.

While land hunger had divided the commons in Europe, European settlers in America, and especially in Minneapolis, remembered the pleasures of common areas and created a park system that became a lasting legacy for future generations.

There is a valley in South Minneapolis that runs roughly along Bloomington Avenue. Around 1905 the City created Powderhorn Park by dredging the swamp that ran from 28th Street to 38th Street and putting in an artificial lake and island. The rest of the swamp extended south of 38th Street all the way to Lake Nokomis. The lowest and soggiest point was around 42nd Street. In the 1940s the area was still a landfill-a great place to play if you were a kid pretending to fight the Second World War in the jungles of the Far East. The City kept trying to fill it in so it could be used for development. When they excavated for the Sears building on Lake Street in the 1920s they dumped the fill at 42nd Street. By the 1950s developers had cast covetous eyes on the property and decided the time was ripe for building ranch-style ramblers up and down Bloomington Avenue. Some people warned that the ground was unstable and wouldn’t support housing, but houses were built anyway. There was no end of trouble.

Foundations shifted. Sidewalks and alleys bent. People blamed the City for granting building permits. Finally, the City got tired of the complaints and purchased the properties, bulldozed them and created Bancroft Meadows from 42nd to 41st Streets and from Bloomington to 15th Avenues.

It’s a lovely little park, and it does what the village commons did in the Old Country. It drains the spring floods (in a modern way with large sewers at the lowest point in the valley to send the water to the Mississippi River) and it serves as a focal point for the community (just last weekend the Meadows hosted the annual Bancroft Mid-Summer Festival with music, entertainment and free ice cream).

It seems the more modern we become, the more we appreciate the way we used to be. The more things change, the more they remain the same.