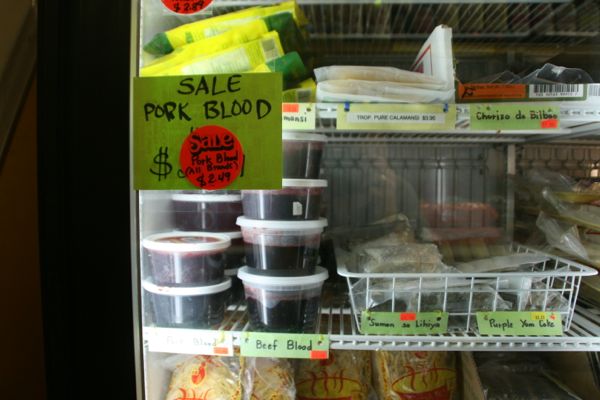 Some things are a bit exotic, but hurry, the pork blood is on special. (All photos by Stephanie Fox)

The parking lot at Phil-Oriental Foods is usually full and the store always seems packed with people from around the world. Customers are here, buying groceries from India, Malaysia, Indo-China, the Caribbean and West Africa. But, the focus at this grocery store is Filipino foods, a cuisine that’s a mystery to many Minnesotans, even the food-curious.

Phil-Oriental Foods has been selling retail and wholesale Filipino foods for 35 years, according to Julie Aquino, a long-time cashier at the store. She doesn’t cook much, she says, but she knows her way around the Filipino ingredients she sells.

A little culinary history: The greatest influences on Filipino food seem to have been Spanish and American. Other influences are the result of 700 years as a center of trade that brought people and goods from India, Indonesia, China, Japan and the Arab world. You’d expect highly exotic dishes to come out of this mix, but surprisingly, there are a lot of foods that, once you get past the unusual names, might seem familiar to Americans.

Filipino cuisine tends to be a little sweeter than American style. Take the chicken longanisa. These fresh frozen sausages evolved from the Spanish (not Mexican) Chorizo. Filipinos make theirs out of pork or chicken and flavor them with local spices. One of the most popular versions is the longaniza jamonada (sweet, like ham).  If you like sweet Italian style bratwurst, then you’ll like these. 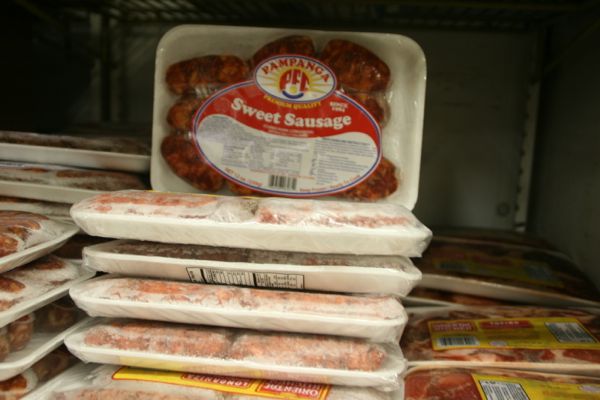 Cook these like brats or serve these small sausages with breakfast.

The store also sells dozens of Mama Sita’s brand of instant mixes to make traditional stews. I made Caldereta, a beef and potato post roast, using a chuck roast I braised until it was fork-tender. I just added the spice mix, (the package said ‘spicy sauce’ but it wasn’t) some potatoes, sweet peppers and sweet peas. (Actually, I don’t like peas so I substituted edamame.) It’s very good – flavorful and filling. 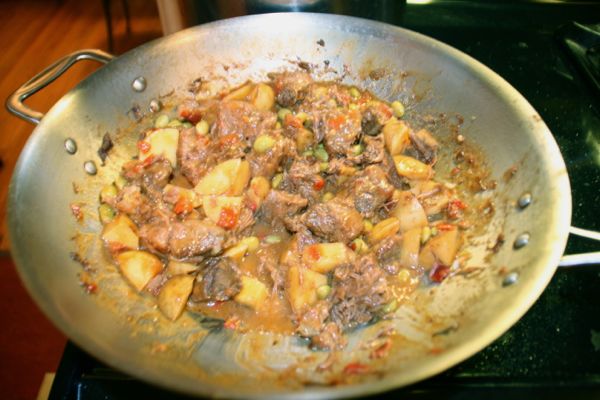 This savory stew isn’t spicy, despite the claim on the package.

And then there’s the Magnolia brand Cheezee Spread, a processed cheese product to spread (or squeeze) on bread. It can be used to make cheese dips, too. What’s more American than that?
I thought I’d actually found a replacement for the now-extinct American classic, Twinkies. Regent snack cakes, a wildly popular brand made in the Philippines, is available in a variety of flavors including pandan (bright green) and ube (bright purple), but I was a little disappointed to find that this sponge cake has no creamy filling. 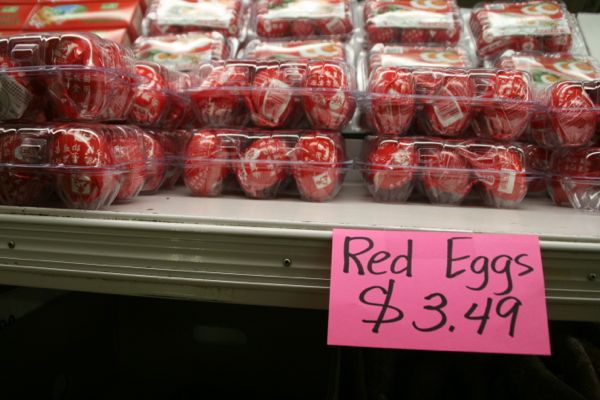 In the Philippines, these hard-cooked, salted duck eggs are often dyed red. Here, they’re wrapped and sold by the half-dozen.

Among the more unusual items for sale are the red eggs. These are salted, hardboiled duck eggs in the shell, used to make a salad that is, according to Aquino, the quintessential Filipino side dish. The eggs sold at the store aren’t actually red, but each is individually wrapped in red plastic. 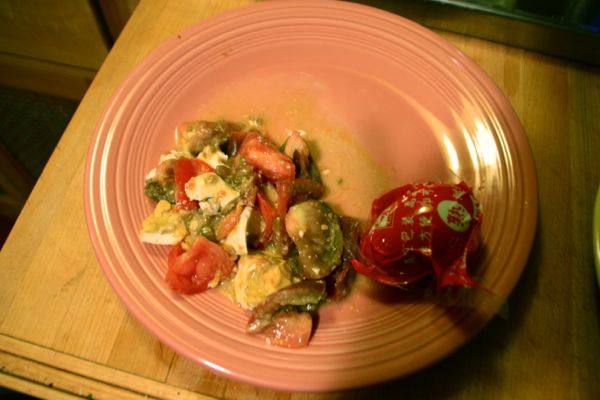 A mix of chopped egg, tomato and vinegar. A wrapped egg is shown on the side of the plate. One suggestions; wait to make this when you can use fresh summer tomatoes.

The recipe Aquino gave is simple. Cut up the eggs and serve them with tomatoes. Add a little vinegar. “We eat this at every meal,” she said. There are fancier, more elaborate versions of the salad as well.

One suggestion: don’t try to peel the eggs. Instead, unwrap them, cut them in half lengthwise and scoop out the egg like you would an avocado. They are very, very salty.

There were also a few other unusual Filipino ingredients for sale, including containers of pork and beef blood (“They call it ‘chocolate’” Aquino says) used to make a stew called dinuguan. There are small bottles of lye water to make ­– no, not lutefisk – but rice cakes and other desserts.

Phil-Oriental Foods is located at 789 University Ave. between Grotto and Avon streets in St. Paul. If a middle-aged white guy from Rogers, MN can shop here on the day before Thanksgiving for Filipino eggroll wrappers, so can anyone. 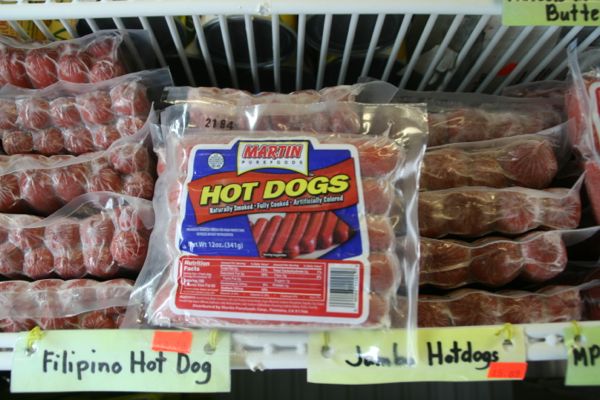 Eat these hot dogs on a bun with rice or add to stews or to make Philippine-style spaghetti Bolognese. As American as… 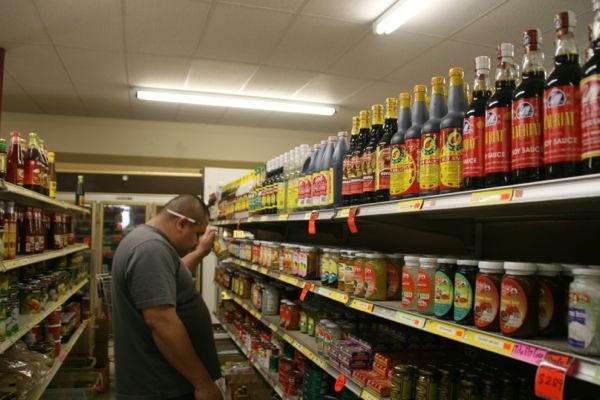 The store sells scores of sauce, from soy sauces to suka pinakurat, a mix of fermented coconut sap with wild-grown hot chilies.