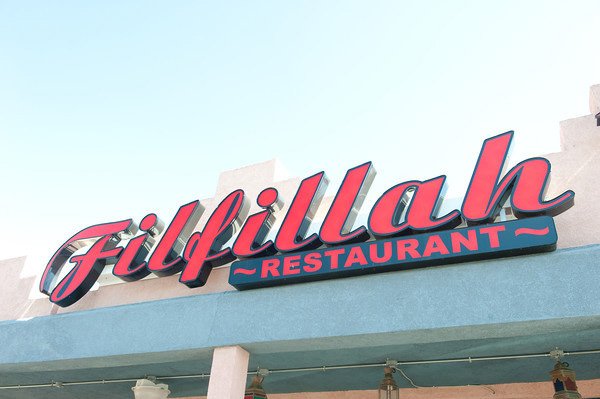 Lucky for me my daughter lives in Columbia Heights. She took me out for dinner in her ’hood, where Central Avenue easily rivals Eat Street in its array of enticing ethnic eateries.

Filfallah leads the pack. A casual, cheerful place brightened with walls splashed with persimmon, eggplant and tobacco further warmed by a fireplace clad in tiles the color of the Mediterranean Sea, it serves Turkish/Middle Eastern food as tasty as any I’ve experienced in Istanbul. And when I mentioned that to our waitress, she must have conveyed the message to the owner/chef, who left his stove to greet us and share thoughts about his homeland. (Turns out, he’s also a culinary school student working on perfecting French pastry and has served stints in the forward kitchen of the respected Haute Dish restaurant in the Warehouse District.)

This marriage of exacting technique with traditional recipes is what puts Filfillah ahead of the pack. The mezze platter (by itself a hearty dinner for two, $11) is a survey of the usual suspects, but each has been ramped up a notch in its preparation. The hummus is super-smooth, the baba ganoush—less ‘eggplanty’ than most, alas, but equally adept in texture. Tzatziki, that addictive yogurt-based sauce livened with cucumbers and a subtle trace of garlic, serves as dip for the tender falafel nuggets, far superior to the usual fried golf balls offered around town, and the dolma—stuffed grape leaves—prove another elevation of the art form. He’s enriched that usual bundle of rice and not much else with the addition of pine nuts, currants and herbs: absolutely sensational. His tabouli salad is super-green with minced parsley awakened with a spritz of lemon (but lacking the usual hint of mint). He tosses a generous handful of sharp and tangy kalamata olives onto the platter, along with a mini-mountain of crumbled feta, adds rounds of puffy, tender pita—another improvement on the usual—and sends out an edible portion of heaven.

We could have walked away happy right then, but hey: So we continued with the combo platter from the entrée list (its most expensive item—and I use the term in comparison only—at $16). Two of us barely made a dent in the lavish display, including shish kebabs—one each of tender lamb and tasty chicken—along with dual shawarma servings: slow-cooked sliced bits of marinated chicken and the same tasty treatment of a lamb/beef combo. The entrée comes with a big-enough-for-two Greek salad—more of those addictive olives and feta—and saffron rice pilaf. (Other entrees $10-13, or simply order the meat-topped shawarma salads, $10. Or the red lentil soup. Or pita pies or wraps. Well, you get the idea).

No, we didn’t save room for dessert. But for those with better self-control, the kitchen offers baklava and kunafa. No alcohol, and it’s certainly not needed—but the usual soda drinks plus Turkish coffee. Maybe that tiny, bitter, grainy dose is an acquired habit, but I’ve acquired it, all right, and it’s a grand way to end a lovely evening.