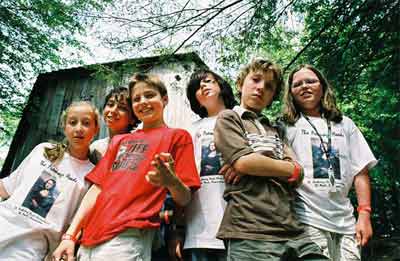 Sometimes the first problem is the hardest: Can we get along well enough to solve the next problem?

That was certainly the case for the Fromage Heads, a group of six fifth-grade students from St. Anthony Park Elementary School who participated in an after-school problem-solving program called Destination ImagiNation this past year.

When the six first got together in November, they had a hard time. Group member Ned Leebrick-Stryker said, “At the time, we didn’t work very well together.”

That’s a serious roadblock in a program that assigns a challenge to a group of students, who must meet it by using not only academic skills but also their abilities in goal setting, time and budget management, and team building.

The Fromage Heads had the assistance of two volunteer parents, but as team managers their role was peripheral; they were not part of the DI problem-solving process.

The group finally found some harmony when they developed what they call “a special circle order,” where each would get a turn to talk about an idea. Over time, they grew to appreciate the different skills and perspectives that each person brought to the group.

Everyone had a role. Ned was the leader, Rachel Hartnett the funny one, Maddy Hickel the creative one, Aaron Levin the artistic one, Ian Olesak the talkative one, Tom Stinar the engineer.

Once the group made it over that first hurdle, their creative energies merged and surged, carrying them to regional and state tournament victories. Then it was off to the University of Tennessee in Knoxville for the DestiNation Imagination global finals held May 24–27.

There were 20,000 people in attendance, including teams from nearly every state and province in North America and several other countries. The Fromage Heads were among the youngest participants.

The DI program at St. Anthony Park Elementary starts in fourth grade. In other communities DI includes students from kindergarten to college.

For the Fromage Heads, this was their last chance to perfect and present the skit they had been working on for months. In addition to performing, the team got to meet and trade DI pins with other participants from around the world.

DI participants choose one of six challenges. The Fromage Heads selected “How’d That Happen?” This category involves creating a skit that takes place in another country, including a bizarre event that must be portrayed through manipulation of props, and a hat that transforms a character.

The team brainstormed in their typically boisterous but eventually effective way. Based on Ian’s trip last summer to Paris, as well as the team’s technical abilities and interests in fine arts, their skit took its inspiration from famous works of art in the Louvre Museum in Paris.

The judges were impressed. The Fromage Heads won fourth place in a field of 74 competitors at Knoxville, and they also brought home a Renaissance Award, given for outstanding skill in engineering, design or performance.

It’s ironic that this group of young and noisy personalities won the hearts of the competition appraisers with their silence. Not a word was spoken from their entrance to their exit on stage. The story was told in the style of a silent film.

Thanks to a system of hinges and pulleys, the audience watched as Leonardo da Vinci’s Mona Lisa merged with the famous headless statue of the Greek goddess Nike, also known as the Winged Victory. The Winged Lisa journeyed through Paris to music provided by keyboard, clarinet and trumpet while placards helped narrate the adventure. Wearing a magical Disneyland Paris hat made of papier-mâché, she met and fell in love with Charlie Chaplin. Alas, in the end the fantasy creature was forced to return to the museum.

In addition to the challenge of creating their skit, the team had a financial task. They scheduled extra performances and made special appearances to raise money to travel to Knoxville. Thanks to generous support from individuals and businesses in the St. Anthony Park community, the team raised $3,000.

The students also gave credit to the parents, Kristal Leebrick and Seth Levin, who volunteered their time as team managers. Ned said, “Without them, we would’ve lost.”

Reflecting on the past year, Aaron remarked, “DI is really worth it, every single second . . . except maybe five.”

The whole team seems to agree. They are all looking forward to another effort next year.