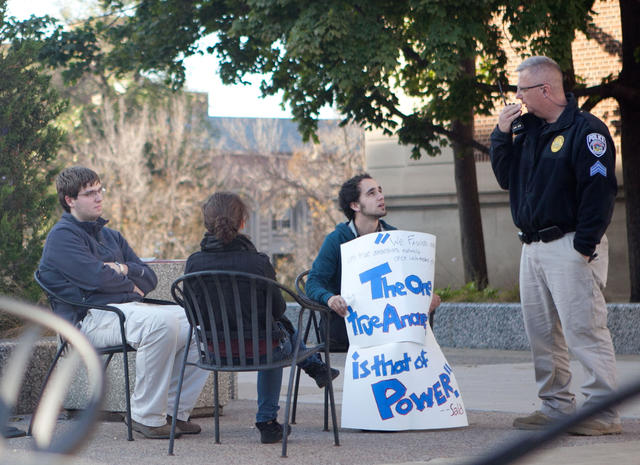 Aaron Thompson chats with a police officer while waiting for more students to appear for the march to downtown for Occupy Minnesota Thursday afternoon outside Northrop Auditorium. (Photo by Erin Westover)

The Occupy Colleges movement — one of the largest student protests to hit campuses across the country in decades — didn’t resonate with University of Minnesota students on Thursday.

Some students said miscommunication between organizers and protesters forced the University of Minnesota leg of the Occupy movement to stall.

A small group of student protesters planning to march from Northrop Auditorium to the Hennepin County Government Center downtown were left “high and dry” and opted out of their continued march to the Occupy Minnesota site.

Occupy Minnesota is a solidarity campaign to support Occupy Wall Street, which began as a small movement to protest “corporate greed” in New York Sept. 17.

Since, Occupy Colleges has spread across to college campuses across the country. Students walked out of class in solidarity to support the campaign. According to the Occupy Colleges website, 130 colleges, including the University, were confirmed to participate in the ‘National Student Solidarity Protest’ Thursday.

Sophomore Aaron Thompson, who went to the plaza last weekend during the protests, said he hoped there would have been a better turnout.

“This is a movement for everyone. [What happened] today doesn’t mean the fight is fading,” he said.

Students are concerned with tuition hikes and the amount of debt some have to obtain to continue going to school and graduate.

“We’re all here to voice our concerns,” Thompson said.

The students said the rally didn’t generate its expected turnout because there was no on-campus advertising. They said they found out about it through Facebook.

Dozens of protesters met at the Board of Regents finance and operations meeting Thursday to discuss what they said is a problematic relationship between the University and banks — primarily Wells Fargo.

“We don’t want the University of Minnesota to invest in corporations that harm our communities,” the group’s executive director Steve Fletcher said.

The group also said that foreclosures are affecting school funding.

About 13,000 homes in Minneapolis have been foreclosed since 2006, according to a Neighborhoods Organizing For Change report.

Police patrolled the meeting, acknowledging that the group remained peaceful.

“Wells Fargo is responsible for this reckless foreclosure crisis,” Fletcher said. “We need to stand up to end it.”