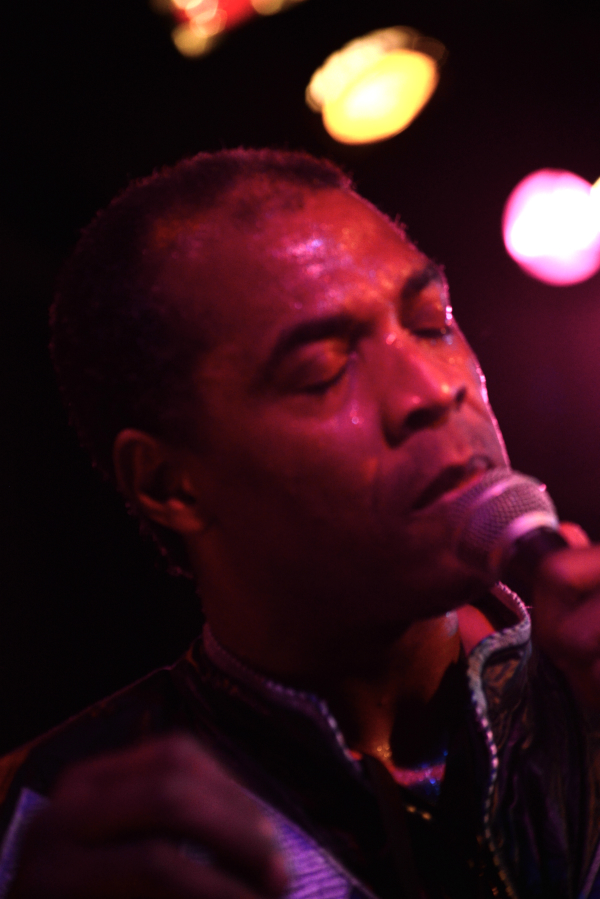 Femi Kuti and his band the Positive Force stopped through The Cedar Cultural Center on June 26 as part of a North American tour in support of his new album, No Place For My Dream, and The Cedar’s African Summer series. Over the course of the raucous, nearly two-and-a-half hour set he made it very clear the Afrobeat music coming out of Lagos, Nigeria is as good as it’s ever been. The son of Nigerian legend Fela Kuti, Femi played the parts of conductor, preacher, social commentator, and comedian, while showing off the musical chops that he has gained in his three decades plus in the business since joining his father’s band as a young man. Despite turning 51 ten days before the show, he displayed incredible power in both his singing and saxophone playing, and danced around the stage with the energy of a man much younger than him.

Femi’s band came out bit by bit to start the show, first the rhythm section, who started on a song and then introduced the horn section, who came out together with a flourish before joining in. The back up singers/dancers came next, followed by Kuti himself, carrying a trumpet and two different saxophones, with 12 people on stage when all was said and done. They played a few older songs (to get people acclimated to the music, according to Kuti) before tearing through a run of several consecutive songs off the new album. Much like his father’s music, the songs from the new album feature lyrics that are mostly political and unforgivingly realistic takes on the world around them, combined with upbeat music that tends to make people want to dance.

The band is playing almost entirely festival shows on this tour, and the Cedar was without question the smallest venue they will play during the run. That said, the attendance right before the show started seemed very thin, perhaps a result of the $45 ticket price. As the show went on though, the crowd filled in a little more, and what it lacked in size it more than made up for in enthusiasm. I haven’t seen that many middle-aged white people dancing like crazy since … well, I haven’t at all.

Kuti was clearly having a lot of fun with the crowd, especially with his stage banter in which he talked about being addicted to Twitter and giving lessons on how men can, how shall I say, last longer in bed. He was also having fun with his incredibly tight band, who were just as energetic and into the music as Kuti was. His three back up singers/dancers in particular boosted the spectacle, who performed choreographed dance moves throughout the entire show that put dancers in rap videos to shame.

After playing a short version of “Don’t Come Too Fast,” which is about exactly what you think it is, Kuti gave his lesson on how men can last longer (a comparison was made to putting a car in reverse, for those of you who are looking for tips), the band went backstage for an encore break. During this time I went to use the restroom and overhead another attendee excitedly speculate how long the encore would be–30 minutes? 45 minutes? An hour?! I was ready to say, “Sir, is this your first time at a concert?” Turned out that fellow knew what he was talking about.

Almost exactly two hours after they first took the stage, and 35 minutes and several songs into the encore, Kuti said he would love to play all night but there is a curfew so they can only play two or three more and took requests from the crowd, which included “Wonder Wonder.” After three more songs and another 20 minutes, the band finally left the stage for good, although with the amount of energy they had even during their last song, it seems like they actually could have played all night (which is something the Kutis are notorious for doing at their Shrine club in Lagos). There was a buzz in the crowd when the show finally ended, we all knew we had witnessed something very special.

While Femi may always be known as Fela’s eldest son first and foremost, his show at The Cedar showed that he is certainly an extremely capable torch-bearer of the music that his father made famous and that thankfully, this particular apple did not fall far from the tree.