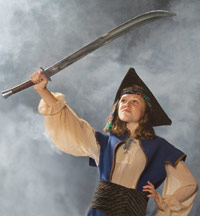 Those seeking female protagonists on movie screens have to look hard. According to a May 2012 report from San Diego State University’s Center for the Study of Women in Television and Film, female protagonists accounted for only 11 percent of all characters in last year’s 100 top-grossing U.S. films.

Things look a little better in the world theater in Minneapolis.

Looking back over her 15 years at Children’s Theatre Company (CTC), Elissa Adams said, “Many of our plays do center around strong female protagonists.” Adams is the director of new play development for CTC. Of the 35 new plays commissioned by CTC since 1998, 13 have had female protagonists-about 37 percent.

This state of play isn’t surprising, Adams said. “In the past 15 years there has been a real renaissance of women playwrights. And often, women writers tend to put female characters at the center of their plays.”

In addition, Adams believes that playwrights-more so than mainstream Hollywood screenwriters-“are drawn to stories that feel fresh, underexplored and as yet untold.” Because the experience and perspective of girls and women has historically been so under-represented, stories with girls at the center fit that description.

The play offers what Elissa Adams calls “a wonderful opportunity” to celebrate a brave, strong and smart young female protagonist. Enid Arabella starts out with several strikes against her: She’s poor; she’s a girl; and she lives in Victorian times-in sum, she’s utterly without status or power. Yet she overthrows an evil pirate captain and after assuming power, replaces his dictatorship with a democracy.

“All she has to go on is her wits, and she’s able to triumph,” Adams said. As pirate captain, Enid Arabella is “a great example of some of the qualities we tend to associate with female leaders-she builds consensus; she lets the best idea triumph even if it isn’t hers.”

While a coup, a CTC premiere is not the culmination, but rather the beginning of what is hoped will be a long journey. Adams’ goal is that plays premiering at CTC become part of the canon, going on to reach audiences at diverse venues-smaller theatres; middle schools-beyond the borders of the Twin Cities and Minnesota.

Many roles for women

CTC walks the talk-that girls and young women can become anything they want-not only onstage, but behind the scenes as well. According to Ward, all of CTC’s department heads are women-which she calls “unusual for a regional theater our size.”

While women are hardly scarce in the arts and nonprofits, “What’s extraordinary about [CTC] is that a lot of jobs traditionally held by men-technical and construction-related jobs-are held by women,” Adams said. “It’s pretty rare to have a female technical director, for example.”

In many different ways, the Children’s Theatre Company is giving girls and young women meaningful roles to which they can aspire-whether their interests run to playwriting, sound and lighting, marketing, production management, or swashbuckling.