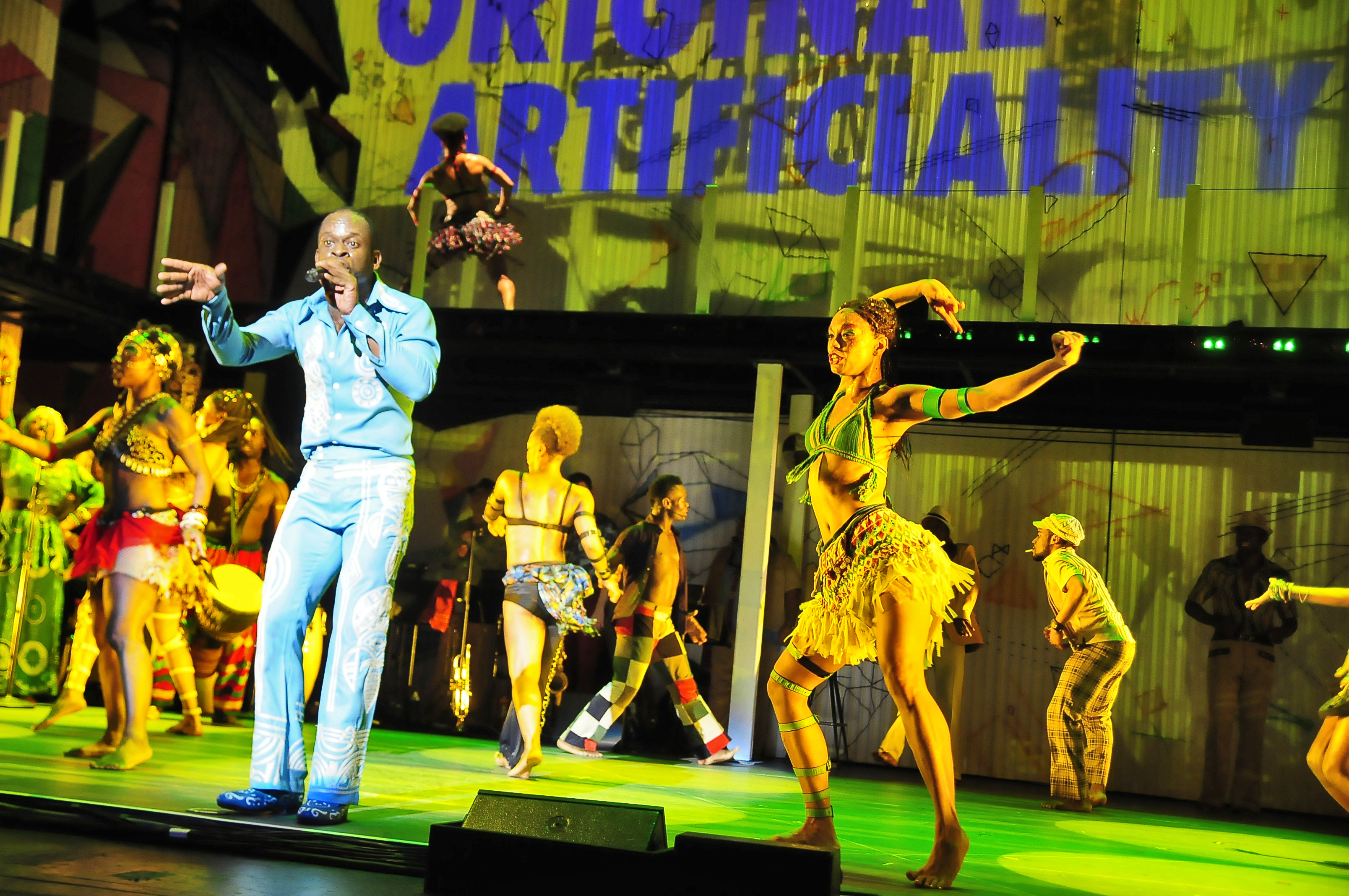 From the moment the lights go down and Fela Kuti strolls down an aisle towards the stage with both hands balled in fists, held high in the air, until the “encore” after the cast take their bows, Fela! is a triumph. The Broadway musical, which features the music and story of Nigerian musician and political figure Fela Anikulapo Kuti, has it all. The already energetic music played by an onstage band is given even more power by the blazing-fast moves of backup dancers and singers. The set and costume design are great. There are plenty of laughs and plenty of tragic moments, and they are all part of a compelling (and true) story.

The show begins as if the audience were attending a concert at Kuti’s famous Shrine night club in Lagos, Nigeria. Fela (played by Adesola Osakalumi at the June 13 performance), none too happy about the lack of dancing in the crowd, busts through several of his songs before telling the crowd that this will be his last show ever at the Shrine and that he will be leaving Nigeria for political reasons.

From there, a flashback takes us back to the beginning where Fela seems like any other young man: more interested in making music than making a difference. He left his native Nigeria to study music and eventually made his way to America, where he was influenced by a woman who was a part of the Black Power movement. Nigeria had recently been freed from the yoke of the British Empire, but that only meant trading in one oppressor for another, and the new tyrant was home grown and even more brutal.

Fela decides to return to Nigeria so he can stand up and fight against the new government, but he soon finds out just how brutal they can be. As someone who has been listening to the man’s music for quite some time, I knew he was a very political person, but I had no idea some of his songs were autobiographical. I never figured that the song “Expensive Shit” was about, well, actual shit: the fecal matter that Nigerian cops wanted to look through after Fela swallowed a joint that they had planted on him in an attempt to frame him. Before this show I saw him as a musician first and a political figure second, but now I see I’ve had it wrong.

It’s hard to imagine Bob Dylan actually living his songs, but that’s exactly what Fela did. Intrigued by the story I saw, I watched the documentary on Fela Music Is The Weapon and found that just about everything in the show was indeed true. In fact sometimes reality was less believable than what was portrayed on stage, most notably when he married 27 of his back up singers and dancers in one fell swoop. That was real life, but he only marries eight on stage.

That there are at least eight female backup dancers on stage should give you an idea of how many people are on stage in most scenes. There’s a large band in the back corner of the stage, and they are joined by more than a dozen dancers and singers. It’s not hard to see why Fela and his band needed to use the 7th Street Entry as a dressing room when they played First Avenue in the 80s. Fela is always the star of the show: the literal and figurative spotlight is on him almost the entire time, but the constant crowding and emptying of the space around him makes the show very interesting visually. The set is simple—the stage at the Shrine with a catwalk along the back—but it comes to life with all of the brightly dressed dancers on stage. Another nice visual touch is a video board that sometimes displays the lyrics to the songs as they are sung, particularly those of the autobiographical songs.

Having seen two of his sons (Femi and Seun, who still tours with his dad’s Egypt 80 band) perform in concert, I can safely say that the musical portrays the musical part of Fela’s life accurately. Even as his life was being torn apart around him, he was still smiling, still dancing, still making music, and still performing with his band at the Shrine until the sun came out. The energetic song and dance keeps the show lighthearted and fun, although perhaps a little too lighthearted for a few crowd members who could be heard chuckling awkwardly at a tragic event. There was no chuckling, though, in an extremely powerful final scene set to the song “Coffin For Head of State”, which is yet another tragic song that I never realized was entirely autobiographical.

Whenever a story is adapted to another medium, fans of the original story have can fairly assume it will be bastardized in one way or another. That is not the case here; in fact I came away knowing much more about Fela than I did before. Even people who have never heard of Fela! should find this story compelling, and they didn’t even have to make anything up!

Fela! encapsulates the essence of the man whose story it tells, and as a result feels very genuine and full of soul. In other words, it’s the exact opposite of Rock of Ages, and I can think of no higher praise.