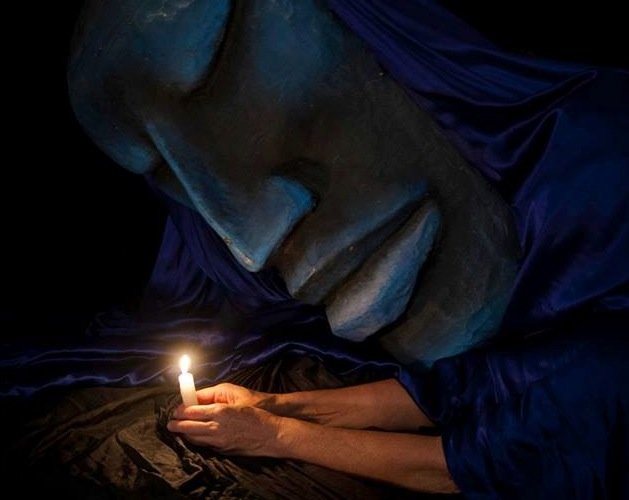 For their production of Between the Worlds, a remount of a Winter Solstice show first presented in 1992, In the Heart of the Beast Puppet and Mask Theatre asked me to moderate a panel discussion about the history of feminist theater in the Twin Cities. It was a great opportunity to speak with some of the participants of theaters that I had researched last year as part of my research project on theater in the Twin Cities in the 1960s and 70s.

Between the Worlds was created in 1992, and it definitely feels right to understand it in the context of the feminist movement of the 1970s and early 80s. Though it touches on universal themes of life cycles, seasons, and the solstice, there are aspects of the show that speak specifically to the experience of being a woman, not the least of which is the all-women cast of the production. My experience of the piece felt like a celebration of the female, and of the multi-generations of women that make up a community. It also seemed to make a statement about counteracting negative stereotypes and lack of representation of older women on stages and in the media. I’m pretty sure at this show I witnessed more women over 50 than I’ve ever seen on any stage before, and many younger women as well.

Esther Ouray and Laurie Witzkowski, who co-created the show, had both been members of At the Foot of the Mountain, the feminist theater company based in Minneapolis that’s most associated with playwright Martha Boesing, the company’s first artistic director. What I found particularly fascinating was that as panelists Ouray and Witzkowski, as well as HOBT’s Sandy Spieler and, to a certain extent, Susan Gust from the Circle of the Witch, said they didn’t at first recognize themselves as being feminists. I think for people in my generation maybe it’s more of a given that we are feminists (my sister wrote a great blog post this week about just this). Sure, there are women my age who don’t consider themselves feminist, but I feel like it’s more breaking off from the norm rather than what it was 40 years ago, when calling yourself a feminist was a scary thing.

In describing the process of At the Foot of the Mountain, Witzkowski talked about doing daily “feeling circles” where each of the performers would offer a “check-in” about where they were and what they were bringing to the process that day. She described it as a part of becoming authentic performers, and it was also a way to “foster organic and egalitarian relationships within the work.

I’m fascinated by the feeling circle concept. I’ve done check-ins before in rehearsals, but I don’t think they really compare to the sometimes all-day process of the original feeling circles. When I’ve done that kind of practice, I have had feelings similar to what Witzkowski described — that they can be “sometimes irritating, sometimes exhausting and sometimes amazing.”

Susan Gust, from Circle of the Witch, described a similar concept called criticism/self-criticism, which involved recognizing your state of mind and being and how it would impact others. Like the feeling circle, it would sometimes go for a long time, and could be aggravating, but was all about fostering relationships within the group.

I wish more of this kind of thing were still done today. In world where everything is fast-paced and results-oriented, I wonder how many problems we could avoid by really listening to each other as people, and developing understanding relationships with the people we interact with on a daily basis. Even in this world of social networking, when someone puts out an honest status message about what they are actually feeling that day, it’s seen as “insufferable”, or “over-sharing”. And in personal and work relationships, often the day-to-day check-in is overlooked.