Federal workers staged lunch-break demonstrations at three locations in the Twin Cities metro area Thursday, warning the public about potential cuts to the Social Security Administration and their impact on middle class Americans. The American Federation of Government Employees organized the demonstrations across the country in response to news that the so-called Super Committee, 12 members of Congress charged with engineering $1.5 trillion in deficit reduction over the next decade, is eyeing an overhaul of the Social Security Administration.

Sharon Schwartz, AFGE Local 3129’s representative in St. Paul, said many of the changes under consideration would be bad for the agency’s workers – and worse for the seniors, families and disabled people who depend on Social Security.

“This is an assault on the very fabric of Social Security,” Schwartz said. “There’s no doubt in my mind that in the long run some of these proposals are meant to replace Social Security. This is a betrayal of the public trust.” 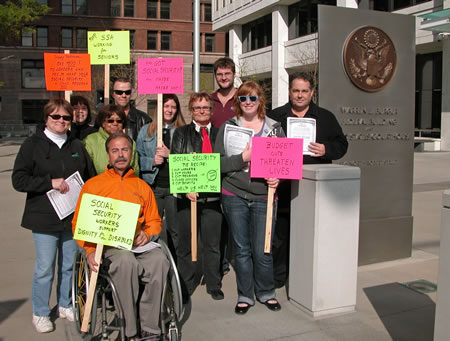 AFGE members and other workers rallied in support of preserving Social Security. (Photo by Michael Moore)

Social Security currently has $2.7 trillion in surplus funds – enough to pay benefits owed through 2037. With minor changes to eligibility or funding formulas, Schwartz said, the agency “easily” could become solvent through 2087.

Since Social Security is not contributing to the nation’s deficit spending, workers say, it should not be part of the deficit-reduction talks. But members of the Super Committee see things differently.

Among the changes being considered:

Already, the Social Security Administration has begun bracing for a 10 percent across-the-board cut in funding. Congress has until Dec. 23 to enact the Super Committee’s deficit-reduction proposal; otherwise it triggers $1.2 trillion in federal spending cuts that would hit the agency hard.

Steve Hansen, who works in the St. Paul offices, said he and other workers have been told positions may be eliminated and remaining workers could be furloughed up to 24 days next year.

“We want to be able to serve the people of the United States and these cuts would threaten that opportunity,” Hansen said. “We’re already stretched pretty thin as it is. It’s hard to keep up, to provide the level of service people really deserve.”