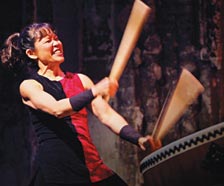 Iris Shiraishi will never forget the day she landed in Iowa, ready to start graduate school. Hawaiian-born and -raised, she had never experienced a real winter.

“I walked off the plane in Cedar Rapids,” she said, “and it was 17 degrees below zero. I thought I was going to die.”

More than 30 years later, Shiraishi has made the Midwest her home, subzero winters and all. Since 2010 she has been artistic director of Mu Daiko, the taiko drumming ensemble affiliated with Mu Performing Arts. As a composer, performer and leader in a genre of music that traditionally has been dominated by men, Shiraishi has broken and continues to break down barriers.

While growing up on the island of Oahu, Shiraishi sang in church choir, took piano lessons, participated in high school band and adored “The Sound of Music” like many American kids. However, some of her early exposure to music was particular to her upbringing.

When she was in fifth grade, a teacher who was part Native Hawaiian introduced her to traditional Hawaiian music and celebrated Hawaiian May Day with her students. In sixth grade, a Japanese-American teacher incorporated the ukulele, a Hawaiian instrument, into his curriculum. These experiences instilled a love of music in her from an early age.

“I never had any serious doubt that it was going to be music for me,” she said.

Shiraishi went on to study music composition at the University of Hawaii in Honolulu. She recalled feeling a healthy skepticism about her own talent, coupled with an awareness of her gender and ethnicity.

“Being a woman, being not white, being Japanese-American, was I ever going to be able to measure up?” Shiraishi said.

She credits some of her undergraduate teachers for inspiring her and “opening my eyes.” One influence was Nancy Van de Vate, a one-year visiting professor of composition. As the founder of the International League of Women Composers, Van de Vate personally encouraged Shiraishi.

“She was the one who said it was possible for me to go out there and become a serious composer,” Shiraishi said.

Shiraishi went on to pursue a master’s degree in composition and later a master’s in arts administration, both at the University of Iowa. There she noticed a stark contrast between the number of men and women in her chosen field.

“There were three or four women, combined master’s and doctoral students, in a class of 20-25. All of the composition faculty were white males. Musicology was all male. In my History of Western Classical Music class, you could count the women we studied on your fingers,” Shiraishi said.

This surprised her: “I thought, ‘We’ve been through the 60s. Doors should be wide open by now.'”

Still, Shiraishi made it through her program and earned her degrees. She also met her future husband, Alex Lubet, in the process.

After relocating to the Twin Cities, Shiraishi went on to receive a Ph.D. in music therapy. She established the music therapy program at the well-respected Reuben Lindh Family Services program, which served mothers and children from marginalized communities through music; she worked there for eight years.

In 1997, Shiraishi was introduced to what is now Mu Performing Arts (then called Theater Mu) through a friend of her husband. She attended the play “Paper Angels” and met Mu artistic director Rick Shiomi, who was just starting to teach taiko classes. He encouraged Shiraishi to join. Almost immediately, she was hooked.

“Taiko seemed the best of all worlds,” she said, “There was culture. There was artistry.”

More than 15 years later, Shiraishi is now the artistic director of Mu Daiko, overseeing a 10-member ensemble, one main stage concert a year, a taiko school that serves more than 200 students annually, and many outreach events and school residencies around the state. She also has returned to composing.

“When I left the master’s program, I was not interested in composing,” she said. “Now it’s very important to me. It’s the ultimate expression.”

A style all her own

Through taiko, an art form established and historically dominated by men, Shiraishi has created and developed a distinctive style. Her compositions regularly combine technical skill with movement and theatricality.

“When you’re hitting a big drum as an Asian-American woman,” she said, “you’re making a statement. You have a voice.”

Her taiko-playing and composer colleague, Jennifer Weir, says of Shiraishi: “She never lets herself get too comfortable, always pushing to the next edge of an idea, risk or deeper exploration.”

For inspiration, Shiraishi looks to those who have supported and encouraged her over the years, including her husband; Weir; and theater colleague Zaraawar Mistry. She views artists such as choreographer Twyla Tharp and theater director Julie Taymor as role models for their bravery and fierce determination.

“That fearlessness,” Shiraishi says. “That’s what gives one hope.”

Her advice to young women artists?

“Believe in the truth about yourself.”