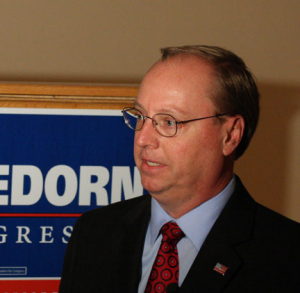 In his new “white paper” on terrorism, First Congressional District candidate Jim Hagedorn offers some controversial rhetoric: “Young men from Islamic-dominated nations, who have no legitimate reason to visit the United States, should not be granted access to our country,” he writes. Later, he provocatively states that “[t]errorists should be given last rites, not Miranda Rights.”

But when asked by the Minnesota Independent for details on specific terror-fighting strategies – what he considers “legitimate” reasons for U.S. visits by Muslim men, for instance – the Blue Earth Republican’s response was all of 25 words long, delivered by cellphone text message.

Hagedorn’s treatise whacks Democrats in the shins for “mismanaging the terrorism issue”:

Rep. Tim Walz’s support for President Obama’s closure of the Guantanamo Bay military prison; Walz’s suggestion that al Qaeda terrorists be housed in Rochester’s Federal Medical Center; Walz’s opposition to anti-terrorism and counter-terrorism measures used to monitor and intercept enemy communications in Islamic-dominated nations; and Walz’s support for the Obama administration’s policy of “Mirandizing” captured terrorists, is proof of the Congressman’s complete lack of appreciation, understanding, and weakness on the continuing terrorism threat to America.

He also picks up GOP talking points about the Obama administration, stating that it’s “handling terrorist activity as ‘a law enforcement matter,’ rather than ‘an act of war.'” (One needn’t go far – The Daily Show, say – to debunk that claim.)

But the paper is scant on details of what Hagedorn would do differently. The Minnesota Independent posed several questions to Hagedorn on ideas in his paper, including what methods he supported for assessing the guilt or innocence of terrorism suspects; whether he considered tourism or study “legitimate” reasons for Muslim men to visit the US; and what he would do to prevent another tragedy like the one at Ft. Hood.

That request was met, hours later, with a lone text message:

“The terrorism paper outlined my philosophy that terrorists must be dealt with as enemy combatants and that my approach contrasts sharply with Obama/Pelosi/Walz.”

Hagedorn, and fellow CD-1 GOPer Allen Quist, are both invoking terrorism in their campaigns. The pair got a “thumbs down” from the Mankato Free Press editorial board last week for the negative tone of their campaigns, including Quist’s headline-grabbing statement that fighting “radicals” like Walz and Barack Obama was a bigger “battle” than fighting terrorism.

Quist was called out on MSNBC for using the “terrorism exploitation machine” in hopes of winning election.

Hagedorn, with a terrorism “white paper,” now joins Quist in that camp, says Hamline University professor David Schultz, although he disputes the use of the term. “It’s clearly not a white paper,” he told the Minnesota Independent, stating that such documents are usually nonpartisan, reference scholarly sources, weigh competing options, and, in many cases, arrive at options for potential plans of action. “It reads like a candidate’s press release…. This is really more about ideology and fear mongering than anything else. “

But unlike Quist, who prioritizes defeating Walz and Obama higher than fighting terrorism, Hagedorn sees the two as directly linked. He ominously states: “[D]efeating al Qaeda may be contingent upon reclaiming political power from the liberal Democrats.”

In Schultz’s eyes, though, they’re using nearly identical rhetoric. “In a variety of ways, they’re doing what I call interesting McCarthyite actions… It’s a form of red baiting: Equating Democrats and liberals with Muslims and terrorists. It just depends on where they want to put the accent.”

He says Hagedorn’s paper “just reeked of all the worst things you do when you want to conjure up people’s fears and prey on people’s racism.” But, he concludes, “often it’s incredibly effective.”

While Schultz  says the First Congressional District is relatively conservative with a low percentage of Muslim residents, the Cook Political Report, as of Jan. 15, still lists Walz’s seat as “Likely Democratic.”