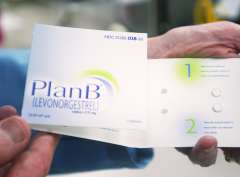 Stephen Cain holds a package of the drug Plan B, an emergency contraceptive.

The Food and Drug Administration’s announcement of a new push to sell emergency contraception without a prescription is prompting feelings of relief and concern in the University of MInnesota community.

On July 31 the FDA announced plans to make a decision within the next few weeks on whether the drug, known as Plan B, should be available without a prescription for women 18 and older.

The pill’s manufacturer, Barr Pharmaceuticals, proposed that the pill be kept behind the counter at pharmacies and sold only by pharmacists, said Stephen Cain, a pharmacy supervisor at Boynton Health Services.

Several University health professionals, like Boynton Health Service Director Edward Ehlinger, said that if the pill were to became available without a prescription, it would be a much-needed change.

“It should have been over-the-counter a long time ago,” Ehlinger said. “I see no reason not to have it over the counter.”

“Though some people object (to the drug) on religious grounds because of their definition of when life begins, it appears that is less of an issue as we learn more about the actions of Plan B,” Ehlinger said. “I think as more information comes out there may be less opposition to Plan B than there has been up to this time.”

But Valerie Johnson, a counselor with Choices, a Christian pregnancy counseling service, said that as far as she can tell from the information she’s received, Plan B still can interfere with implantation. And that means that it terminates the pregnancy, she said.

“We would be against it,” Johnson said of the change. “And it seems like if it was available over the counter that would be a really quick and easy out for ladies who find themselves in a crisis situation … and yet sometimes with the easiest way out, you miss out on a lot of life’s rewards.”

Katherine Lust, an assessment specialist for Boynton Health Service, and Cain both said some might worry that wider availability of the pill will discourage people from using regular birth control, such as condoms or pills.

But Lust cited Boynton’s 2004 survey of sexual behavior among University students, which shows that of the 18- to 24-year-old women surveyed, almost 10 percent had used emergency contraception in the past year.

But 80 percent of those who used Plan B used it only once.

“People have this misconception that people are using (Plan B) all the time,” Lust said. “In fact, this (study) kind of dispels that myth.”

Cain said he doesn’t think wider availability of Plan B will promote promiscuity.

“It’s inescapable that people are going to behave the way they’re going to behave – I don’t think the availability (of Plan B) will affect that,” Cain said. “In countries that have Plan B over the counter, like France and the Netherlands, they have not seen an increase in sexual activity among their population.”

Religious studies senior Brea Atkinson said she has had to help friends get access to emergency contraception. She said she thinks it’s unfair for Plan B to not be available in situations beyond someone’s control.

“You never know what situation the person was in – it could be a rape. And not being able to get (Plan B) would have a huge impact on their life,” Atkinson said.

“People still need to be responsible in their sex lives and use other forms of contraception,” she said.

Cain and Ehlinger said doctors and pharmacists might have to do more educating if the pill becomes more widely available, to make sure people don’t use it improperly.

“This is a wonderful opportunity for pharmacists to practice their profession, to make a difference and to educate patients,” Cain said.

Although Plan B was recommended for over-the-counter availability by an FDA advisory board several years ago, Ehlinger said he thinks it will pass this time.

“I think they will approve this for people over the age of 18. And the fact that it’s going to be behind the counter – I think that will be just enough to mollify the people who are opposed to it,” he said.