FBI agents raided the homes of six activists in Minneapolis and two in Chicago on September 24, seizing computers, cell phones, CDs, files and papers. They left behind subpoenas ordering at least some of the targeted individuals to appear before a federal grand jury in Chicago. The FBI agents were seeking evidence of ties to “FTOs,” or foreign terrorist organizations, including the Revolutionary Armed Forces of Colombia (FARC) and the Popular Front for the Liberation of Palestine (PFLP).

Steven Warfield, the FBI media coordinator, said that six warrants were issued in Minneapolis and two in Chicago as part of a terrorist investigation.  The FBI agents were searching for evidence of “material support to terrorists.”  When asked about any subpoenas that were issued today, Warfield said “I can’t tell you about any grand jury activities.”

CORRECTION 9/26/2010 Peter Erlinder teachs law at William Mitchell College of Law, not at the Univerity of Minnesota.

William Mitchell Law Professor Peter Erlinder, who was arrested this summer near the Rwandan capital for representing Victoire Ingabire, attended a press conference at one of the homes that was raided on Park and 29th Street.  He said that the raids today were not simply a small issue that happened on the South Side of Minneapolis.  They were the result, he said, of a recent Supreme Court ruling, Holder vs. Humanitarian Law Project, which upheld a statute that made it illegal to support any organization that the Secretary of State deems terrorist because it is opposed to U.S. policies.  The Supreme Court ruling makes providing “material support” to terrorist organizations a felony even if that support was peaceful.  Thus, a lawyer providing legal services or a doctor providing medical services to a terrorist organization would technically be committing a felony, Erlinder said.  “The individual doesn’t have to intend to be furthering the illegal activities,” Erlinder said. 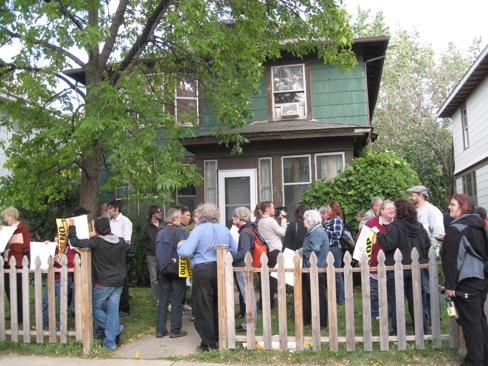 One of the homes that was raided was that of Mick Kelly and his wife, Linden Gawboy.  Gawboy said that at seven this morning, while Kelly was at work, she heard banging on the door.  She heard them say that it was the FBI and they had a warrant.  “I asked them to put the warrant up to the peep hole,” she said.  She was struggling to read it, and asked them to hold it up longer, at which point the kicked down the door.  The FBI then searched the house while Gawboy watched.  “We have lot of junk here- we’ve lived here a long time,” Gawboy said.

The agents took computers, Kelly’s cell phone and passport, cds, and boxes of papers, including Gawboy’s personal papers although the warrant was for Kelly’s possessions.  “They also broke my fish tank,” she said.

In the late morning, men in three piece suits arrived and delivered Kelly a subpoena.

Gawboy and Kelly have both been outspoken about injustice and peace for many years, and edit the newspaper Fight Back News.

“I think it was a terrible injustice against free speech,” Gawboy said.  “But it doesn’t matter-we’re going to keep speaking out.”

Mick Kelly said that he is “angry that the government is targeting folks standing up against war and injustice.”  He said it was premature to comment about whether he would be showing up to the grand jury in Chicago. Kelly’s subpoena ordered him to bring: 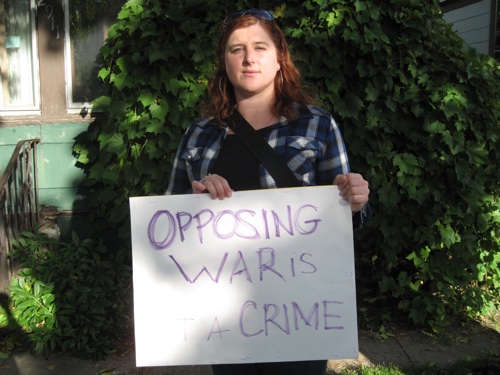 29-year-old Tracy Molm, who also attended the press conference, said she was woken up at 7 a.m. this morning to pounding at her door.  The FBI agents shoved a search warrant in her face and she was told she could not leave the couch.  They were at her apartment for two and a half hours.  They took her computer, cell phone, bank statements, a poster she made during the RNC, and a Palestinian flag that she bought when she visited the country in 2004.  Her trip was part of a solidarity delegation where she spoke with community groups in Palestine, she said.  She is a former member of the Anti War Committee and also has been involved with the Freedom Road Socialist Organization.  Currently she is a member of Students for a Democratic Society.  She said she was subpoenaed to a grand jury in Chicago in October because of her activities with the Anti War Committee.  She said the agents also mentioned Colombia, although she has never been to that country.

Following the press conference, supporters gathered at Walker Community Methodist Church, where more than a hundred people gathered to show solidarity for those whose homes were raided.  At the meeting it was announced that there will be a rally/protest on Monday at the FBI offices at 111 Washington Ave S at 4:30 p.m.  “They raided our homes, let’s raid theirs!” one supporter said. 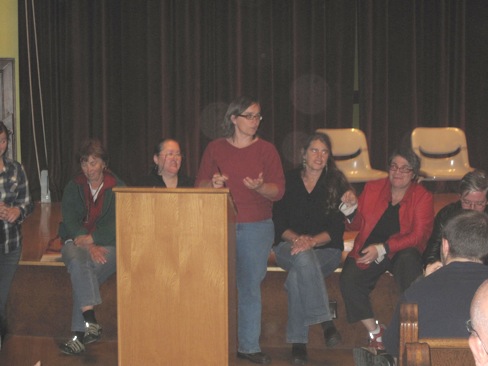 Steff Yorek, who attended the meeting at Walker, said her home was raided at 7 a.m. this morning just as her daughter was waking up.  Yorek was just walking up to the door when eight FBI agents “pushed their way into the house.”  Her daughter, who is six years old, was very frightened, she said.  Yorek was subpoenaed to testify before the grand jury in Chicago along with her partner Jessica Sundin.

Yorek said the subpoena indicated her activities in regard to Palestine, Colombia and two organizations, FARC and PFLP. “I’ve never been to Colombia or Palestine,” she said, “but I have expressed political support for people.”  In particular, she has spoken out politically in support of FARC leader Ricardo Palmera,  and attended his trial in Washington D.C., but she said “as far as I know, it’s not illegal to express political beliefs.”

Yorek said she will be consulting with an attorney, but that she is “disinclined to cooperate with a grand jury investigation.”

FOR MORE INFORMATION AND LINKS, SEE REPORTER’S NOTEBOOK ON THIS STORY – and video coverage from The Uptake.