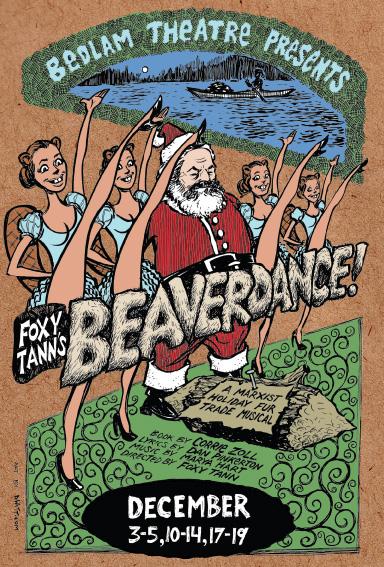 “I’m starting to trust you,” said my sister as the lights rose after Fat Man Crying at the Minneapolis Theatre Garage, referring to the fact that I’d recommended the play to her. It’s the show’s third year running, and I’m hoping it lasts at least 80 more years because that’s how many people on my Christmas card list haven’t seen it yet—I’ll bring a guest each year, and then look up in the sky to cower in fear of the Death Star that UPI will surely have built itself by 2089.

After reviewing Fat Man for the Daily Planet in 2007 and 2008, I let Nora Leinen do the honors this year so you could have a second opinion. She liked it, and so did just about everyone in the audience I saw the show with on Monday night—even the guy sitting by himself who lifted his finger poignantly in front of him when writer/director/actor Joseph Scrimshaw urged us to get in the holiday spirit and touch each other.

The name of Scrimshaw’s newly formed company—Joking Envelope, inspired by Freud’s observation that humor can be “an envelope for thoughts of the greatest substance”—seems to signal his interest in moving towards more intellectually ambitious productions, and among the plays of his that I’ve seen, Fat Man goes the furthest out in that direction. As Nora notes, there are some pretty weighty themes tucked in there among the jokes, and each time I see the show, those themes stand out more.

What if falling in love isn’t something that happens to you, it’s something you choose to make happen? If you’re the nicest person on Earth (actually the nicest person on Earth), is everyone just going to take advantage of you? What if there actually was a magical creature who gave everyone in the world exactly what they wanted every year, and that didn’t make the world a better place at all? You may or may not be ready to consider Scrimshaw the Albee of the Fringe, but you have to admit that Fat Man is a show that makes you laugh and makes you think.

A stageful of dancing beavers would probably be Albee’s worst nightmare, so it’s a good thing he’s not around to see Beaverdance (I think there’s supposed to be an exclamation point at the end of that word, but since my WAMplified! review, our type drawers have been fresh out of those) at Bedlam. I saw that show on Friday (Dwight Hobbes wrote the Daily Planet review), and this morning I found myself trying to explain to a barista why I was recommending it so strongly. “I wasn’t expecting much,” I started to say, then emended myself—this is a Foxy Tann show we’re talking about, after all. “It didn’t need to be much for me to enjoy it,” I finally explained, “but it was actually pretty great.”

What I mean is that you look at the poster (above) and you get the idea. You expect a running gag about all the fine beavers we have in this state, and as long as the schtick doesn’t get too stale over the course of a couple of acts, you can sit there and drink your Surly and you’ll have gotten your money’s worth. In fact, you get more than your money’s worth: the production scores on all fronts (heh heh, I said “scores on all fronts”). Writer Corrie Zoll finds an inexhaustible supply of amusing double-entendres somewhere inside him (I don’t want to know where), the songs by Marya Hart and Dan Pinkerton are at least as good as most of what you’ll hear in traveling musicals at the Orpheum (that may seem like absurdly high praise—I wish it were), and the performers shake their tails with gusto. It’s even genuinely sexy, a quality that seems to come more easily to shows at Bedlam than at any other venue in town. Maybe it’s something in the pierogies.