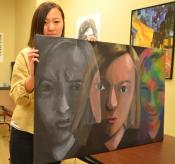 HeeSoo Kim wants to be a fashion designer and is already decorating shirts, shoes and jewelry for friends. A self portrait (top) and cutting human figures on black paper (bottom) help her explore different moods. (Photos by Jennah Benalshaikh)

Hee Soo Kim is different and proud of it. Whether it’s the way she does her hair or the art she creates, the senior at St. Paul Preparatory School keeps changing things up.

“I want to be unique,” said Hee Soo, who moved from Korea last year to attend high school in St. Paul.

In July, she had her hair long and wavy and wore a striped t-shirt under a big tunic with splashes of blue. Now her hair is chin-length, black and pencil straight, and she wears it proudly. Her look is simpler and more monotone – black jeans, white sweater, black jacket.

Last year, she drew detailed portraits with colored pencils. Now her work ranges from big, splashy self-portraits to book pages cut into lace-like patterns with X-ACTO knives. She wants to be a fashion designer and is working on her portfolio so she can get into a good art school after graduating in the spring. On the side, she has a business painting shoes and making jewelry.

The chance to experiment and be creative is a big reason Hee Soo, 19, decided to leave home when she was 17 to study at St. Paul Preparatory, a private high school where most students come from other countries.

Leaving family and friends behind

It wasn’t easy to leave her parents, younger brother, sister and friends to come to the U.S. But Hee Soo had big goals.

“I really wanted to go to college in the U.S.,” she explained.

To succeed at an American college, she needed to know English better. Attending an American high school would help.

At first, her parents were unhappy about the request because it would put her behind in school. Hee Soo was a junior in her Korean school, but differences between school systems meant that she would have to start as a sophomore in the U.S. But she persuaded her parents – Hee Soo’s father has a company that trades products with other countries and her mother helps him – and now they think she made the right choice.

High school in Korea is strictly for studying, Hee Soo explained, and art training involves repeating work over and over until it’s correct, or until the student is good at it.

“They don’t do anything really creative,” she said. In the U.S. she can be more creative and experiment with different styles.

Hee Soo’s drawings and paintings have won her national awards, a trip to New York City and a scholarship to a college art class last summer.

She submitted many of her art pieces last fall to the Minnesota Scholastic Art Show, hosted by the Minneapolis College of Art and Design. Her paintings won three gold keys, one silver key, two honorable mentions and a scholarship for the MCAD summer program.

Two of her paintings made it all the way to a national competition in New York City. One piece, “Seeking Attention,” a colored-pencil drawing of her grandmother’s dog, won a national gold key, the highest honor awarded at the competition.

Kate Woolever, Hee Soo’s art instructor at St. Paul Preparatory, said Hee Soo’s training in Korea gave her exceptional technical skill and a commitment to working hard – including before and after class. She shares her knowledge generously with her fellow students. In art class she offers to help people with their work and teaches them how to make it better.

“She is an outstanding student,” Woolever said. 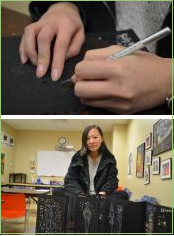 HeeSoo is my classmate, and she has helped me a lot in art class. Once when I was sketching my face for a self-portrait and Hee Soo was busy getting ready for her trip to New York, she stopped to help me get the eyes right. “Do it this way,” she said and drew an eye on another sheet of paper to show me how. In one part of the iris, she drew a semicircle to demonstrate how the eye reflects light. I hadn’t thought about that detail before.

But Hee Soo is modest about her skill. If someone compliments her artwork, she gets really shy and says it needs improvement.

Coming to the U.S. has allowed Hee Soo to study fashion and get a better sense of what other styles exist outside Korea. Hee Soo also wanted to experience living in a more diverse area. So her parents sent her to live with a host family in the Twin Cities.

She never dreamed she would travel to New York for a national art competition.

When she and Woolever went to New York, the Empire State Building was lit up in gold to honor the gold key artists. Hee Soo and her teacher attended the award ceremony at Carnegie Hall, where she was awarded her national gold medal.

They also went to artists’ talks, workshops and art galleries, and visited the Fashion Institute of Technology and Parsons The New School For Design.

After returning from the days in New York, she finished up her junior year, then headed home to Incheon, Korea, to see her family. She came back to the U.S. on July 13 so she could attend summer classes for two weeks at MCAD. There, Hee Soo stayed on campus and lived the life of a college student. She started out each day with liberal arts or a basic drawing class, and then painted from 1 p.m. to 5 p.m. every day.

She also had to speak English all the time at MCAD because the other students were American. At St. Paul Preparatory, more than 80 percent of students are from other countries, including many from South Korea. So when she’s not in class, Hee Soo can speak Korean with her classmates.

“I am learning the real American culture,” Hee Soo said.

She also earned two college credits and learned a lot from her fellow students.

“I am motivated by them.”

Ultimately, Hee Soo doesn’t plan to be a painter. Even though she likes the craft, it’s too much of the same. She likes that fashion is always changing and believes that clothes help define people.

Hee Soo plans to study fashion design and marketing in college and use her talent as an artist to become a fashion designer. She is also starting an online store where she sells some of the clothes, shoes and jewelry that she has made.

Woolever believes in her student’s future: “Whatever she does, she will be successful.”