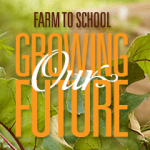 Farm to School: Growing Our Future is the first film in the University of Minnesota-sponsored Public Health Film Festival on April 2-6. The film festival, part of the nationally-observed Public Health Week, has a lineup spanning a spectrum from documentary films to vintage sex ed comedic shorts. The films are all open to the public and address public health issues from sexual health to end-of life decisions.

The locally-made Farm to School: Growing Our Future opens April 2 with a look at the growing farm to school movement in MN.  The film begins with some scary statistics: one third of children in the US are overweight or obese, if obesity rates continue to climb this generation of children will be the first to have a shorter life span then their parents, 31 million kids in the United States eat a meal at school. Farm to School programs were started as a way to bring in healthier options to cafeterias across the state. The film highlights schools that are growing their produce and/or buying from local farmers. These efforts are not without struggle – some parents have complained that menu changes have been too drastic with the omission of “kid friendly foods,” such as chicken nuggets. In addition, schools are not equipped with the budget or production abilities to make 100 percent of meals from scratch. The film offers a solid introduction to the concept of Farm to School, and the barriers and victories in a movement that is just beginning. Following this and all festival film screenings there will be a Q & A /discussion lead by community leaders , film makers,  and/or specialist in the field.

The remainder of the festival has a little something for everyone. Two films will look as health as a human right. Crossing Midnight chronicles the often preventable health struggles of ethnic minorities in war-torn Burma. Minnesota is home to the largest number of Karen refugees from Burma in the United States. One Bridge to the Next looks at the courageous work of Dr. Jim Withers who has devoted his career to going under bridges to find and treat homeless individuals who need medical care. We Were Here provides an honest and devastating picture at the AIDS epidemic in the 1980s as it affected the Gay, Lesbian, Bisexual, Transgender, and Queer (GLBTQ) community in San Francisco.  How to Die in Oregon lets you in on the very private and difficult decisions terminally ill patients make when deciding if/when to end their life by physician assisted suicide. The festival ends with two films on sexual health; Orgasm Inc, about  sexual dysfunction in women and the pharmaceutical companies’ race to cash in, and finally a little comedy with vintage sex ed shorts from the 1950s and 70s.  Go here for trailers and the full film schedule.