“Bon Jovi in the house!” People Serving People client Nailon Copeland stood in the lobby of the organization’s downtown Minneapolis headquarters Thursday afternoon, shaking his head in disbelief as Jon Bon Jovi, one of the world’s biggest rock stars, stood shaking hands and signing CDs. “This is trippin’ me out. I thought they were kidding when they said this was going to happen.”

Bon Jovi, in town for a two-night stand at St. Paul’s Xcel Energy Center with his eponymous band, visited People Serving People as part of what he calls a “fact-finding” mission he’s undertaken while his band tours the country this spring. Bon Jovi has long been involved with charitable causes involving homelessness and affordable housing, and he’s considering new directions for the work of the Jon Bon Jovi Soul Foundation.

After touring the facility, which has been heralded as a national model for its under-one-roof integration of shelter and services for families experiencing homelessness, Bon Jovi was impressed—to say the least. “This is by far the most remarkable place I’ve seen,” said Bon Jovi, whose experiences thus far on the tour have taken him to L.A.’s Skid Row and to a Seattle facility for homeless alcoholics.

WCCO’s Jason DeRusha, interviewing Bon Jovi for one of DeRusha’s trademark “Good Question” segments, got right to the point. “Right now,” he said on camera to the man who’s sold well over 100 million albums, “you could be sitting at home counting your money.” Why take the time to visit homeless shelters? 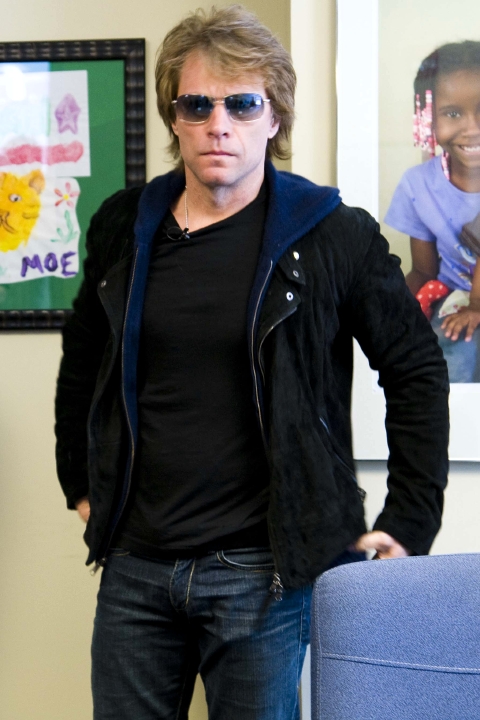 Bon Jovi answered DeRusha’s question for the benefit of WCCO viewers, but he had also addressed the issue a few minutes previously while talking with reporters and catching his breath in a conference room. “Homelessness hits everyone,” Bon Jovi explained. “Republicans, Democrats, everyone. When people are afraid of the homeless, it’s because they’re afraid of the unknown. When you meet a woman with young children who’s suddenly found herself without a home, that’s the face of homelessness today.”

Citing the work of his Philadelphia-based foundation, which has built affordable housing units across the country, Bon Jovi emphasized that he understood there was no single approach or magic bullet that would end homelessness. “The strokes are broad,” he said, “and the needs are many.” Bon Jovi praised the work of People Serving People, whose CEO Jim Minor sat smiling beside the singer, and particularly the organization’s work with homeless families.

And then it was time to head off to the Xcel Center for soundcheck. On his way out, Bon Jovi stopped to pose for a photo with People Serving People staff and to greet mothers and their young children outside the facility—even holding a baby for a few moments before climbing into his black SUV and heading off to work. 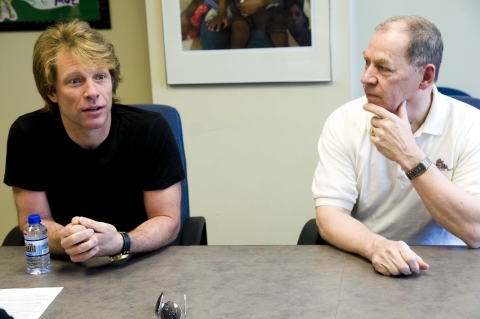 Jon Bon Jovi with Jim Minor (above) and Jason DeRusha (below). 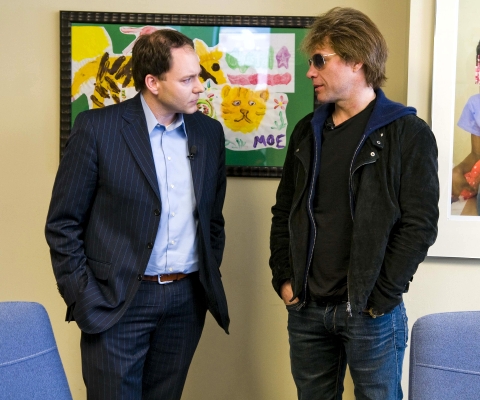 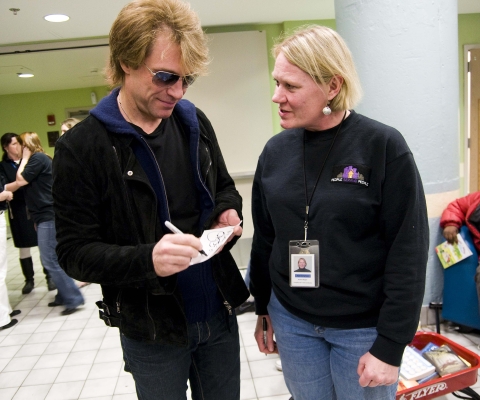 Bon Jovi signs an autograph for a PSP staff member.