In the past decade, tens of thousands of families have received cash- and non-cash assistance through the Minnesota Family Investment Program (MFIP). Administered by the Minnesota Department of Human Services (DHS), the program is intended to “help families work their way out of poverty by expecting, supporting and rewarding work,” according to a DHS fact sheet. The number of families on MFIP decreased from 2002 to 2007, as the program helped famlies to transition off the program and into jobs.

With the recession and increasing unemployment, the number of families on MFIP has risen over the past two years and is projected to increase even more through 2012.

This is the second of two articles about welfare-to-work in Minnesota. See Part 1 –  MFIP by the numbers – Running out of time and money in Minnesota. 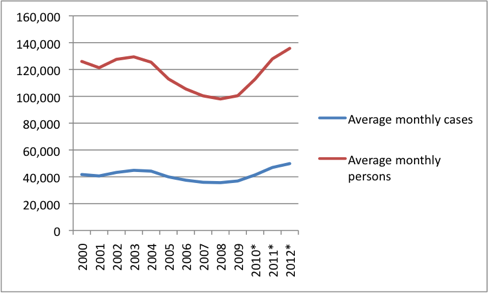 Those MFIP “cases” are actually Minnesota families – around 100,000 people per month in 2009 (including some “child-only” cases). Some demographic information from DHS tells more about the families participating in the program:

Fowsia Abdi, a human service representative for Hennepin County, said that what she likes about the MFIP program is that if a client is able to find work, they can still get daycare and foodstamps.  Also, if they lose their job, they can get a first day interview to begin receiving cash assistance again, and may receive expedited food support.

Many of Abdi’s clients have gone on to find work, and in some cases she doesn’t hear from them again.  However, with the fall in the economy, she has seen an increase in returning clients in the past couple of years.  The other day she met with a person who had been working for four years and once again needed assistance.

Abdi said that the human service representatives provide an important role in the program, because they can help clients with all the paperwork that needs to be filled out.   “I make sure the clients get everything they need,” she said.  “I help keep them up to date with all their verifications.”  Abdi said that since many MFIP clients are already in distress, the paperwork can be very overwhelming.  A representative might help facilitate discussions with a client’s landlord, or suggest resources that they might not b aware of.  Abdi said she also passes information on any jobs that she hears about to her clients.  “Making that human connection is the most important thing,” she said.

MFIP relies on a combination of state and federal funding. (See chart below.) Since 2000, annual payments have ranged from $262 million (in 2006) to $336 million (in 2003). The state’s share has fluctuated between 16 percent and 35 percent but is projected to increase. Federal funding, which pays for the majority of the program, is expected to decline, in comparison. 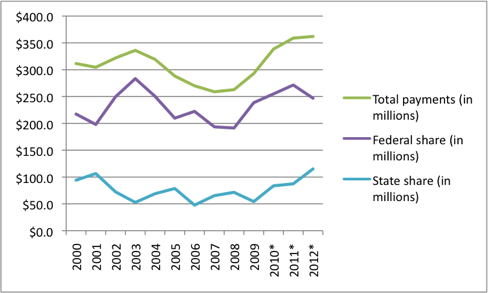 The MFIP program has a federally-mandated 60-month lifetime limit on benefits. The 60-month limit clock began ticking in July 1997, setting the “time-off” mark for the state’s first group of MFIP recipients at the end of June 2002. A DHS report titled The welfare time limit in Minnesota: A survey of families who lost MFIP eligibility as a result of the five-year time limit (July 2003) focused on the families who had their cases closed in June 2002.

In the fall of 2002, 130 of those 210 “timed-off” recipients responded to a DHS survey. The results painted a picture of families “generally in poor shape economically …” with “unstable and troubled lives …” and “extremely low levels of self-sufficiency.”

Their average income was $1,100, and 72 percent had income below the federal poverty line. Less than half (45 percent) of the parents were working, usually in low-paying service jobs. Their median wage was $8.87, and only 16 percent had been offered health care. Almost all received separate, non-cash assistance.

Interviewers who conducted the survey rated half of the timed-off families as having “unstable, even chaotic” lives, while only 6 percent were rated “fairly stable.”

Many had also been sanctioned for noncompliance to MFIP work requirements. Of the timed-off cases, 80 percent were sanctioned at some point during their MFIP tenure – 30 percent of them during their 60th month, disqualifying them for an MFIP extension for the rest of their lives, according to the 2003 report.

Every month since, more people join the ranks of the timed-off. A year later, at the end of June 2003, 1,551 cases had been timed off cash assistance.

In January 2010, DHS published its fourth report examining MFIP cases that had reached the 60-month time limit – 12,622 since the program’s inception. One-third (4,267) of those were still open and being paid, many of them due to extension.

The report compared the recipients that had counted 60 months by December 2008 with other MFIP-eligible adults – they made up 14 percent of the total pool. Similar to the earliest timed-off cases, many were in dire straits. The report gives a demographic profile: individuals at the 60-month mark were more likely to be female, black, a U.S. citizen, and have a history of chemical dependency or a serious mental health diagnosis, according to the report.

The report also looked at the fate of the 108 cases that reached the 60-month limit in December 2008. (Between December 2005 and December 2008, an average of 119 cases reached the limit each month.) One month later, 58 of the cases were still open. The other 50 had been closed, but 44 remained on food assistance.

By June 2009, six months later, 51 of the 108 were still MFIP-eligible, 38 of them through extension. Almost all (48) were eligible for Food Support even if not for cash assistance. Every one of the 108 cases had at least one household member eligible for Medical Assistance.