Jessica Beckwith gave birth to her daughter, Toren Bailey-Beckwith, last week in what looked like an oversized kiddy pool filled with 100-degree water.

Beckwith, a University of Minnesota alumna, was one of the first patients to have a water birth at the Riverside campus of the University Medical Center, Fairview. The hospital went live with the water birth option in October, caving in to years of patient and staff requests for the more natural birthing method.

It was one of the last hospitals in the Twin Cities to adopt the procedure.

The hospital’s decision to facilitate water births — and the national shift toward the practice — is mostly consumer-driven. Before it was an option, some patients transferred to other hospitals that offered water birthing facilities.

The American Academy of Pediatrics doesn’t endorse water birth, and little-to-no research about the practice has been published in the U.S., said Ann Forster Page, Fairview’s lead certified nurse-midwife.

Since it became an option, about eight patients have used the service. One patient drove an hour and a half from rural Minnesota to get in the tub.

If the mother and child are healthy and normal, water birth feels pleasant and hasn’t been shown to cause adverse effects, Forster Page said.

There is no risk of a baby drowning, because until the baby reaches the air, oxygen is supplied via the umbilical cord, explained Karen McMenimen, a certified nurse midwife on the team at Fairview-Riverside. There’s no stimulus to breathe while the baby is underwater, as he or she is leaving and entering a “warm, wet environment,” McMenimen said.

Surrounded by her husband, mother and two midwives during her home water birth earlier this year, Mendota Heights resident Sarah Weisbecker said she felt extremely peaceful and calm, like she was floating. It was “a hundred times different” than her first birth, which required drug-induced contractions and a vacuum extraction, she said.

“Laboring women love to be in the water … that’s where women gravitate,” said Heather Jelinek, a student nurse-midwife at Fairview-Riverside.

Jelinek will become a certified nurse-midwife in December after she completes her Doctor of Nursing Practice degree at the University. As a registered nurse, Jelinek has assisted with more than 20 water births, which received rave reviews.

“Finally, with this policy, we’re saying you can be in the tub!” she said.

The rooms at Fairview always contained regular bathtubs for “hydrotherapy” during labor. Patients would sit in the tubs prior to delivery to relax during contractions, but they would still have to deliver out of the water.

“It interfered with the process and the beauty of the birth,” Jelinek said.

The midwifery health care model views childbirth as a natural process and tries to reduce or eliminate interventions like giving mothers epidurals to numb them during labor, Forster Page said.

Women at Fairview have to sign a “water birth agreement.” The procedure is not safe if the patient has a fever, heavy bleeding or requires narcotics. 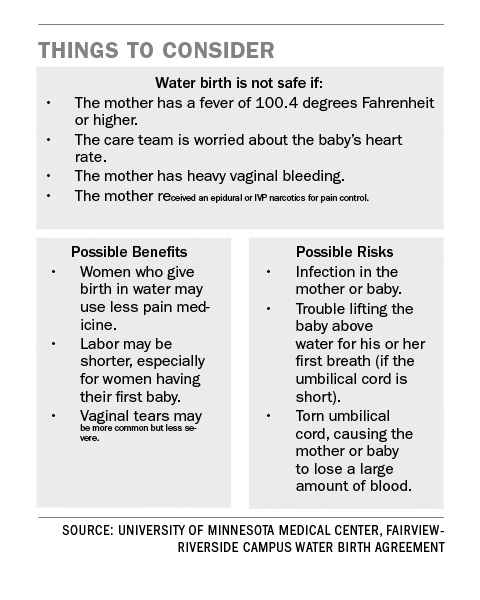 In the Twin Cities water birth scene, Woodwinds Heath Campus has a decade of experience.

Within a year of the hospital’s opening in 2000, it began offering the option, said Jeanette Schwartz, the clinical leader of maternity care at Woodwinds. Since then, none of the patients or babies has gotten an infection as a result of being in the water, she said.

Now, a staff of eight doctors and 19 midwives facilitates more than 25 births a month.

World-wide research suggests no increased medical risk for water birth. In fact, it shows that women who give birth in water may use less pain medication, are in labor for shorter periods of time and undergo less severe vaginal tearing.