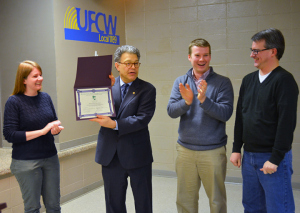 U.S. Sen. Al Franken has been at the forefront of congressional efforts to push the Obama administration to negotiate strong labor standards into the free-trade deal Obama has declared his top trade priority. Those efforts drew recognition yesterday from the Minnesota Fair Trade Coalition, which presented the senator with its Fair Trade Leadership Award.

Franken took two actions regarding the Trans-Pacific Partnership, the 11-nation trade deal being negotiated out of the public eye, that drew praise from fair-trade advocates in 2012.

First, Franken sent a letter to the U.S. trade representative in charge of TPP talks urging greater transparency in the negotiations.

In November Franken convinced 24 of his Senate colleagues – including Amy Klobuchar of Minnesota – to sign onto a letter urging the president to include specific protections for U.S. workers in the TPP, including enforceable labor standards and “Buy American” provisions.

“That letter was big for us, and Sen. Franken was the co-author,” Wise said.

Franken accepted the award during the coalition’s member assembly at the United Food and Commerical Workers Local 1189 hall in South St. Paul.

The coalition does not give the award annually. The last recipient of the award was U.S. Rep. Keith Ellison in 2010.