The renovation and reconstruction of several University of Minnesota buildings will have to wait another year after funding was cut late in the legislative session.

A bonding bill that included almost $110 million for the University failed days before legislators adjourned, leaving projects across campus unfunded and some at the school disappointed.

But the original bill failed to get the votes needed to pass, and buildings like the Bell Museum of Natural History and Tate Laboratory of Physics will remain the same a year longer.

The bill also allocated $35 million for upkeep and renovation of University buildings.

A smaller bonding bill was later passed but funded mostly renovations to the state Capitol. 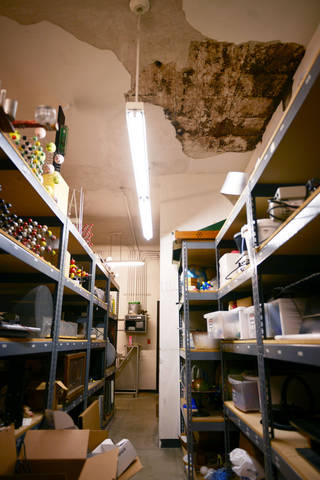 Right: Water damage litters the ceiling of the demonstration center in the Tate Laboratory of Physics. Due to cuts in the bonding bill, the Tate Lab will not receive funding for renovation and structural repair. (Photo by Jaak Jense)

Staff at the Bell Museum had hopes for almost $50 million in state funding to help open a new museum with a 120-seat planetarium on the University’s St. Paul campus.

The museum’s current building is about 70 years old and has some structural problems, including occasional flooding in the basement, which can put exhibits at risk.

It’s also too small to host school groups larger than about 150 students, Weller said, which is the museum’s biggest drawback.

“It limits how well we can serve the schools and the local community,” she said.

The current building has other space limitations, Weller said, including a 20-seat theater, where tickets are often gone quickly and some are denied admission to events.

This year’s attempt for a new museum isn’t the first — officials have pushed for a new facility since 1995, and the University included the museum in its capital request for the first time in 2008.

With help from Rep. Alice Hausman, DFL-St. Paul, the new museum was closer to a reality this year.

“This time we got very close, so it’s probably that much more disappointing,” Weller said.

At the Tate Lab, officials hoped for $6 million to begin planning renovations for the 86-year-old building.

“Even though we’ve done things over the years to try to keep it up-to-date, it’s not in any sense a modern building,” said Ron Poling, head of the School of Physics and Astronomy.

The “old-fashioned” building, where about 4,000 students take introductory physics and astronomy each year, has issues with space in its lecture halls and accessibility, Poling said.

The $6 million requested from the state would be to fund two-thirds of the planning costs of the $85 million total renovation project.

“[The Tate Lab] is where we do our physics educating and it’s extremely important for us to be able to get those facilities updated,” Poling said, “because there are a lot of students who are very dependent on our doing that job well.”

These funds are for “emergency, critical, hold-the-place-together kind of projects,” Pfutzenreuter said. “To not get any of those dollars at all, we’re very disappointed.”

The Legislature passed a smaller bonding bill, but it mostly provided funding for state Capitol repairs and offered no funding for University projects.

Pfutzenreuter said this year’s “unmet needs” will be added to next session’s bonding request.